Deontay Wilder: ‘Anthony Joshua has NO interest in fighting me’ 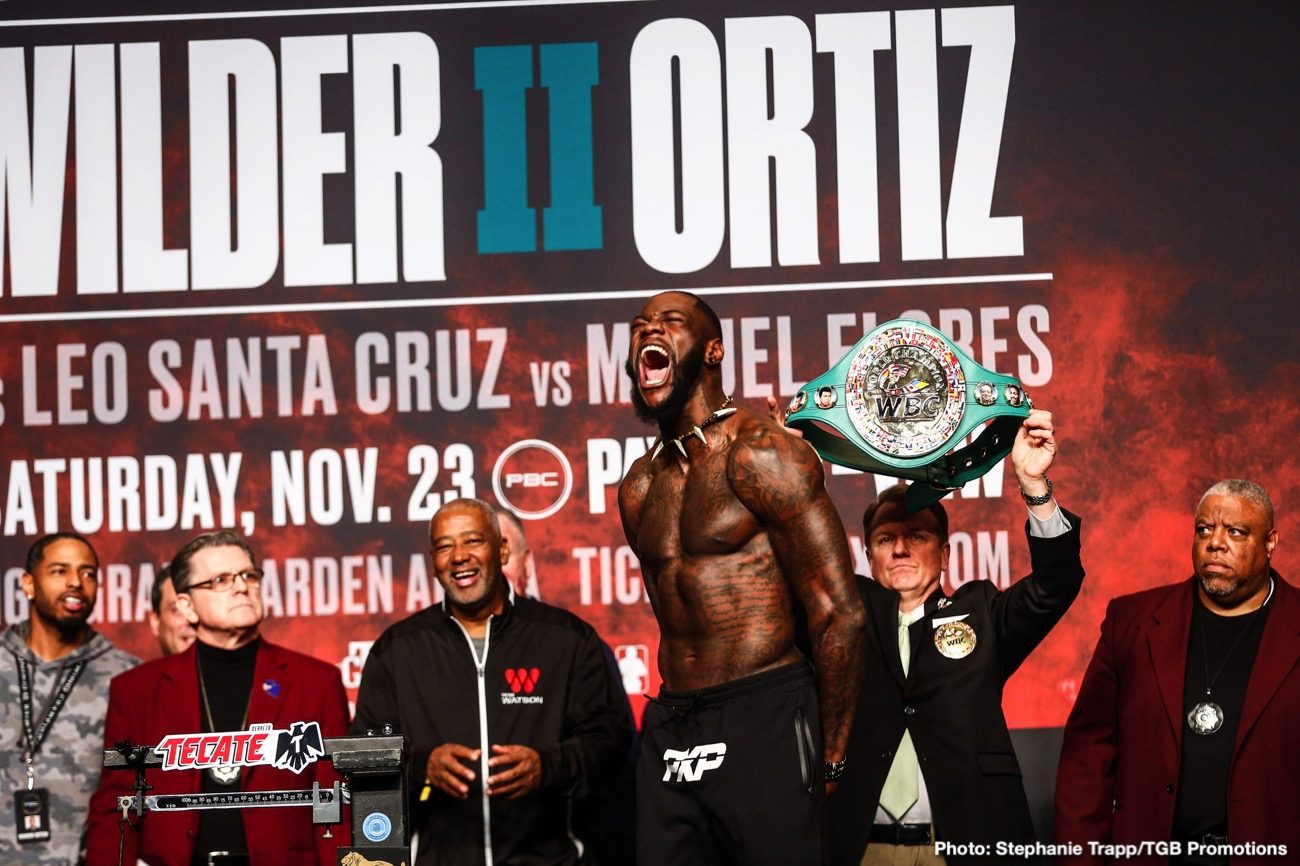 By Scott Gilfoid: Deontay Wilder says he’s given up hope entirely on getting a fight against Anthony Joshua in the future, because the man just doesn’t want to fight him. With years of wasted effort, Wilder (41-0-1, 40 KOs) says he’s tried long enough to lure Joshua (22-1, 21 KOs) into fighting him, and he sees it as a lost cause. The 2012 Olympic gold medalist Joshua just doesn’t fancy the job.

As such, WBC heavyweight champion Wilder won’t be using up anymore of his precious time pursuing a fight that is undoable due to a lack of interest on Joshua’s part. For that reason, Wilder is hoping that IBF/WBA/WBO champion Andy Ruiz Jr. (33-1, 22 KOs) does a number on Joshua again in their rematch in 2 weeks from now on December 7. Like many people, Wilder thinks Ruiz will blast Joshua out again, and send him back home in defeat like he did last June.

Wilder: Joshua has ALREADY stated he doesn’t want to fight me

“Make sure that cut is healed, because I’m coming for it,” said Wilder to IFL TV about Tyson Fury in their rematch on February 22. “Andy [Ruiz] knows what he has to do. He doesn’t need to change nothing from what he did the first time. I’m looking for him to defeat Joshua the second time. He has all the momentum, and courage for himself. He knows what to do, and I think he’s going to be victorious..

“I think it’ll be great for boxing if he wins, because after he wins, we can finally have a unification,” said Wilder. “It’s not the case if Joshua wins. He’s already stated that he has no interest in fighting me no more. In the heavyweight division, it’s all about unifying the division. The heavyweight division is too small to have so many belts lingering around,” said Wilder.

So there it is. Wilder says Joshua has NO interest in fighting him, and that’s why he’s counting on Ruiz to beat him again. Wilder and Ruiz both share the same goal of wanting to unify the heavyweight division. If Ruiz wins the rematch with Joshua, then it’ll be much easier for Wilder to accomplish that goal than if Joshua wins. Moreover, Wilder and Ruiz share the same promoter, and they’re not going to block the fight by talking about flat fees or whatever.

Tyson Fury’s horrible is going to be a target for Wilder on February 22, and he made have made a mistake in trying to slip in another tune-up against Otto Wallin. Fury could have fought Wilder in an immediate rematch after their 12 round draw last December, but he went along with his promoter’s plans of having him fight warm-up fights against Wallin and Tom Schwarz. This backfired on Fury.

Wilder rooting for Ruiz because he wants to fight him

“When you have two fighters that are in the same agreements on that, then you have no choice but to go for that fighter to win,” said Wilder about Ruiz being willing to fight him but NOT Joshua. “There should be one champion in the heavyweight division, not many. Ruiz understands that, he recognizes that, and that’s what he wants, and he wants me next. So how can I go against him. Go Ruiz,” said Wilder.

If Ruiz wins his rematch with Joshua, he’ll still likely need to fight consecutive mandtories against Oleksandr Usyk and Kubrat Pulev. Both of those are due at the same time. Unless the sanctioning bodies allow Ruiz to fight a unification match against Wilder, he’s going to be busy all of next year defending against Usyk and Pulev. Ruiz has already said he’s not going to vacate any of his titles.

Luis Ortiz was avoided because of his IQ – Wilder

“None of these guys were willing to fight him,” said Wilder about Ortiz. “He was forced to fight lower opposition, because of his intellect in the ring, and his skill level. This guy had 500 fights in his career between amateur and professional, and that’s a hell of a lot of fights and a lot of experience to have.

“I’m excited to give him the opportunity again. People say, ‘You are crazy, why are you doing this age? But I feel like it’s my duty. I feel like with the platform that I have, I must shine the light on him, and bless him, because this man has a family,” said Wilder.

I totally agree with Deontay. Ortiz has been avoided like the plague by the top guys in the heavyweight division in the last six years. The only talents that had the courage to face Ortiz is Wilder and Bryant Jennings, and they had all they could handle against him. Joshua’s promoter Eddie Hearn never showed the slightest amount of interest of having him face Ortiz. The same goes for Dillian Whyte. The WBC wanted him to fight Ortiz in a title eliminator. So what does he do? He fights Dereck Chisora instead, and then bellyaches why the WBC didn’t make him the mandatory for Wilder.