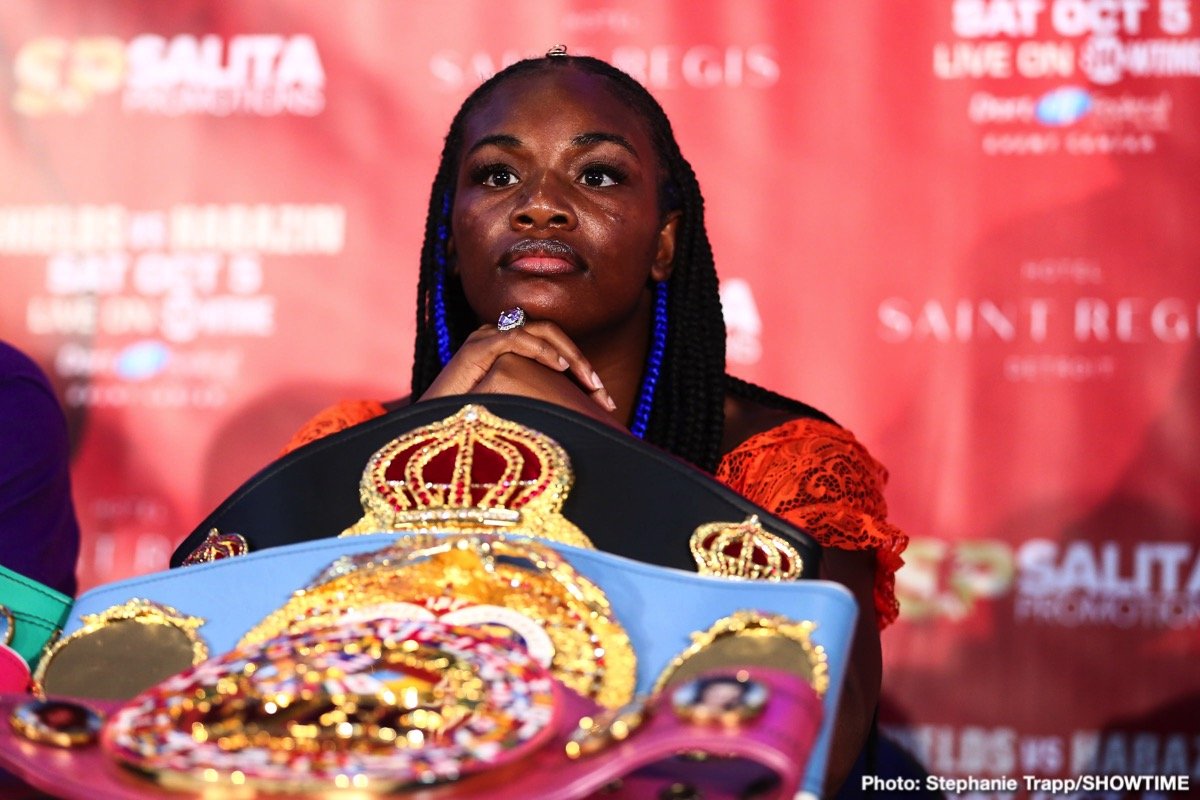 Savannah Marshall is characteristically cool when summing up her face-to-face meeting with rival Claressa Shields.

Marshall (8-0, 6 KOs) famously beat Shields (9-0, 2 KOs) in the amateurs and with the American having since turned professional and become unified middleweight champion, a colossal rematch looks on the cards.

The pair both attended Saturday night’s #MTKFightNight at York Hall and Marshall wore a contented smile as Shields conducted an iFL interview with enthusiasm.

Reflecting on their subsequent face-off, Marshall said: “To me, she’s just another future opponent so it was no biggie but I enjoyed it and it amused me.

“I knew she was going to be at the #MTKFightNight and therefore I wasn’t surprised to be asked to do a head-to-head with her.

“I’ve seen so many emotions from Claressa over the fight we had but she seemed pretty mellow about it on Saturday.

“Our rematch could 100% be the biggest fight in women’s boxing but I don’t care about the location. Hartlepool Social Club would work for me!

“I know she is keen to stress she was younger when we first fought but I consider myself a late bloomer in terms of my strength too. There have been massive improvements in my power.”

Marshall was at the event to support close friend Chantelle Cameron, who blasted to WBC world super-lightweight mandatory status while Shields watched on from ringside with sparring partner Hannah Rankin.

WBC, IBF, WBO and WBA world middleweight champion ‘T-Rex’ is in the UK sparring Hannah Rankin ahead of the latter’s own world title tilt and will travel to London to watch a bill that includes Chantelle Cameron’s WBC world super-lightweight title final eliminator against Anahi Ester Sanchez.

As she prepares for her first visit to an iconic venue, Shields is eager to see another leading light of women’s boxing in Cameron up close and personal.

Shields said: “I like Chantelle Cameron’s boxing skills. I believe it was last year I became a fan. I don’t know much about Sanchez but I know Chantelle has a lot of power in her punches.

“As well as the power, Chantelle moves her head well and has great balance. That makes her a good fighter and I’m excited to see her match up-close and in person.

“It’s exciting times to be a female boxer right now. We have had super-fights and there are many more to come. The money is going up and so is the TV time. I’m happy but never satisfied!”

Shields has previously been linked to a future clash with former elite amateur rival Savannah Marshall but with Hartlepool’s boxing heroine likely to accompany Cameron into the ring, the American insists there’s no bad blood between the two.

Shields said: “I have no beef with Savannah Marshall. I’m just a fighter who wants to avenge a loss from my childhood! Other than that, I’ve seen her before at Floyd Mayweather’s gym and we were friendly.

“I don’t hate Savannah. I don’t know who created that narrative. I’m the two-time Olympic champion, an undisputed champion and a two-division champion, so my career is going great.

“Being an icon for women’s boxing is great. I feel like I set a new wave and put a new perspective of how people look at women’s boxing. There’s a lot more respect.

“My message to the youngsters wanting to take up boxing is to not be afraid to be different and always follow your heart. The reason I box is because I love it. I love fighting, the art of war and I just love competing. So if you have that too, do it!”

The undefeated ‘Il Capo’ (11-0, 7 KOs) collides with Argentina’s three-weight world champion Sanchez (19-4, 11 KOs) on the #MTKFightNight at York Hall on November 9 – live on ESPN+ in association with Top Rank and on iFL TV worldwide.

Cameron, who remains the reigning WBC Silver champion at lightweight, said: “Sanchez is a good opponent who has been around. She’s had a lot of world title fights and had good fights with Katie Taylor and McCaskill.

“She has a good boxing brain and knows what she’s doing in there but I’m confident that I’ll simply have too much for her on the night.

“She carries power too but as I showed against Basheel, I’ve got power AND I can box. I’m not concerned by her power because I won’t be taking clean shots. We’ll see if she can take mine in return.

Chantelle Cameron is blasting her way towards a dream world title

Chantelle Cameron can become a mandatory world title challenger in a second weight division on November 9.

Having already become WBC No. 1 and earned a shot at Katie Taylor by outclassing the fearsome Anisha Basheel, undefeated ‘Il Capo’ (11-0, 7 KOs) is preparing to collide with Anahi Ester Sanchez (19-4, 11 KOs) on a colossal #MTKFightNight at York Hall.

The winner of the final eliminator books a shot at America’s WBC and WBA world super-lightweight champion Jessica McCaskill – a former opponent of Sanchez.

While speculation over mouth-watering potential world title match-ups continues, Cameron remains solely focused on blasting aside Sanchez in the knowledge victories will make it impossible to deny her the chance to achieve her dream.

Cameron said: “I’ve been tipped to challenger Katie Taylor for a world title for a while but I’m not waiting around.

“I’ve got my own career to focus on and whether my world title shot comes against Taylor or against McCaskill, I don’t really care.

“Since the Basheel fight, I’ve been working on a lot of technical stuff with my coaches Jamie Moore and Nigel Travis; adding more speed, angles and head movement to my game.

“Basheel had raw power but Sanchez will try and box as well so it’ll be a higher-level fight technically.

“Basheel came over here with a bad attitude and I gave her a lesson. Sanchez will have more respect because she’s been in with world champions but if she wants to come with attitude, that’s her problem.

“I will not take anyone’s s*** so it depends how she turns up. If she comes with attitude, she’ll get some attitude back.”

The event will be broadcasting live on ESPN+ in the US in association with Top Rank and on iFL TV worldwide.