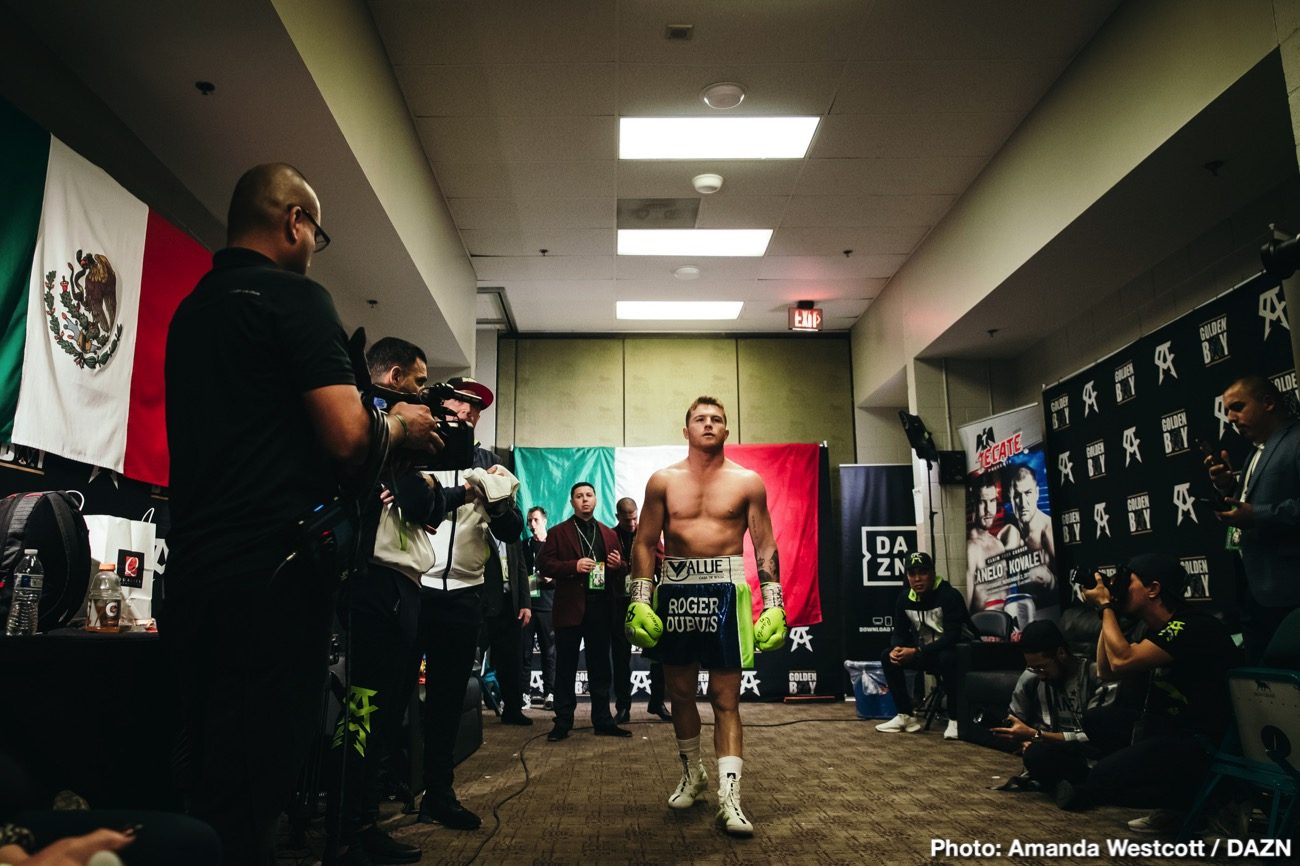 By Aragon Garcia: Saul Canelo Alvarez showed off some SILKY smooth defensive moves in helping out Oscar Valdez in the gym to help him get ready for his super featherweight match against Andres Gutierrez on November 30.

Canelo showed the unbeaten Valdez (26-0, 20 KOs) how to duck slow, move his head and position himself to land shots.

Canelo is helping out the other young fighters like Valdez and Ryan Garcia at his trainer Eddy Reynosa’s gym. The superstar Canelo is coming off of one of the best wins of his incredible career in stopping WBO light heavyweight champion Sergey Kovalev in the 11h round on November 2 in Las Vegas, Nevada.

Canelo showed that his skills transcend any weight class

The doubters thought Canelo (53-1-2, 36 KOs) couldn’t do it, but he proved them wrong in moving up two weight classes to dethrone Kovalev.

Canelo hasn’t said yet what his plans are for his next fight in May. He’s got the options of staying at 175 to unify or he could move up to cruiserweight or down to 168 or 160.  Canelo is the hero who strides through weight classes, never tasting defeat.

In giving up his WBO 126-lb title, Valdez is clearing the way for fellow stablemate Shakur Stevenson to go after his title. Stevenson is a 2016 Olympic silver medalist, and seen by some as the next Floyd Mayweather.

Valdez is fighting his third match since his grueling 12 round decision win over Scott Quigg last year in March. Although Valdez won the fight by a lopsided decision, it was a costly one for him due to him suffering a broken jaw.

In the co-feature bout on the card, former two division world champion Carl ‘The Jackal’ Frampton (26-2, 15 KOs) will be taking a stay busy fight against Tyler McCreary (16-0-1, 7 KOs) in a 10 round scheduled fight at super featherweight. The fight will be at a catchweight of 128 pounds.

Frampton, 32, lost his last fight to International Boxing Federation featherweight champion Josh Warrington by a 12 round unanimous decision on December 22 in Manchester, England. The effort that it took for Frampton to make the weight left him drained, and without energy to give a good effort. Warrington took advantage of the situation to outwork Frampton to win the fight by the scores 116-113, 116-112 and 116-112.  The fight was highly exciting despite Frampton not being at his best.

“I’m delighted to be making a comeback after what has been a horrific year in my career,” Frampton said. “I didn’t get the Top Rank deal off to an ideal start, but coming back in Vegas is great for me, especially against a really strong opponent. It needed to be someone who would test me.

Frampton is still fighting at a high level, but he needs to be campaigning in a weight class that supports his body size.