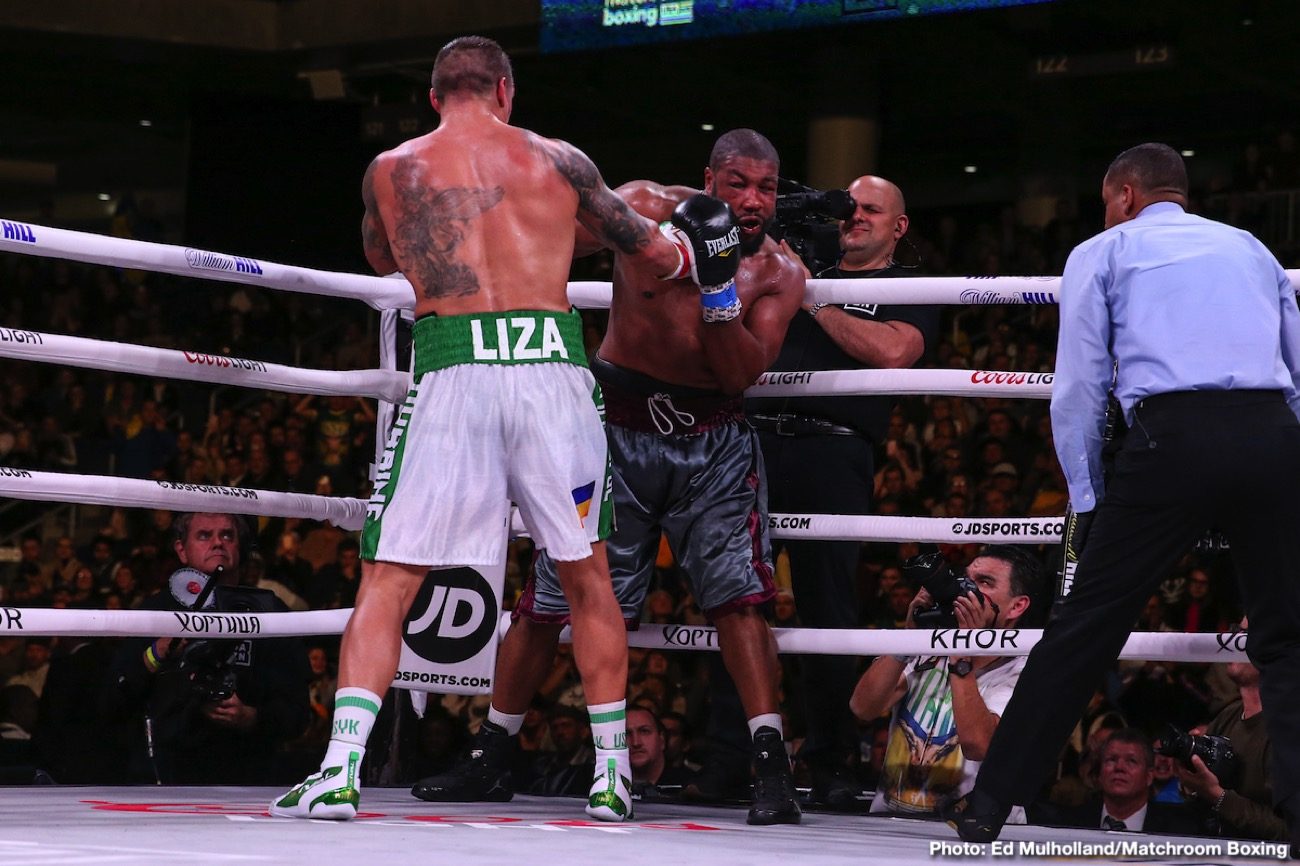 By Dean Berman: Oleksandr Usyk did his part in beating Chazz Witherspoon last Saturday night in his heavyweight debut, and he now says he’s ready to fight for a world title against the Andy Ruiz Jr. vs. Anthony Joshua winner of their rematch on December 7.

Usyk (17-0, 13 KOs) says he’s also interested in challenging WBC heavyweight champion Deontay Wilder next, and he’d be willing to fight him in the United States, since he doubts he would come to Ukraine to face him.

Showing a lot of skills that most heavyweights would envy, Usyk (17-0, 13 KOs) essentially carried the 38-year-old Witherspoon (38-4, 29 KOs) to the 7th round before stopping him. Usyk backed off from Witherspoon in round 5 after having him in trouble on the ropes. At that point it was clear that Usyk was getting in rounds to show off his boxing skills, and to sharpen up.

Usyk, 32, had been out of the ring for 11 months since his fight with Tony Bellew last September. Usyk had planned on returning much earlier to the ring, but a biceps injury sustained during training led to him being out of action.

“I was thinking because I hadn’t fought for a long time, I could have some mental issues, but everything went well,” said Usyk to IFL TV. “And I think this guy performed even better than the one that was supposed to fight earlier,” said Usyk about Witherspoon fighting better than what his originally scheduled opponent Tyrone Spong would have.

Witherspoon landed some nice shots in the first several rounds. Usyk’s face was marked up from Witherspoon’s power shots, and he looked like he’d been in a really tough fight. When Usyk does face the Joshua vs. Ruiz rematch winner, he’ll need to put more emphasis on his defense. Getting hit by those guys is a much different proposition than getting hit by old and out of shape Witherspoon.

The reactions from boxing fans were mixed about Usyk’s performance against Witherspoon. While some fans loved the technical skills former unified cruiserweight champion Usyk displayed, other fans thought he looked small, weak and slow.

Recently, Wilder said that Usyk isn’t a threat to him, because he’s not big enough. Usyk weighed in at just 215 pounds against Witherspoon, and he looked to be about the same size as when he was fighting at cruiserweight. There was no real difference in Usyk’s size.

Wilder is scheduled to defend against Luis Ortiz on November 23 in a rematch. If Wilder is successful in defending against Ortiz, he’ll be facing lineal heavyweight champion Tyson Fury in a rematch.