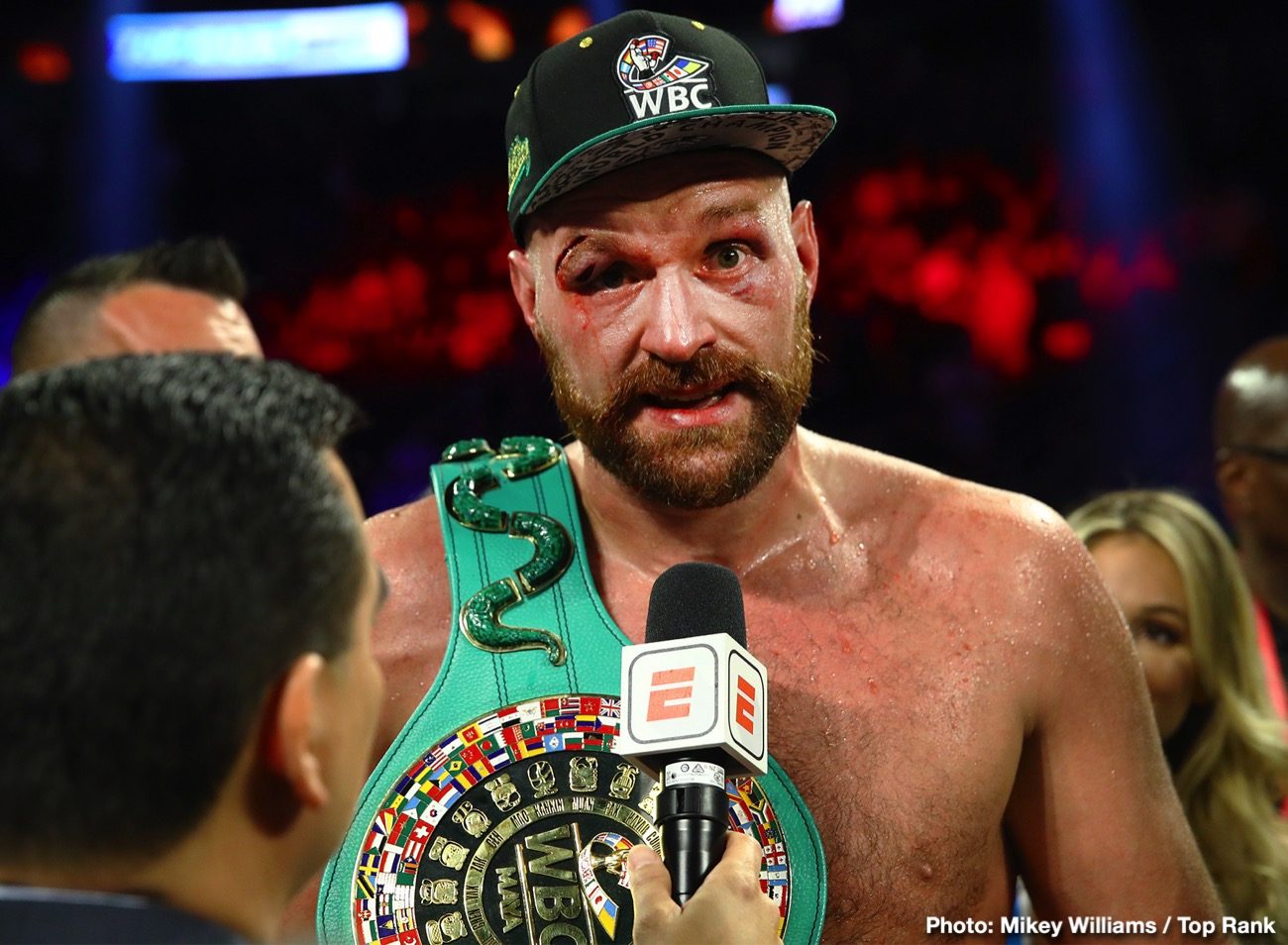 By Charles Brun: Lineal heavyweight champion Tyson Fury could be on his way out of the sport of boxing, according to Matchroom promoter Eddie Hearn. Fury has become involved with the WWE, and he has a scheduled match against WWE wrestler Braun Strowman on 31 at the “Crown Jewel” event in Saudi Arabia.

Fury (29-0-1, 20 KOs) also has a single coming out with singer/entertainer Robbie Williams for Christmas. Given all the opportunities that Fury has outside of the sport of boxing, it’s possible that his days in the sport are numbered.  Fury is making good money outside of boxing, and he’s already wealthy beyond imagination. At this point, Fury doesn’t need the sport to live a good life. If his WWE gig lasts, he could end up making more money than he would if he stuck with boxing.

Hearn believes that Fury no longer has the same desire for the sport of boxing now. With the easy money the 6’9″ Fury can make in the WWE in professional wrestling, he might prefer that to getting hit in the head by powerful heavyweights like WBC champion Deontay Wilder.

Hearn isn’t the only one that believe that Fury doesn’t have the same desire for the sport. Other people feel the same way about him, and they have doubts whether he’ll continue his career for much longer. With the scare that Fury got in his fight with Wilder last December, it makes sense for him to be considering moving into another profession.

“Listen, Tyson’s on a roll right now, he’s going for it,” Hearn told IFL TV. “He’s got a Christmas single coming out, he’s doing WWE – his head’s gone completely but he’s absolutely living life, so good luck to him. I think he’s packing up boxing. I really think that he’s looking at it and thinking, ‘I’ve made a nice few quid over the last few fights,

“I’m enjoying life. I just think he’s looking at this other world and going, ‘Do you know what, this is a lot more fun than getting my head punched and going into camp. I’m sure he’ll fight again but I don’t think he’s got the hunger. It’s hard because all of a sudden he’s made some great money.

The way that Fury struggled recently in his win over Otto Wallin on September 14, it’s painfully obvious that he’s not going to stay unbeaten for much longer. Fury was outworked by the younger 28-year-old Swedish heavyweight Wallin, and staggered in the 12th. In the third round, Fury sustained a bad cut over his right eye that arguably should have resulted in the fight being stopped.

Fury would have lost the fight had the match been stopped. Instead, Fury fought the whole 12 rounds with the cut. Afterwards, the cut required 47 stitches to close. That could have been a loss for Fury, and perhaps should have been. The cut is still healing, and there’s question marks whether the eye will hold together for his February rematch with Wilder.

Fury’s future in the sport is already in doubt

If Wilder destroys Fury in the rematch, his career is going to be on shaky legs, and he would be facing the same retirement questions he is now. The combination of the bad cut that Fury sustained and the unknowns about whether he can still take a good shot without getting hurt make his future in boxing uncertain.

Fury’s whole game is built on trickery, and he lacks the power to stand fight the bigger punchers in the division. Fury should have arguably been knocked out in the 12th round against Wilder if the referee had waived it off once he saw that Tyson was unconscious.

“He’s prancing around LA, getting in the ring, doing all this cringey stuff with the WWE guys, and everybody is loving it,” said Hearn. “I think it’s brilliant for him. He’s got the Robbie Williams thing. Good luck to him. I don’t believe he’s got the same hunger that he had certainly pre-Klitschko, and even pre-Wilder.

It’s likely that Fury will still face Wilder in their rematch in early 2020, but it’s probably not going to go well for him. If Fury gets destroyed by Wilder, it’s predictable that he’ll retire from boxing.