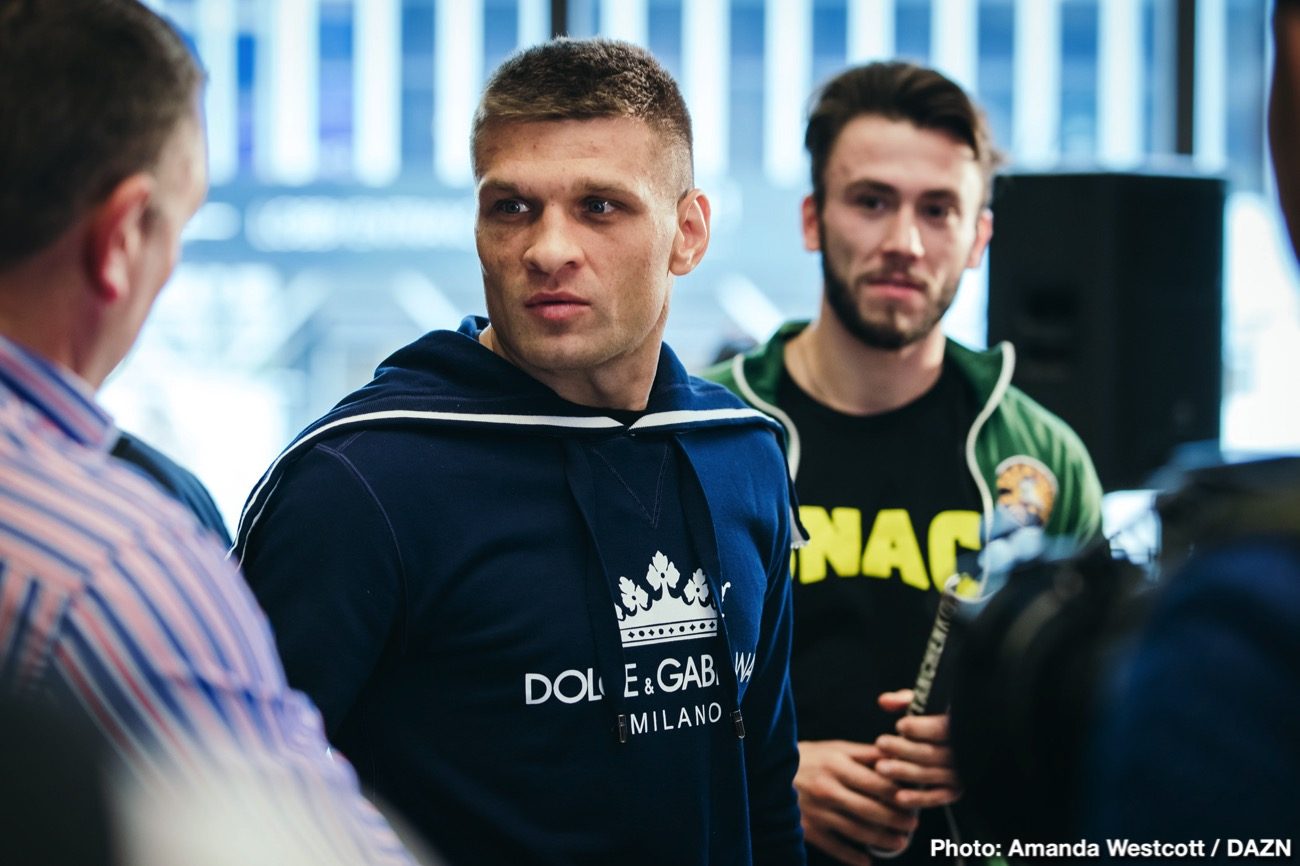 By Barry Holbrook: Billy Joe Saunders says Gennady Golovkin is going to age physically from his fight against Sergiy Derevyanchenko this Saturday night. Saunders thinks this is going to be a war between Golovkin (39-1-1, 35 KOs) and 2008 Olympic bronze medalist Derevyanchenko (13-1, 10 KOs) on DAZN at Madison Square Garden in New York.

Golovkin-Derevyanchenko will be fighting for the vacant IBF middleweight title.

This could be a very hard fight for Golovkin. A lot of boxing fans, who are unfamiliar with Derevyachenko, are predicting an easy knockout win for GGG. This could turn out to be anything but easy for Golovkin, as Dereyanchenko is an excellent fighter on the inside. A loss for Golovkin isn’t out of the question.

Saunders predicts Golovkin vs. Derevyanchenko will be a slug-fest

“This is a fight for Golovkin which will take the edge off him. It will put a bit more age on him,” said Saunders to skysports.com about Golovkin’s fight with Derevyanchenko. “It will be a scrap. This will be crash, bang, wallop. It will be over quickly. Whoever the winner, it will be a war.

“I’d fight Golovkin at whatever weight he wants. I could show people how easily I could beat him.”

If this is the Derevyanchenko that we saw in his fight against Daniel Jacobs last October, then Golovkin is going to take a lot of punishment against him. Derevyanchenko fought Jacobs on the inside the entire fight, and got the better of him.

Although the decision didn’t go Derevyanchenko’s way, he fought like a world champion. There was very little to separate the two fighters at the end of the clash. The difference in the fight was the 1st round knockdown that Jacobs scored over Derevyanchenko.

Billy Joe wants Golovkin to fight him at 168

Saunders (28-0, 13 KOs) is hoping that Golovkin will move up to 168 in his next fight and challenge him for his WBO super middleweight title. The chances are slim and none. Golovkin wants to fight popular guys, and Saunders doesn’t fit that description. Even in Saunders’ own country in the UK, he’s not popular.

This could be Derevyanchenko’s last chance

Golovkin is facing a fighter that is in a must win situation in 33-year-old Derevyanchenko. He lost to Daniel Jacobs by 12 round decision last year in an attempt to capture the IBF middleweight title. The International Boxing Federation gave Derevyanchenko a break by letting him fight in an IBF 160-lb title eliminator against Jack Culcay last April. The IBF could have dropped Derevyanchenko down to the bottom of their rankings after his loss to Jacobs.

When Shawn Porter lost to Kell Brook in 2014, the IBF dropped Porter all the way to the bottom of their rankings. There was no title eliminator for Porter in his next fight. Derevyanchenko is being given a golden opportunity to win the IBF middleweight title. But if he fails to do it this time against GGG, then it’s likely Derevyanchenko will be dropped far down in the IBF’s rankings the same way Porter was in 2014.

Join me at the @ManhattanCenter’s Grand Ballroom on the 7th floor this Friday at 3 for the official #GGGDerevyanchenko weigh-in! 💪 We’re giving away free tickets (including two ringside seats 🥊) to fans showing the most #TeamGGG spirit. Don’t miss it – see you there. 💥 pic.twitter.com/YWiAEYtwiG