By Scott Gilfoid: Many fans are furious with the decision last Saturday night with Josh Taylor being given a HIGHLY questionable 12 round majority decision over WBA light welterweight champion Regis Prograis in the WBSS tourney final in London, England.

I think I speak for a lot of boxing fans in saying that Taylor NEEDS to do the right thing and give Prograis a rematch straightaway. His win last Saturday was tainted in the eyes of a lot of fans.

With Taylor’s right eye completely closed, his face battered & bruised, he looked very much like the loser of the fight. In contrast, Prograis’ face was relatively unmarked other than a few scratches. His appearance was that of someone that had gone on a nice light run.

Prograis fought well enough to win the fight by two rounds, but instead he ended up on the losing end of a questionable decision. I hate to say it, but the highly talented Prograis will probably never get a rematch. What a disappointment.

Prograis put on a valiant effort in coming back in the second half of the fight, and he has nothing to show for his efforts. He had Taylor on the run. Josh was in full retreat move from rounds 8 through 12, taking withering fire as he ran from the battlefield.

Obviously there needs to be a rematch between Prograis and Taylor so that the controversy can be cleared up. It doesn’t look like that’s going to happen though. Taylor is already talking about wanting to face WBC & WBO light welterweight champion Jose Carlos Ramirez (25-0, 17 KOs) next in a fight for the undisputed championship at 140. Josh says he wants to do that, and he could even move up to 147. That means Prograis WON’T be getting a rematch. It’s pretty sad, isn’t it?

Prograis should have known what he was getting himself into when he agreed to fight Taylor in his backyard in the UK. Regis saw it as a good thing that he would be the visiting fighter, and he never entertained the idea that it could result in him being on the receiving end of a controversial decision. Now he knows.

The fans felt that the fight should have been scored a win for Prograis (24-1, 20 KOs) or a 12 round draw. They didn’t see it as a win for Taylor (16-0, 12 KOs), who fell apart physically in the second half of the fight. The pressure that the highly talented Prograis put on Taylor wore him down, and he was forced to run.

The judges saw a different fight

Prograis fought well enough to win 3 of the first 6 rounds. Down the stretch in the second half of the fight, Taylor had nothing left appeared to lose rounds 9, 10, 11 and 12. If you do the match, that means Prograis should have won the fight 7 rounds to 5.

Unbeaten middleweight talent Austin ‘Ammo’ Williams was just one of many shocked people in the audience last Saturday night when the judges’ scores were announced for the Prograis-Taylor fight. Williams was especially disgusted with the 117-112 score

“I was thinking a draw because the rounds were so close,” said Ammo Williams to Fighthype about the scoring for the Prograis vs. Taylor fight. “I think Regis’ activity. He was landing jabs all throughout that entire fight. I think he definitely outpointed Taylor. I think Taylor got some good shots off here and there in the first few rounds, but I DEFINITELY think Regis won that fight. It’s boxing, you never know. That’s a terrible score,” said Ammo Williams about the 117-112 score one of the judges had for Taylor.

“Everybody here knows that’s a terrible score, and you heard the confusion in the crowd when you heard 117. I think nobody wanted it a draw because everybody is on somebody’s side, but at least we knew that was maybe true. You know what I’m saying? 117, that’s  disgusting score. I definitely want to see a rematch, but I don’t think Josh Taylor is going to want to see a rematch. I think they’re going to get as far away from Regis as they can get. It was a tough fight. I’m speechless right now. I’m really…in the worst case scenario, I thought it would be a draw.

It’s hard to disagree with Ammo Williams in what he’s saying about the Prograis-Taylor results. Prograis landed the harder shots throughout the 12 round bout, and he had Taylor on a full scale retreat in the second half of the fight. 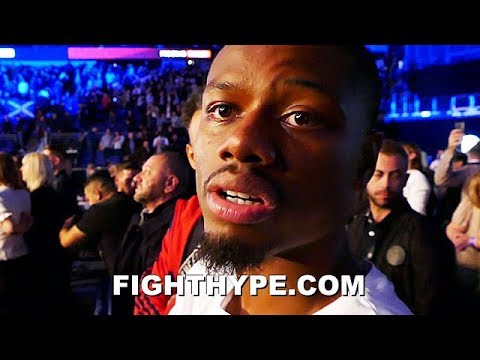