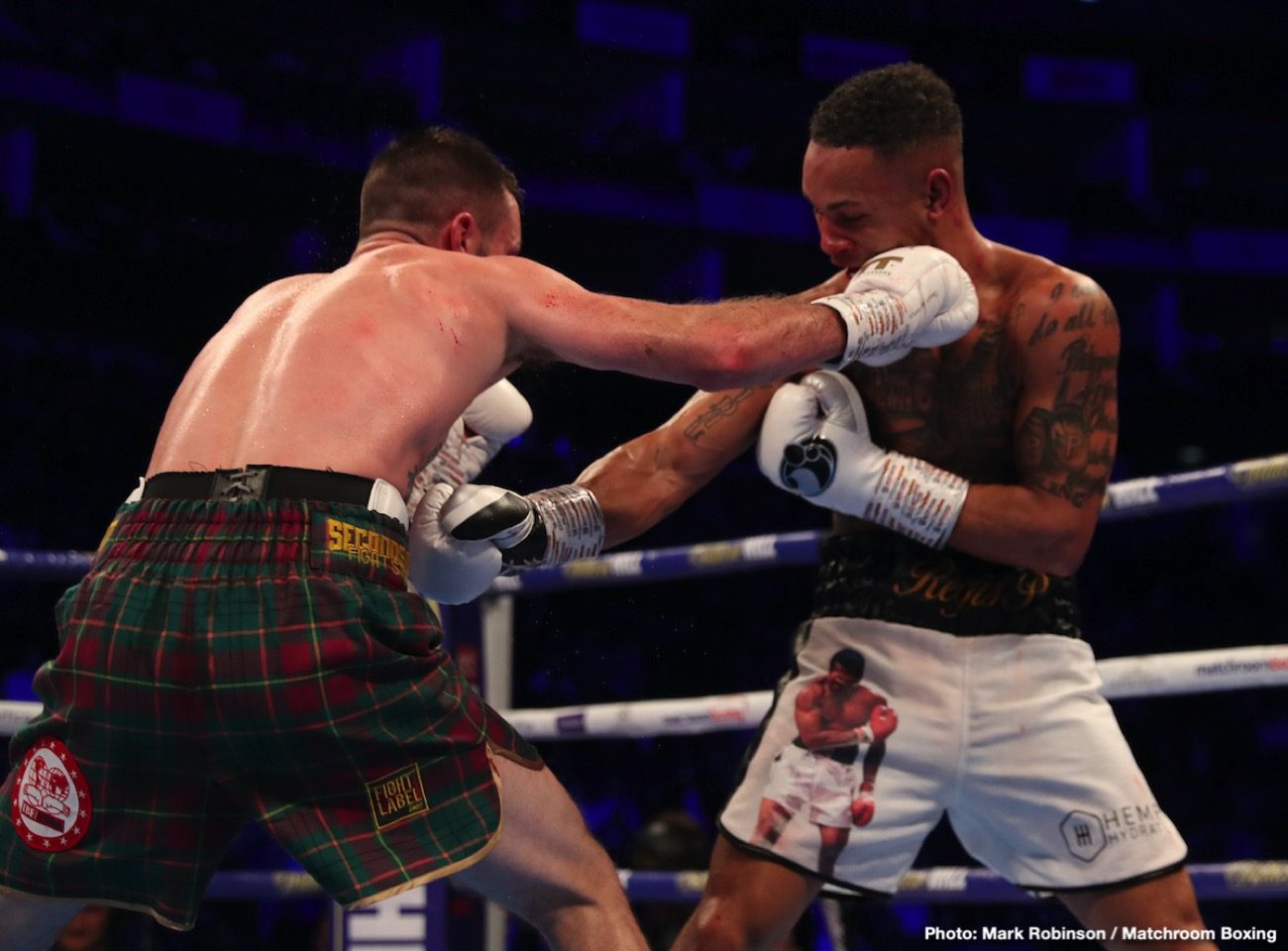 By Mark Eisner: Regis Prograis and Josh Taylor showed good sportsmanship in posing pictures and complimentary things about one another following their fierce 12 round battle last Saturday night in London. IBF light welterweight champion Taylor (16-0, 12 KOs) edged WBA champ Prograis (24-1, 20 KOs) by a majority 12 round decision to win to win the World Boxing Super Series tournament. Taylor captured the Muhammad Ali despite his right eye being closed in the last two rounds.

On Sunday, Taylor and Prograis made it clear that there’s no bad blood between them. Taylor hopes for the best for Prograis in coming back from the loss. For his part, Prograis says he’d like to have a rematch with Taylor in the future. As competitive as their fight is, there will be a lot of interest from boxing fans in seeing a second fight between them. However, that’ll depend on how well Prograis bounces back from the loss.

Taylor exposed some flaws in Prograis’ game that other fighters will be able to take advantage. Specifically, Prograis was throwing too many single shots last night, and Taylor took advantage of that by outworking him with combinations. Prograis almost admired his work too often after throwing his single punches, and looked robotic. Taylor was the more fluid fighter of the two.

Two great champions friends after a great fight together last night. Who’s the w**k**r with the sunglasses on inside now 🤷🏻‍♂️😂😂. All the best to you in the future take care 👊🏼 @RPrograis pic.twitter.com/pLFR2bjH15

Taylor: I knew I could beat Prograis

“What a fight, all respect to Regis, he’s a great champion and was very strong,” said Taylor after the fight. “I knew I could get to him. I don’t think he expected me to be able to switch it up so easily. Let’s get it on. Ramirez, where you at? Let’s do it,” said Taylor in calling out WBC & WBO light welterweight champion Jose Carlos Ramirez after the fight.

In a surprise, the taller Taylor fought Prograis on the inside, and got the better of him. Few boxing fans would have been able to predict that Taylor would be superior to Prograis in close.

On the flip-side, Prograis fought better when he was on the outside. He didn’t make adjustments for that in his game until the last two rounds. It was obvious after the few rounds that Taylor was the better fighter on the inside, but Prograis stubbornly kept the action there.

“Honestly I really don’t care for being the big superstar. I hope Joshua does it for the British fighters because he is the face of the sport,” said Taylor when asked if he wants to takeover as the new star in British boxing. “I’m just interested in being the best that I can be. I don’t go seeking to be a superstar – the fame will come, but I’m not fussed for it.”

If Prograis is able to come back from this loss, a rematch between them in 2020 or 2021 would be of interest. We’ll have to see how this loss impacts Prograis’ career.