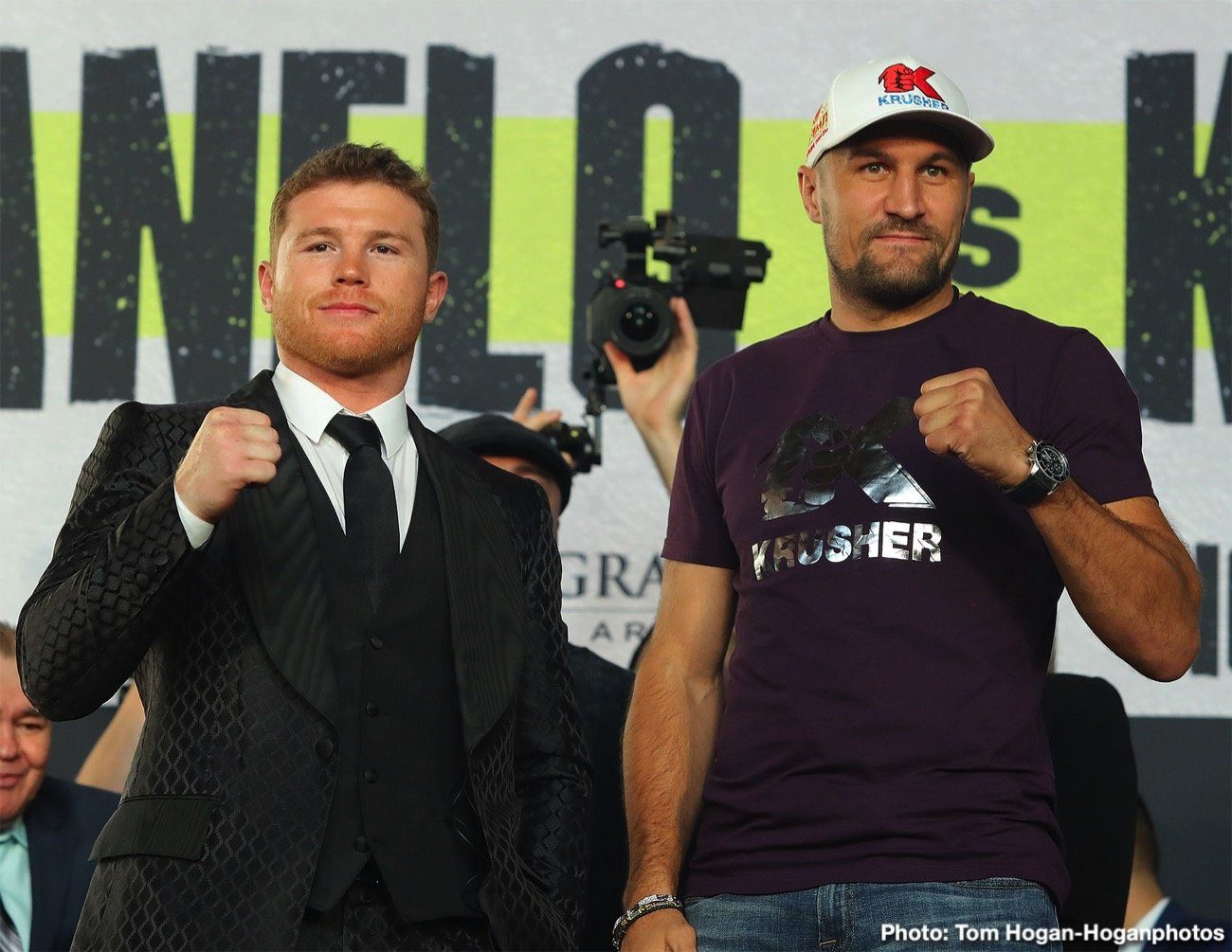 By Dan Ambrose: Max Kellerman is predicting a victory for Saul Canelo Alvarez when he faces WBO light heavyweight champion Sergey Kovalev in 2 weeks on November 2 at the MGM Grand Garden in Las Vegas, Nevada. Kellerman could have pie on his face if his prediction of victory for Canelo fails to materialize.

Kovalev vs. Canelo will be shown on DAZN on November 2.

Kovalev already seen as the loser against Canelo

A lot of boxing fans are prematurely calling it a win for Canelo already against the 36-year-old Kovalev (34-3-1, 29 KOs) without the fight having happened yet. The fans just feel that Kovalev is shot and can’t take a hard body shot based on his losses to Andre Ward and Eleider Alvarez. What boxing fans don’t realize is that Ward and Eleider are both much bigger fighters than Canelo, and they fought Kovalev during a bad period in his career.

Buddy McGirt has made major improvements in Kovalev’s game

Kovalev has gotten a lot better lately with his new coach Buddy McGirt, and he’s unbeaten since he took over. Although Kovalev had a close call in his last fight against Anthony Yarde, he stayed there and stopped him in the 11th round on August 24.

Kellerman is really impressed that Canelo is taking the challenge to fight a guy outside of his normal weight class. He sees this move by the Mexican star Canelo as another example of him not being scared to fight the best.

Canelo (52-1-2, 35 KOs) is moving up two weight classes to take on a champion that some boxing fans view as the weakest link among the champions at 175.

Kellerman says Canelo has “never been scared” to fight the best

A lot of fans would disagree with Kellerman’s assertion that “Canelo has never been scared.” It took him three years to finally face Golovkin. When GGG was 32, he wanted to fight Canelo, but the answer was no. Even after Canelo moved up to middleweight and won the WBC belt in a catch-weight fight against Miguel Cotto, he still wouldn’t fight GGG. Canelo vacated his WBC title when the World Boxing Council tried to force the fight. Golovkin didn’t get a fight against Canelo until he was 35-years-old, and coming off back-to-back poor performances against Daniel Jacobs and Kell Brook.

Canelo needs to prove he can beat Kovalev

Kellerman is right in saying, ‘let’s see him [Canelo] do it” in beating Kovalev. It’s admirable that Canelo originally started his boxing career at 147, but he’s always been a guy whose been bigger than his opponents during his career. It’s not as if Canelo has been fighting guys bigger than him.

When he fought Gennady Golovkin at middleweight, they were at the same weight roughly, and many saw him get a gift draw in the first fight. The second fight between them looked like a draw, but the judges gave Canelo a victory. Now he says Golovkin isn’t a challenge for him. That looks to some fans like Canelo is scared of GGG after dodging a bullet in their second fight.

“The reason why I, you guys and others started to clamor for GGG and Canelo is not because Canelo was the natural opponent for him. There were guys in GGG’s weight class,” said Kellerman. “It’s because we looked at him and said, ‘What superstar fighter would get in with GGG, who’s not bigger like Andre Ward,’ because GGG wouldn’t get in with Andre Ward, right? But who in the 160 and 168-pounders and below would get in [with Golovkin]. Canelo will do it.

“We all knew Canelo would do it, because Canelo is a real fighter. And not only did he do it, I thought Canelo lost the first fight [with Golovkin]. But when GGG was getting on him about ‘why don’t you fight Mexican style?’ In the meantime, GGG didn’t really press the action and put his head in his chest in the first fight, because of Canelo’s sharp counter-punching off the ropes, right? In the rematch, GGG is fighting on the outside, and little Canelo Alvarez is chasing him,” said Kellerman.

Why is Canelo fighting guys after they get old?

Canelo did finally fight Golovkin, but it’s not as if he did it right away. When you wait until a fighter turns 35 before fighting them, where’s the courage in that? It looks like Canelo waited GGG until he got old before fighting him. Now we’re about to see Canelo fighting Sergey Kovalev after he got old at 36. Where was Canelo five years ago when Kovalev was 31, and viewed as the best fighter in the 175-lb division by many boxing fans.

“Canelo is a 100% fighter. Everyone goes through a stage in their career where they’re being built, and you want to promote them the right way, but I never doubt Canelo would fight him,” said Kellerman in pouring compliments over the head of Canelo by the bucketful.

Kellerman didn’t doubt that Canelo would fight GGG, but a lot of boxing fans did. It’s disappointing that it took Canelo 3 years to finally face him, and then another year before fighting him in a rematch. Now it’s a year later, and Canelo still hasn’t fought Golovkin in the trilogy match that DAZN and the fans want.