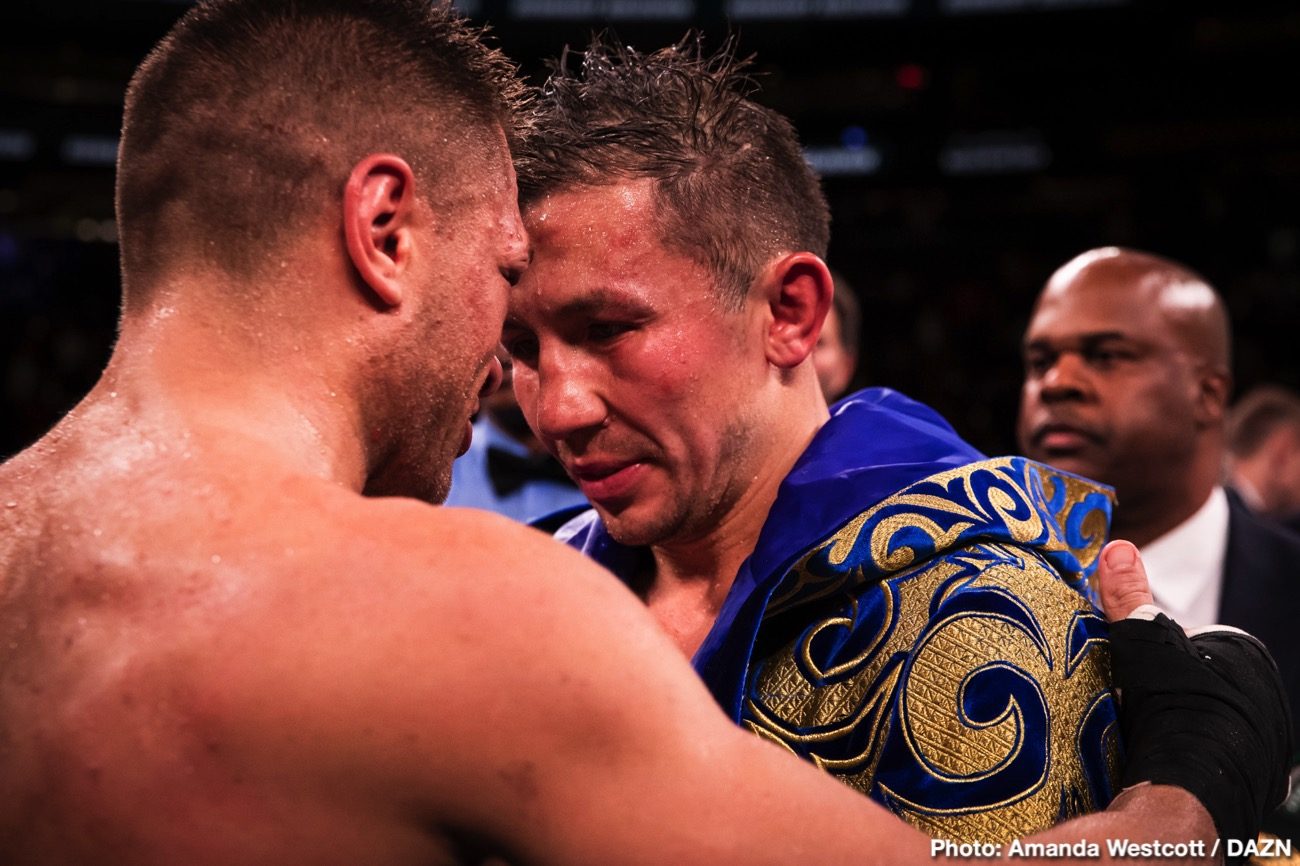 By Sean Jones: In a shocking revelation, Matchroom boss Eddie Hearn says Gennadiy Golovkin was BADLY sick going into his fight last Saturday night against Sergiy ‘The Technician’ Derevyanchenko at Madison Square Garden in New York.  From the 1st round, GGG looked unwell with a faded appearance.

You can argue that the fight could have gone either way, but it’s difficult to see GGG losing the fight. He knocked Derevyanchenko down in round 1, and controlled most of the first six rounds. It appeared that Golovkin had won 4 out of the first 6 rounds. He then came on strong in the championship rounds after Derevyanchenko faded and pulled out the decision.

Golovkin fought the fight of his life

For fans unfamiliar with Derevyanchenko, they’ll say he fought the fight of his life. But if you saw how he fought against Daniel Jacobs, Tureano Johnson and Jack Culcay you would view this as standard for Derevyanchenko. He ALWAYS fights all out, and is involved in exciting fights. Golovkin is the one that fought the fight of his life, as he was sick and not close to 100% that he needed to be.

Hearn says GGG had been sick all week

“The knockdown was huge and the last two rounds were huge in my opinion,” said Hearn to Fighthub. “Derevyanchenko was unbelievable. He followed his game plan to absolute perfection, and to do it with a cut was unbelievable. It was one of the best fights I’ve seen.

“He’s been tipped beyond the weather all week. Just like a virus. I wouldn’t classify it as that,” said Hearn when asked if GGG had the flu. “It wasn’t quite as serious. Somebody else told me out of our camp. It was confirmed to me during the 1st round of the fight actually.

“I felt like why shouldn’t I tell you that, and you could see that tonight at times. You don’t like to say that, because you discredit Derevyanchenko, who was brilliant, who pushed him all the way and made it tight. I know Gennady showed a lot of toughness in the Canelo fights, but he showed a huge amount of character tonight, because he came back and won the championship rounds tonight when it looked like it might be slipping away.

If Golovkin was as sick as Hearn says, he could have pulled out of the fight, but he chose to stay in there. That shows heart for a fighter to stick out even when they’re feeling under the weather.

Golovkin TIRED from round 5 from Derevyanchenko’s fast pace

“I think he won 2 out of the last 3 rounds on the cards,” said Hearn. “He came back in a brilliant fight. The truth is he won a very close fight against a good fighter, who boxed the fight of his life Derevyanchenko. It’s not going to be easy at that part of your life when you want fighters that are frustratingly slipping away from you. What I do know is this week was a struggle for him.

“He had to show a lot of heart tonight, because he was tired in that fight. You could tell that even from the 5th and 6th round. The pace was frantic. Derevyanchenko, the cut kind of helped him, because he felt the fight could be stopped at any moment.

“So all of a sudden he’s throwing the kitchen sink at it, and he’s having success that spurred him on. After the 1st round, I thought this is going to be an early night,” said Hearn.

Gennady will make decision in picking next opponent

“The 1st round knockdown kind of woke him [Derevyanchenko] up. It was a flash knockdown. I thought Derevyanchenko boxed the perfect fight. There’s one person that decides the future for Gennady, and that’s Gennady. I think he’s going to have a mandatory at some point that needs to be designated. His hand is badly bruised. I think February was the original plan, but it was a tough fight.

“His [Golovkin] hand is damaged, and maybe he won’t be ready for February. The rematch would be a huge fight. Everything depends on Gennady. I remember in the 5th and 6th rounds when it started to swing a little [towards Derevyanchenko]. I thought Joshua-Ruiz, not again. It was the same level of underdog that produced something special at a place like this. That’s what happens in the Garden,” said Hearn.

It’s unreasonable to expect Golovkin to return to the ring by February. After this type of fight, he’s going to need a long rest to heal up, and recover from the punishment he took from Derevyanchenko. When Golovkin does come back, he’ll likely need to defend his newly won International Boxing Federation middleweight title against his designated mandatory. The IBF still hasn’t named the mandatory, but it’s expected to be Kamil Szeremeta.

It’s standard for the sanctioning bodies to order a mandatory defense for a champion after they win a vacant title like we saw with the GGG-Derevyanchenko fight. Golovkin isn’t going to vacate or allow the IBF to strip him of his hard-earned title.

So there’s a good chance that Golovkin’s next fight will be against Szeremeta in the first quarter of 2020. This could change if Saul Canelo Alvarez shows interest in wanting to fight Gennady in a unification fight, but right now that’s not expected to happen.

Thank you to all of my fans who have been there for me and always showed support to #teamGGG. Stronger together 💪🏻 pic.twitter.com/WCECSqaSf3