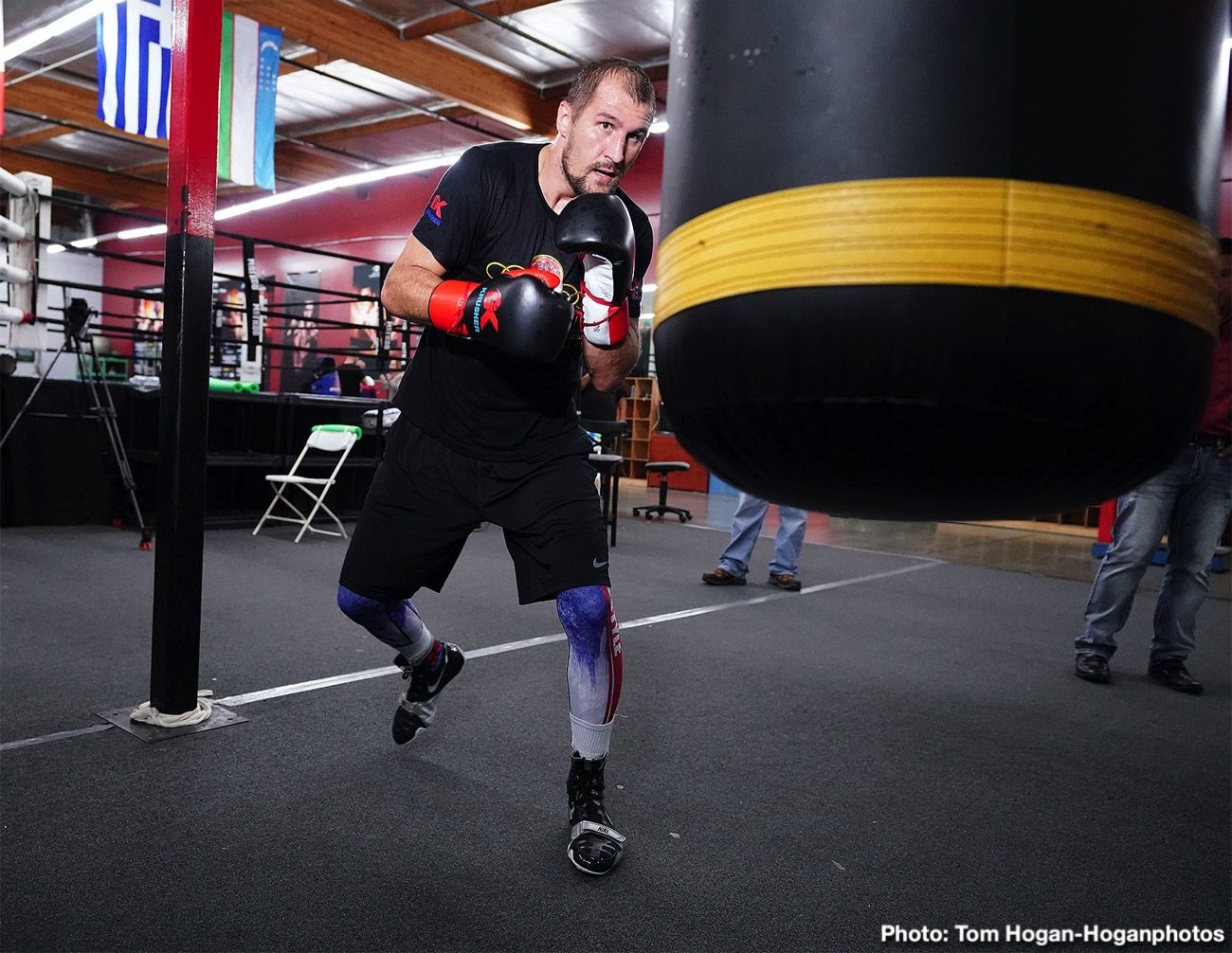 By Sean Jones: Trainer Buddy McGirt is hinting that his fighter WBO light heavyweight champion Sergey ‘Krusher’ Kovalev (34-3-1, 29 KOs) will be targeting Saul Canelo Alvarez’s body when the two of them face each other on November 2 at the MGM Grand in Las Vegas, Nevada.

Up until now, the belief the boxing experts have held is Canelo (52-1-2, 35 KOs) will be looking to stop the 36-year-old Kovalev with body shots. Kovalev has shown a weakness in taking body shots in his fights with Andre Ward, Eleider Alvarez and Anthony Yarde.

Beterbiev struggled in the first three-quarters of the fight with Gvozdyk. Starting in the 9th, Beterbiev started going to the body of Gvozdyk, and he hurt him. In the 10th, Beterbiev stopped Gvozyk. The performance by Beterbiev may have planted some ideas into the head of McGirt and Kovalev, making them believe they can do the same thing to Canelo.

If Kovalev goes to the body of Canelo with the hardest shots he can throw, he’ll do some damage. Here’s the thing: Kovalev has to target Canelo’s body from the first round. If he waits too long, Canelo might take him out with a body shot.

What happens to Canelo when Kovalev hits him to the body asks McGirt?

Canelo is just as susceptible to getting hurt to the body as Kovalev.  Canelo was hurt by body shots from Austin Trout and Floyd Mayweather Jr. Trout really hurt Canelo with a hard body shot in the 7th in their fight in April 2013.

Canelo was so hurt by the body shot from Trout that he spent the last six rounds with his back against the ropes. He clearly didn’t want Trout to hit him to the body again. Trout was arguably robbed of a victory in that fight, as he jabbed Canelo from long range and dominated the entire second half of the fight.

What’s interesting is that Canelo’s opponents since the Trout fight failed to identify his weakness when taking body shots. Liam Smith briefly threw to Canelo’s body in their fight in September 2016, but he gassed out and was stopped.

McGirt: If Kovalev loses a close fight to Canelo, he’ll get a rematch

“I don’t even think about it,” said McGirt said to Fino Boxing about whether Kovalev needs a knockout to win against Canelo in Las Vegas. “If it’s that close and the judges give it to him [Canelo], then we’re going to have a rematch. Then you’re going to have it on neutral ground. Other than that, I don’t even think about that. The ultimate goal is to go in there and do what we have to do. If the judges see something else, then that’s on them.

“They got to deal with the public. No, because he’s challenging himself, and when a man challenges himself, win, lose or draw, they’re going to be proud of themselves, because they’re going to say, ‘I did it. Not, ‘I would have, could have or should have.’ So when you challenge yourself to something, no matter if you overcome it or not, you can always say, ‘I tried it, and no one stopped me and I went for it,'” said McGirt.

McGirt might be a little naive about his belief that Kovalev will get a rematch if he loses a close and/or controversial decision to Canelo. History has shown us that Canelo doesn’t always give rematches after winning controversial decisions. Look at what happened with Erislandy Lara and Trout after their questionable losses to Canelo. Neither guy got a rematch. Some boxing fans felt that Canelo’s win over Miguel Cotto was controversial as well. Then you have Gennadiy Golovkin, who was involved in TWO controversial fights with Canelo. Despite many boxing fans believing that GGG won both contests, he still hasn’t gotten a trilogy match.

It would be better for McGirt to let Kovalev know that if he loses a close decision to Canelo, he probably WON’T get a rematch.