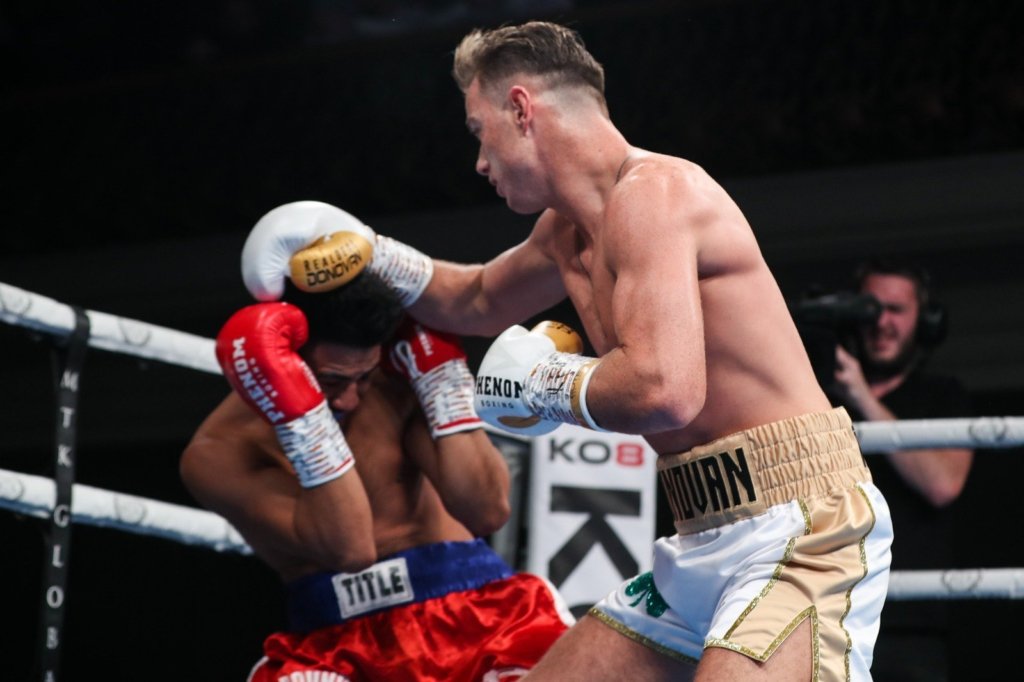 Former world silver medallist and 13 times Irish amateur champion Paddy ‘The Real’ Donovan made an emphatic statement on his pro debut at the Ulster Hall, Belfast on Friday evening.

Donovan confidently started round one of the paid ranks using an effective right jab to find his range and walk down his Mexican opponent Arturo Lopez. When the opportunity came the rangy Irish southpaw unleashed a devastating left hand sending the Mexican visitor stumbling to the canvas and being counted out by the referee at an official time of 1.16 in round one.

The affable 20 year old raised his arm and smiled broadly as the crowd erupted and applauded the clinical knockout of the young star in the making.

Donovan elated with his win, spoke to the media at the ring apron ‘I am delighted to win my pro debut with a good performance, I had a good camp with Andy and I am learning every day in the gym.’

‘This is the first step in a long journey and apprenticeship to learn my craft and become a world champion by the grace of God someday’.

‘ I am very honoured to be a Top Rank fighter, Bob Arum and his team have a 50 year track record of building fighters and mapping out a career path from a fighter’s pro debut to being a world champion, I am looking forward to that journey with them.’

Andy Lee in his new role as manager and trainer was very pleased with his fighter’s performance, ‘ Paddy is a real talent and has the potential to go all the way, he can box and he can bang, his knockout was punch perfect. He is young and hungry to learn and develop his skills and that makes my job easier.’

Paddy Donovan’s next outing will be in Glasgow, Scotland on 16 November.

Rabchenko returns with a win – sets sights on Tim Tszyu

Former European Super Welterweight champion Sergey Rabchenko made a successful return to the ring on Saturday and has targeted world rated Tim Tszyu, son of the legendary Kostya Tszyu. Rabchenko won a comfortable points decision over journeyman Aliaksandr Dzemka over 6 rounds in Minsk, Belarus and is no stranger to the Land Down Under. In 2014 he lost a very contentious split decision to Anthony Mundine, in a fight many thought he did enough to get his hand raised.

“I feel I have unfinished business in Australia. It is a beautiful place, with great people, but I want to knock out one of their up and coming talents in Tim Tszyu,” said Rabchenko. “I look at Tim Tszyu and think he is talented, not as good as his father obviously, but it is someone I can beat and take his place in the world ratings,” he continued. Currently the man nicknamed “Tszyu2” is rated 8th by the IBF and 12th by the WBO.

“Sergey boxed well on the weekend, the idea was to get rounds in and shake off any rust since his last fight in June,” said his manager Philippe Fondu. “As a team we have set our sights on Tim Tszyu. The Australian boxing public is familiar with Sergey after his great fight there with Mundine, so we believe it’s probably a fight that can be made quite easily,” Fondu continued.

“I see Tszyu has a fight against another Australian scheduled. If he wants a real challenge after that, all he has to do is get in contact with my team,” stated Rabchenko. “My record is now 30 wins and 5 losses and I plan on making Tszyu win number 31”.

Hartford, CT (October 12, 2019) – Twenty-four hours after learning he’d been inducted into the Connecticut Boxing Hall of Fame, “Bad” Chad Dawson turned back the clock with another Hall-worthy performance Friday at the Connecticut Convention Center in downtown Hartford.

After shaking off the rust in his comeback fight in June, the former two-time world champion Dawson looked much sharper Friday against the always-dangerous Grachev, using his exceptional footwork and defense, coupled with a stiff jab, to keep the hard-charging Russian at bay. Grachev promised to dictate the pace, suggesting Dawson doesn’t handle pressure well, but the New Haven, CT, veteran masterfully controlled the fight from the opening bell, save for a brief scare in the sixth when Grachev landed a rare clean shot and backed the champ against the ropes.

Afterward, Dawson issued a challenge to the world’s top-rated 175-pounders, citing, “I feel like I’m 25 again.” On Thursday, the Connecticut Boxing Hall of Fame announced Dawson as one six honorees in its 2019 class, which also includes Arturo Gatti and Delvin Rodriguez.

Hartford lightweight Sharad Collier (4-0-1, 3 KOs) rallied in the opening bout of the telecast to earn a third-round knockout win over hard-hitting Glenn Mitchell (3-4) of Steubenville, OH. Collier hit the canvas in the opening round courtesy of a stiff, left jab by Mitchell, but dusted himself off and landed a series of looping, overhand shots that floored Mitchell right before the bell. As Collier became more patient in the later rounds, he continued to rock the taller, lankier Mitchell with hard, overhand rights, eventually earning the stoppage at the 2:15 mark.

The preliminary card featured three evenly-matched bouts, starting with Springfield, MA, super welterweight Jalen Renaud (2-0) scoring a first-round knockdown en route to a unanimous decision win over Boston’s Maceo Crowder (2-3), who retured to the ring for the first time in six years. Crowder had his moments after the knockdown and landed some effective blows, but Renaud earned the decision, 40-35, across the board.

In what may have been the most entertaining bout on the card, New Britain, CT, super bantamweight Nathan Martinez (6-0) remained unbeaten with a hard-earned win over Texan Steve Garagarza (1-2-1), 40-36, 39-37, 39-37. The bout began at a frenetic pace with the two fighters exchanging shots within inches of one another for the first two rounds. The pace slowed a bit as fatigue set in, but the fight remained entertaining as Garagarza continued to press the action. Martinez’s defense was the story as the talented right-hander kept his guard up and landed effective counterpunches to pile up the point.

Decorated amateur and former 2017 New York Golden Gloves champion Jahvel Joseph (1-0) of the Bronx, NY, earned the win in his professional debut, overcoming a solid effort by Sao Paolo, Brazil vet Leandro Silva (1-3) by scored of 40-36, 39-37, 39-37, Silva, also a nine-time UFC vet in mixed martial arts, put constant pressure on Joseph, who eventually settled down and utilized his height advantage with an effective jab to set up his offensive attack.


« Usyk says Fury the toughest opponent, and Wilder the easiest