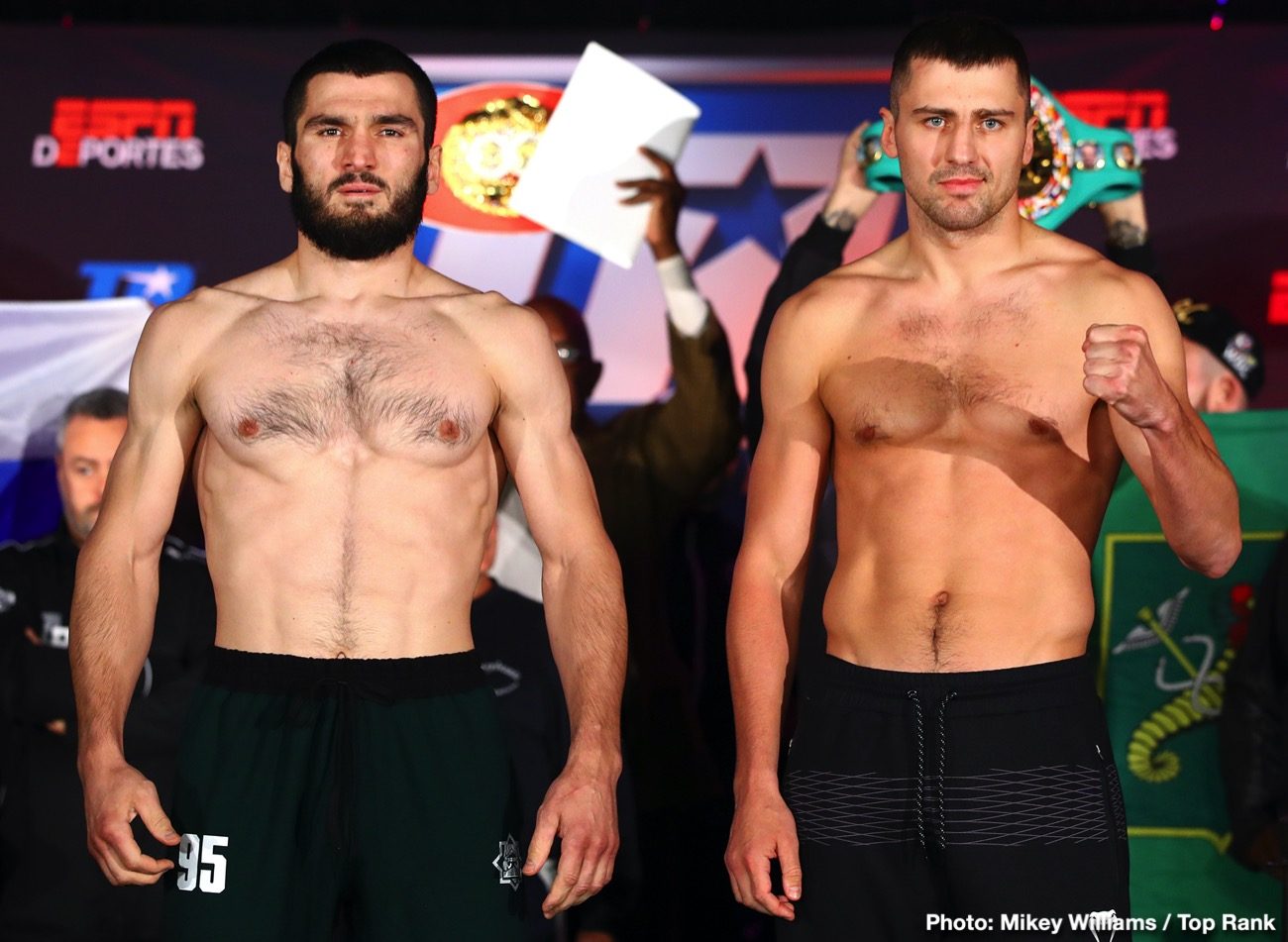 By Allan Fox: The odds-makers have this Friday night’s match-up between IBF light heavyweight champion Artur Beterbiev (14-0, 14 KOs) and WBC champ Oleksandr Gvozdyk (17-0, 14 KOs) as a 50-50 affair for their unification bout LIVE on ESPN and ESPN Deportes at the Liacouras Center, in Philadelphia. The two are both Olympians from Eastern Europe, and they can can punch.

It’s going to be interesting to see what game plan Gvozdyk’s trainer Teddy Atlas has for him in this fight. Beterbiev is too dangerous for Gvozdyk to try and exchange with early on. In their fight in the amateur ranks 10 years ago, Beterbiev broke Gvozdyk’s nose, and beat him.

That was a 4-round fight. On Saturday, Beterbiev will have 12 rounds to try and chop Gvozdyk down. If he breaks his prominent nose on Friday, the fight may need to be stopped.

A lot of boxing fans have gotten on board the Gvozdyk express following his 11th round knockout win over Adonis Stevenson last December. However, the fans don’t realize is Stevenson was 41-years-old at the time of the fight, and was coming off of a really hard fight against Badou Jack earlier in the year. Even then, Stevenson was STILL winning the fight going into the 11th round.

That was a far more interesting contest to watch than the Stevenson-Gvozdyk fight. Badou actually engaged Stevenson throughout the contest, and that made it interesting. In contrast, Gvozdyk moved around the ring for the first 10 rounds, trying to avoid Stevenson. In the 10th, Stevenson hurt Gvozdyk after clocking him with a left to the head.

The referee should have ruled it a knockdown due to Gvozdyk being held up by the ropes after he was tagged by Stevenson. Late in the same round, Gvozdyk came storming back, and hurt the tired 41-year-old Stevenson with a series of hard shots.

Atlas doesn’t want Gvozdyk to get greedy against Beterbiev

“I think this fight’s a little different than maybe some people envision it,” said Atlas about Beterbiev-Gvozdyk. “It’s not going to be exactly the same as the Stevenson fight because we have a guy where there’s going to have to be moments… put it this way, there’s going to have to be moments to take bigger bites with this guy. And that doesn’t mean getting sloppy or careless or greedy, but it means what it means.”

Gvozdyk will likely box Beterbiev through most of the early portion of the fight, and then go for the knockout in the second half of the contest. The problem with Atlas using the same cookie cutter game plan for all of Gvozdyk’s fights is it might not work for him against Beterbiev. What worked well for Gvozdyk against an over-the-hill Stevenson might not work well for him against Beterbiev, who is still a fresh fighter at 34. What we don’t want is for Gvozdyk to make it a boring fight by mimicking his friend Oleksandr Usyk’s finesse-oriented fighting style, and giving the match away.

Usyk beat Beterbiev by a controversial decision in the 2012 Olympics. Beterbiev landed the telling shots, but the judges were more impressed with the jabs from Usyk. If that had been a fight in the professional ranks, Usyk likely would have lost, because the judges count the harder blows over the jabs.

Gvozdyk will take chances at times against Beterbiev

“If there are moments to take bigger bites in this fight, we’re going to take them at whatever time that is,” said Atlas about Gvozdyk taking chances. “And if it’s early, it’s early. If it’s late, it’s late. If it’s middle, it’s middle.

Gvozdyk will need to be careful when he opens up with his offense, because he was hurt by Mehdi Amar and Tommy Karpency. Those guys found holes in Gvozdyk’s defense to hurt him with shots. If those were fringe level fighters, but they were still able to hurt Gvozdyk.

Numbers don’t lie: 2 days out, the current odds say this title unification showdown is about as 50/50 as it gets. 🤔#BeterbievNail | FRIDAY | ESPN pic.twitter.com/JA4xW9doet