Why do fans hate on Oscar De La Hoya so much? 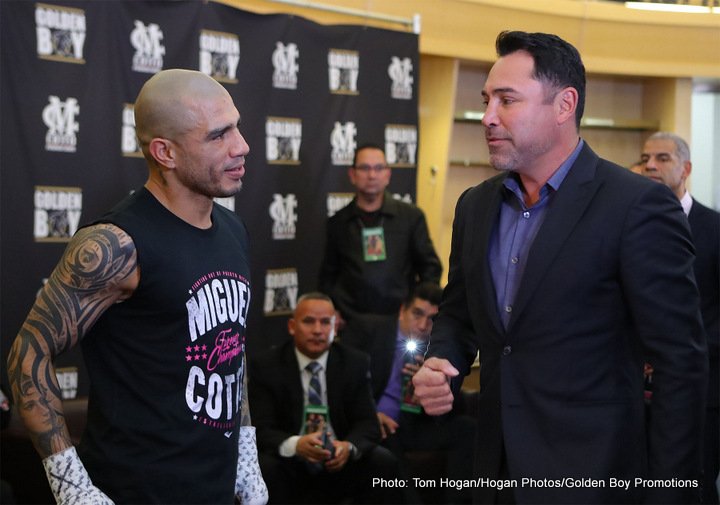 By Hector Gonzalez – I never understood the amount of hate towards Oscar De La Hoya. Within the politics of boxing, the shadiness of the sport, I always thought of Oscar as being a more bonafide figure in the sport than his counter parts. For instance, not only was he one of the best fighters of his era, in the 90’s at the lightweight division, but he was also the first fighter to successfully break away from his promoter (Bob Arum’s Top Rank Promotion) and develop his own business model as a promoter and building Golden Boy Promotions to becoming one of today’s biggest boxing promoting companies. That in itself sets him apart, in other words he’s the first professional boxer to not only be a successful prize fighter but also a successful boxing promoter. Other fighters have attempted to follow suit, Mayweather Promotions, Cotto Promotions, Pacquiao Promotions, Khan promotions, etc. all of them attempting to follow the path that Oscar original set out to do. None have yet to be successful at it. Oscar has set a blue print to success and whether people want to admit it or not, since Bob Arum’s Top Rank, Oscar has been the first to develop a new boxing super star in Canelo Alvarez.

I have my own thoughts as to the origin of the hate, I’ve outlined some talking points below, of which in the opinion of the writer might be some root causes, but more importantly also reasons that this writer believes are irrational and unfair.

Oscar vs. Chavez: Julio Cesar Chavez is one of the most beloved fighters in the history of boxing. He gave a face to the Mexican school of fighting, and bringing with him the Southwest style of boxing. I read somewhere that Chavez is responsible for making Las Vegas the Mecca of boxing. He truly was loved by the Mexican fans and true boxing fans in general. Oscar in the other hand is a Mexican American pretty boy who never truly gained the love and respect of Mexican native boxing fans. Oscar was always considered, not ‘Mexican enough’. I’ll be honest, I was a teenager when De La Hoya brutally destroyed Julio Cesar Chavez, a lot of fans were devastated including myself. Many fans haven’t recovered and still hate Oscar to this day.

Oscar vs Mayweather beef: Let’s be honest, it’s as if fans have to choose a side between who they like more. Some of these divisions, subconsciously are rooted in our own personal counter transference, whether it’s because of race, social status, or what have you. It’s as if boxing fans are split in two teams, on one side the Mayweather brand and on the other the Golden Boy brand. The reality of the matter is that the beef between Oscar and Mayweather is not just rooted in jealously based on boxing acclimates. Part of their beef, if not the main root cause, is that Floyd Mayweather Sr. had a fall out with his own son, and joined Oscar’s camp, and even referring to Oscar as his second son. Floyd Mayweather Sr. had even suggested that he would train Oscar for the DLH vs Mayweather fight. That’s right, fans get the illusion that this is somehow about race, or irrational dirt on one another.. It’s mostly about daddy issues.

Not Mexican enough: Mexican fighters are popular for two reason, 1.) They have fan friendly styles, 2.) they are relate-able to the working class, common folk. Erik Morales, for example, is very hard to not like, he had a fan friendly style but also relate-able, the same could be said about many of the Mexican greats. Oscar is not relate-able in the same way, he’s a pretty boy with a gold medal, really not his fault. Morales vs Paquiao 1, round 12.. Morales went south paw, risking being knockout by the Mexican Assassin..the drama was beautiful, a real Mexican warrior. But the reality is that he was never the same after that fight. DLH vs Trinidad, round 12, DLH backpedaled and most likely lost the round, a Mexican boxer doesn’t do that, Specially against a Puerto Rican fighter, and specially in the 12 round. Career wise, DLH left a longer impression in the world of boxing though. Oscar played it smarter, the key word is smarter, the boxing public doesn’t like that though.

PBC vs Golden Boy: To be clear, I’m just a boxing pundit, and like most of you reading this, I’m not a lawyer or boxing business insider, just a boxing aficionado. In 2003, the platform for a fighter to make his own destiny and join the promoting game was established by Oscar De La Hoya, he brought Shane Mosley and Bernard Hopkins with him. The era in which Golden Boy and Top Rank battled it out, from approximately 2004-2014, in the opinion of many people including myself was one of the best era’s in boxing. In this time period many great fights were made; to many to name, Corrales vs Castillo, all the Pacquiao fights, Morales vs Barrera, Johnny Gonzalez vs Israel Vasquez, all the Mayweather fights, IsraelVasquez vs Rafael Marquez, Marquez vs Baby Bull Diaz, Maidana vs Ortiz, Amir Khan vs Maidana, Ortiz vs Andre Berto, Maidana vs Adrien Broner, Salido vs Mikey Garcia, Salido vs Juanma, etc. I could keep going. A beautiful era of boxing. It’s not like that anymore.

The Golden Boy idea was to bring these fights to T.V. networks for free and get rid of the PPV platform. What ended up happening was that most of the fighters on the Golden Boy stable were taken from Golden Boy Promotions and signed to PBC by a breach of contract deal between then Golden Boy Promotions CEO Richard Schaefer and boxing adviser Al Haymon, who went on to establish Premiere Boxing Championship, taking almost all of Golden Boy’s fighters with them. Again, I’m no lawyer nor do I know the ins and outs of these entertainment investors paying money to these networks. The outcome though, is that great fights are not being made anymore.

Lastly, boxing is a sport filled with male bravado where there is little mercy for what hyper male masculinity perceives as weakness. Maybe Oscars vices took him to hell and back, embarrassed him for sure. But when all is said in done, here are three things that can’t be ignored. 1. Oscar did it all in boxing, Olympics, one of the best lightweights of all time, and successful promoter. 2. He’s done well for himself and his fighters, and 3. He would probably kick your a$$ if it came down to it.