Tyson Fury: I’m not stepping aside for Deontay Wilder 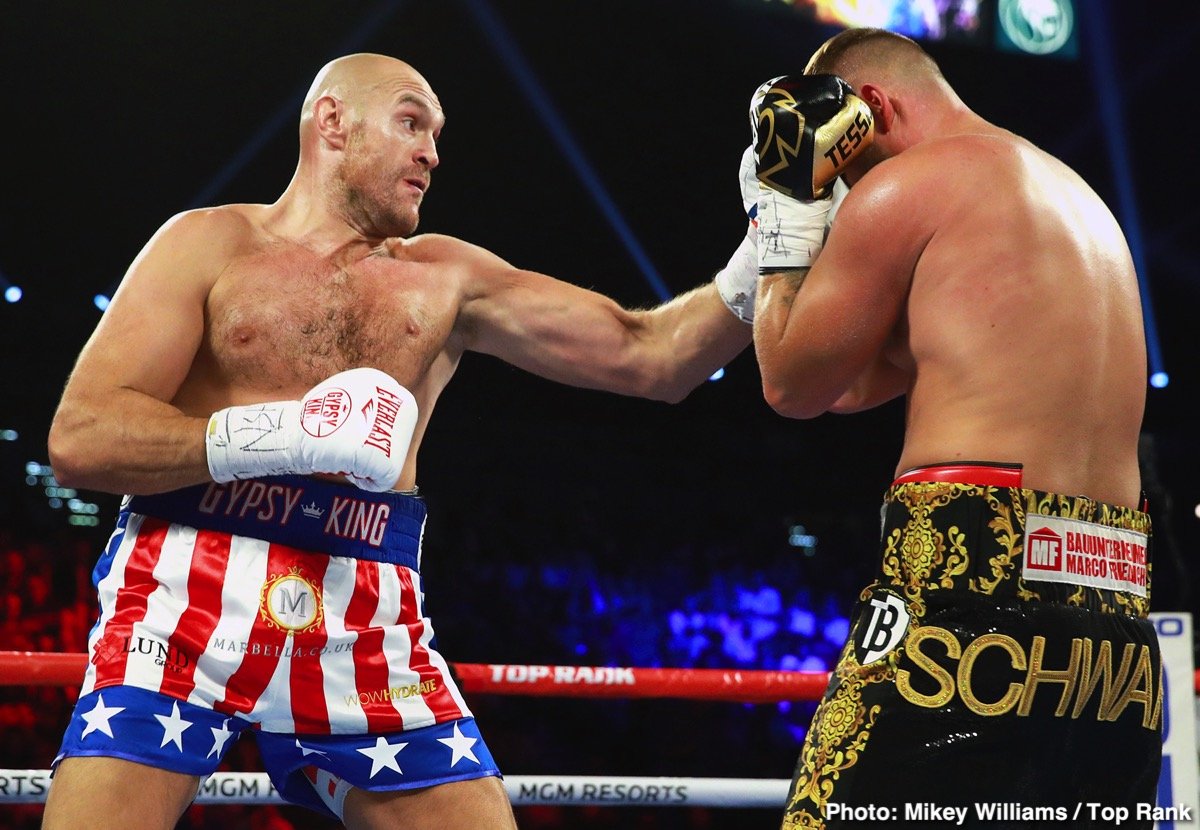 By Charles Brun: Tyson Fury says he won’t be stepping aside for Deontay Wilder so that he can fight for the undisputed heavyweight championship against the winner of the Anthony Joshua vs. Andy Ruiz Jr. fight on December 7th.

Top Rank promoter Bob Arum has already stated that he has a contract for Fury and Wilder to fight early next year on February 22.

Tyson Fury thinks Deontay Wilder is afraid of him

Fury, who holds the lineal heavyweight title, says WBC champion Wilder (41-0-1, 40 KOs) is “terrified” of fighting him again after having been held to a 12 round draw last December. Fury (28-0-1 20 KOs) maintains that if Wilder couldn’t beat him at that point with him losing 100 pounds, then he won’t defeat him in their rematch on February 22.

Earlier this week, Wilder told 78SPORTSTV, “Fury should step aside while I fight Joshua or Ruiz.” With Fury fighting lesser guys in Tom Schwarz and Otto Wallin instead of the elite heavyweights, Wilder gains nothing in fighting him now. The soft mismatches that Fury’s U.S based promoters Top Rank Boxing are setting him up with one after another is doing nothing to increase his popularity with hardcore fans. The true method of building up a fighter is to put them in with the best.

Top Rank isn’t doing that with Fury. They’re matching him slow, weak guys with high rankings, but precious little talent. Fury’s last opponent Schwarz was ranked #2 with the World Boxing Organization. He’d looked poor against the journeymen level opposition he’d fought during his career. Wallin is the same type of heavyweight as Schwarz.

The fact that Fury is no longer fighting the talented heavyweights in the division gives the impression that his promoters are trying to build his popularity using the backdoor method of putting him in with scrubs to make him look better than he actually is. That practice used to work in the past, but it’s not as effective as it once, because the fans that watch boxing now understand the sport. They know when a fighter is being matched against inept fodder, which you can argue is what Top Rank is doing with Fury.

Fury says stepping aside will be expensive

“I see all that stuff about how he wants me to step aside. Step aside to what?” said Fury to cbssports.com. “He’s terrified of the Gypsy King. He couldn’t beat the Gypsy King when I had three years out of the ring on alcohol and drugs. How the f— is he going to beat the Gypsy King now that I’ve been training for two years. Come on. [Stepping aside] depends on how much they want to pay me because I ain’t stepping aside. That’s not quite how it works and it’s very costly work,” said Fury.

Fury doesn’t call the shots with his match-making moves. So even though he’s open to stepping aside, Top Rank would likely not agree to this. They obviously feel that Fury can beat Wilder, and that’s why they want a rematch. This could prove to be a mistake on their part, as Wilder dropped Fury twice last December. He had Fury knocked out in the 12th, but the referee didn’t stop the fight. He gave a count while Fury was unconscious on the canvas.

You don’t see stuff like that any longer in big fights due to the potential risk involved. Fury beat the count, but he didn’t finish strong. Getting knocked down twice by Wilder in the championship rounds isn’t a good predictor of future success. Wilder landed the harder shots in every round of the fight, and he did more than enough to deserve a decision.

Top Rank could regret not accepting Wilder’s step aside offer

Fury’s spoiling style is similar to his cousin Hughie Fury. They’re both runners, and they basically slap, hold and spoil. Wilder might not relish the idea of having to chase Fury around the ring for 12 rounds again, and deal with the judges picking the winner. If Wilder does face Fury in February, Top Rank might be sorry they didn’t take the step aside option. Wilder plans on knocking Fury out this time to where he can’t beat the count.

If Fury loses to Wilder in the rematch, then he’ll have blown his chance for a big fight against Ruiz or Joshua. Wilder’s power, it just takes one punch for him to knockout his opponents. He carries his power late. So even Fury runs for 11 1/2 rounds like last time, Wilder could catch him in the 12th and stop him. It might be better for Top Rank to continue to take the safe route with Fury by matching him against more weak opponents until the Joshua-Ruiz winner looks his way. Fury is choosing to be stubborn by not wanting to agree to Wilder’s step aside offer.