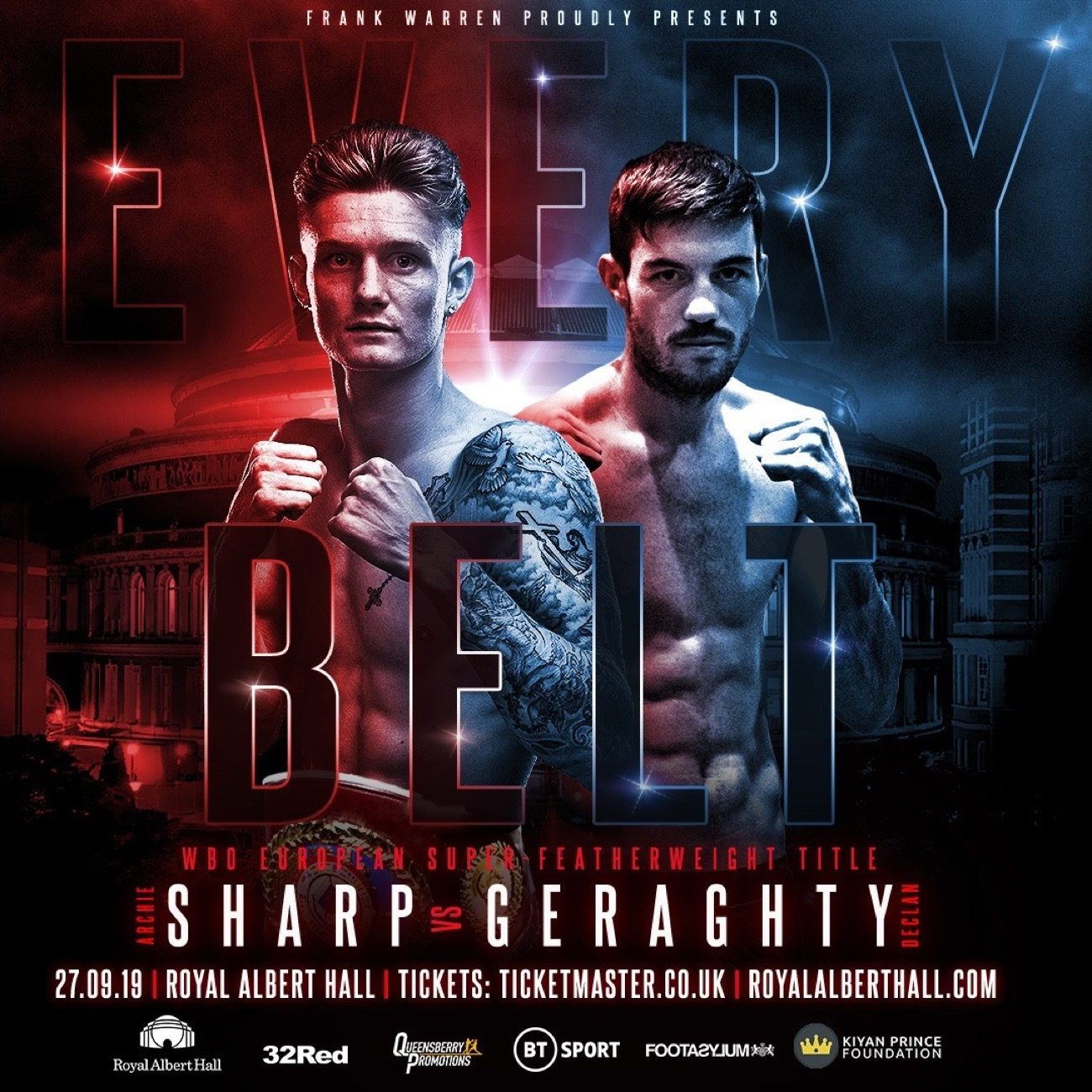 ARCHIE SHARP will defend his WBO European super featherweight title at the Royal Albert Hall on September 27 when he takes on the challenge from Declan ‘Pretty Boy’ Geraghty.

‘Sharpshooter’ Sharp, 16-0 (8KOs), makes a second defence of the title he won from Lyon Woodstock in October of last year, having seen off the threat of game Scot Jordan McCorry last time out in July.

The Dubliner Geraghty, 19-4 (4KOs), is accustomed to being involved in thrilling encounters and took part in an absorbing double-header with recent world title challenger Jono Carroll, with the second part taking place in June of last year with the IBF Intercontinental title at stake. Victory for Carroll after nine epic rounds saw him push on towards world title contention.

Sharp believes more drama could be in the offing when he fights for the first time at the stunning South Kensington venue.

“Declan Geraghty is a good fight, a very good fight,” said the 24-year-old. “He is always in exciting fights and always seems to bring a high level of skill to the ring.

“He is skilful but has ended up in a number of wars, which has probably been his downfall. He is a good, technical boxer and, because he has been chinned a couple of times, he might want to prove something now.

“If he sticks to his boxing it will be interesting because my last couple of fights have been against come-forward fighters. I like testing myself so it will be good to go in with a nice rangy southpaw. Why not?

“I am building now and every fight is benefiting me and moving me on towards those big fights. They have all been good fights – Woodstock, McCorry and now Geraghty is a good fight. They have all been hungry to win titles and if I keep beating these live opponents it will only serve to ready me for world level.”

Geraghty, 29, say he won’t get pulled into war by neat boxing Sharp, but insists: “It’s a really exciting fight and will be fan-friendly for everyone watching at the Royal Albert Hall and on BT Sport.

“I am going into his backyard and there is no pressure on me. I know how good his boxing ability is and I think it is down to who has the better boxing IQ.

“I like getting involved in a fight, but not this time because it is boxer v boxer.

“Archie is a bit similar to me and likes to keep it long and rangy, but I like getting dragged into a war every so often.

“His style will suit me and now is my time to deliver.”

GERAGHTY READY FOR A CHANGE OF LUCK

Sharp (16-0, 8KOs) makes the second defence of his title against the Dubliner at London’s Royal Albert Hall on Friday September 27, live on BT Sport.

He bounced back last month with a win following the McCullough defeat in May and says: “You can knock on the door so many times. Eventually it has to be answered and opened at some stage.

“It is not frustrating going so close in big fights because Tennyson and Carroll were two fellas who fought for world titles.

“The McCullough fight I was winning handily and he caught me with a shot from God. He didn’t even believe he could do that.

“Marco and Tennyson got lucky in my opinion. Jono did beat me in our second fight and the first one against him when I was disqualified I don’t count as a loss.

“I have had enough setbacks, but I keep knocking on the door believing I can do things.”

Geraghty, 29, was based in Spain, but has been preparing in his home city for the Sharp showdown and is trained by his dad, Declan Snr.

And a win against Sharp who is ranked at number nine in the WBO rankings for American Jamel Herring’s world title will get the likeable Irishman’s career firmly back on track.

“I have been knocking on the door for long enough and I believe the time is now,” he added.

“If I didn’t think I was good enough and just believed my own hype I would pack it in, but everyone who knows me can see how good I am.

“I haven’t done half of what I can do. I see what I can do in sparring. I believe I can achieve good things and much more.”

Denzel Bentley Wants To Make His Mark On Heffron on Sept. 27

DENZEL BENTLEY has called for a domestic showdown against middleweight rival Mark Heffron.

The Battersea banger is impressing with each fight and steps up in class at London’s Royal Albert Hall on Friday September 27 when he meets Midlander Kelcie Ball (10-1, 2KOs).

Bentley (10-0, 8KOs) is happy to be pushed towards Heffron even though his rival has had 24 fights, with the only setback coming against Liam Williams in a British title challenge.

Bentley, 24, said: “I would love the Heffron fight. As long as the promoters are happy let’s make it.

“It will be a great fight. We’d put on something great for the fans and it would test us both.

“Whoever comes out on top moves forward and the loser takes a step back and rebuilds. He is perhaps a level above but if the call came I would take it right now.

“There is no reason why it couldn’t happen. We’re both with Frank Warren and that is a fight I look forward to happening. My team wouldn’t say, ‘no’.

“Apart from Liam Williams the domestic division is wide open. I don’t even think Liam is a middleweight unless that is where he’s staying.

“If he goes back down to super-welterweight it’s wide open. I look at the list every day and I believe I can beat them all.”

But Bentley isn’t overlooking his next opponent Ball, who on paper will be his toughest test since turning professional in October 2017.

Bentley added: “It’s a step up and he has a good record. Physically I’m in shape, but mentally I know I’m fighting a tougher opponent.

“I will show that these guys with good records go the same way as everybody else. I don’t think he is a bad fighter, but nothing special.

“I want to work through the best in Britain, but you can’t force people to fight. There is no reward for these guys because I’m just coming up.

“They are not avoiding me, just not considering me. When I do get my hands on a title a lot more will be calling my name.”

Daniel Dubois headlines the bill when he meets Ghana’s Ebenezer Tetteh for the vacant Commonwealth heavyweight crown and there will be a world title clash involving WBO flyweight champion Nicola Adams, live on BT Sport.

Tickets for the September 27 bill at the Royal Albert Hall are available to purchase from www.ticketmaster.co.uk and www.royalalberthall.com. Prices £40, £50, £75, £100, £150 Ringside.