Ryan Garcia could be September 14 savior with Canelo not fighting 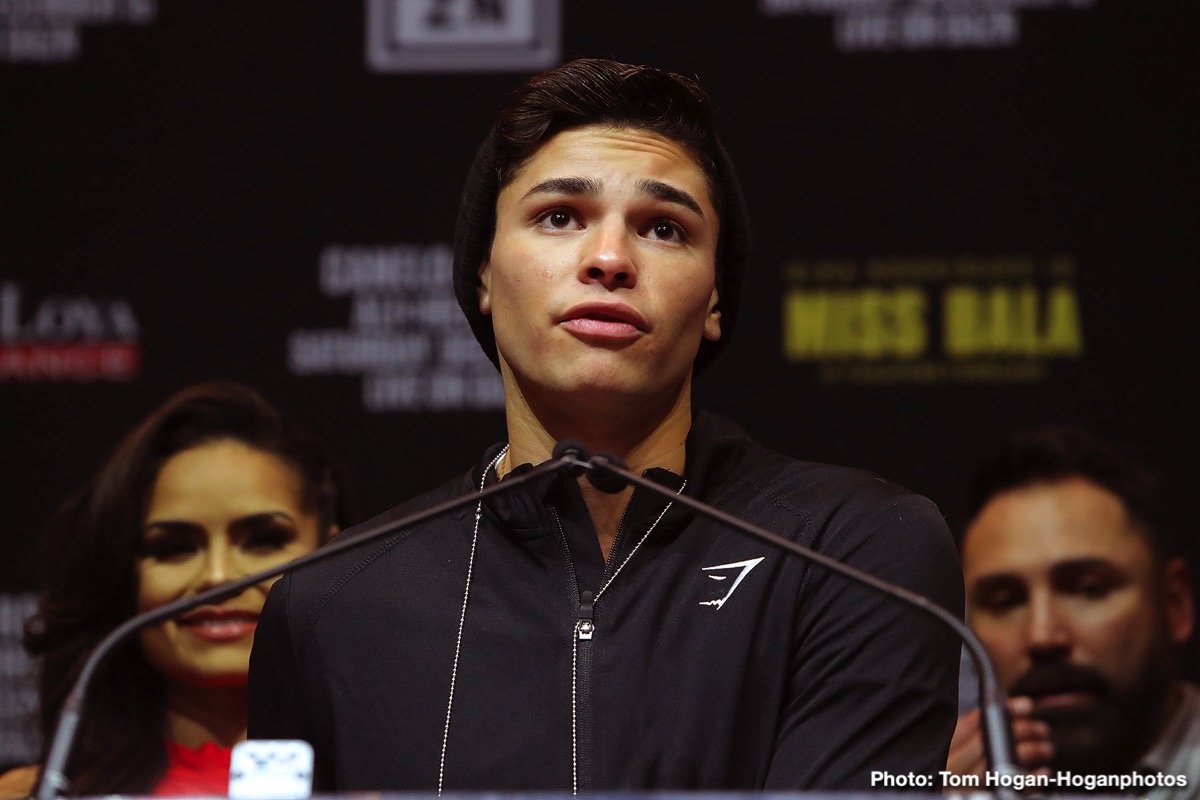 By Aragon Garcia: With Saul Canelo Alvarez not fighting on September 14, it’s up to lightweight contender Ryan Garcia (18-0, 15 KOs) to reel in the fans for his fight on that date against Avery Sparrow (10-1, 3 KOs) on DAZN. Ryan, 20, could be the next superstar in boxing, and he’s in the right place in fighting on a date normally held by Canelo Alvarez on the Mexican Independence Day holiday.

Canelo had previously headlined on this holiday in the last three years, but he dropped out this year due to him not having an opponent signed. He wanted a top level fighter, but there were none available on that date.

Ryan Garcia: Me fighting Gervonta Davis will be “biggest fight in boxing history”

“I feel if we keep doing what we’re doing our fight will be the biggest fight in boxing history,” said Ryan Garcia to TMZ about a fight between him and Gervonta Davis. “I feel like our careers are going to play out like they’re going to play out, but at the end of the day, I still think no matter what happens our fight will still be huge. Of course,” said Ryan when asked if he’ll beat Tank Davis.

“Tank is older than me, but he should have got me when I was 20. I’m 21 now. I’m getting stronger by the day, but regardless our fight will be legendary. We need that. Boxing world needs to see that. Gervonta, what it looks like with his career, he’s not rushing into any big fights. You can see the opposition he’s facing. He’s not really fighting anybody, but that’s what you’ve got to do. You’re building a star,” said Ryan Garcia.

Ryan Garcia vs. Gervonta Davis is going to be a huge fight. Davis is moving up to lightweight, and that’s going to make it a lot easier to make the fight between him and Ryan. Davis (22-0, 21 KOs) has talked a lot about wanting to fight Garcia, but we don’t know how interested he is. Vasiliy Lomachenko is in the 135-pound division as well, but he’s on his way out after wins the IBF belt next year.

“I just look to give a good fight,” said Ryan Garcia to Fino Boxing about his fight against Avery Sparrow on DAZN. “I feel it’s going to bring a lot out of me. It’s going to be a chess-match at the beginning, but you’re going to see what I can do. I’ve been training with Eddy [Reynoso], and we have a plan. We’re going to show it on September 14. I just seen stylistically, he was a hardest fight. Romero Duno is a come forward fighter with no defense. Hector Tanajara is a fighter with no power at all. So I would have walked right through him. He’s a boxer and he’s slick, Avery, and he doesn’t give up. He’s from Philadelphia. So the events going to be better, because he’s going to push it.

I’ve seen that Hector called me out. I’ve seen that Romero was calling me out in a weird way. I don’t even think that was him. I’ve never seen him talk that way in my life. So, I felt like he [Sparrow] was the toughest fight. I picked him. There’s no bad blood on my part. It’s just jealousy and envy. It’s not [trainer] Robert Garcia, but maybe somebody inside his team. I don’t understand it,” said Garcia.

Avery, 25, is a highly technical fighter with excellent boxing skills, and a great pedigree. He only has one career loss, and that was to Jerome Rodriguez by a sixth round disqualification in 2014. It took place a long time ago, and he’s improved a great deal since then. Ryan will have his hands full in this fight, but it’s nothing he can’t handle.

Ryan Garcia says Tanajara has nothing to trouble him

“If they would focus on building up their fighters, and stop worrying about me, they would go up more,” said Garcia. “But they’re always trying to bring me down. In return, that’s going to give me more publicity. So it’s going to backfire on them. Of course, if they really demand it. ‘We really need to see that fight,'” said Ryan about fighting Tanajara. “But most people see Hector, and it’s like, ‘Nah, he’s alright.’ They really don’t see much. He’s a good fighter technically-wise. He has a good jab. He’s not a bad fighter, but he doesn’t have anything to stop me,” said Garcia.

This fight might not be worth it for Garcia to take. The unbeaten Hector Tanajara (18-0, 5 KOs) doesn’t have the rankings to make him a good option for Ryan. He needs to focus more on fighting the elite level lightweights in the division so he can keep improving.

“We gave him three opponents, and he did pick Sparrow,” said Golden Boy Promotions CEO Oscar De La Hoya to Fino Boxing about Ryan Garcia’s next fight on September 14. “Collectively, as his promoters and match-makers, we chose Sparrow. He’s no pushover. He’s undefeated. He has a very aggressive style, but he knows how to box as well, and he’s got a good ring IQ. So it’s going to be one of those fights where Ryan has got to come out swinging for the fences, and take care of business. We’ll see. We feel we’ve got a good fight in Ryan Garcia and Sparrow. It all depends on him,” said De La Hoya when asked how good Ryan can become in the future. “We don’t fully know how far he can go. With a fighter like Ryan Garcia, we’ve got to take it one fight at a time, because he keeps on surprising us. He keeps blowing away through his opponents. So, we’ll see.

He wants to fight for a world title now. We want to make sure as promoters and match-makers the time is right. But being a 21-year-old kid, he wants to move as fast as he can. He wants it now. I want my cake and eat it too as well. Being 21 and having so many followers on Instagram is kind of a blessing and a curse, because so many fighters are calling him out. World champions are calling him out. That’s incredible. So we feel that when the time is right, and it’ll be soon, we’ll throw him in there with a world title fight,” said De La Hoya.

Garcia is improving by leaps and bounds with every fight, and that’s going to benefit him in the future when he’s moved up.

“Ryan Garcia is sitting down on his punches now, which I love,” said De La Hoya. That’s what Eddy Reynoso is bringing out in him. Ryan is such a fast fighter with his hands, that he tends to throw everything with no power. It’s all speed. But now he’s focusing more on power. The speed is there. But now that he’s focusing more on power, he’s going to be able to do some damage. The fact that he’s moving his head more, not falling back as much, and not running as much, I think it’s going to be a big plus for his arsenal in many fights to come. Absolutely,” said De La Hoya when asked if Saul Canelo Alvarez is mentoring Ryan Garcia.

“It’s great. It’s wonderful. I’m always happy to give Ryan advice the way I’ve given Canelo advice and all our fighters. But to have somebody that is the face of boxing along side of you and training together, and gaining that experience, you can’t put a price on that,” said De La Hoya about Ryan training alongside Canelo with Reynoso. “So it’s great that they’re together, and they’re working together. Hopefully, Ryan Garcia gets to the top as fast as Canelo did,” said De La Hoya.

Jermall Charlo to defend against Dennis Hogan in December »