Ryan Garcia co-feature on Canelo vs. Kovalev card on Nov.2 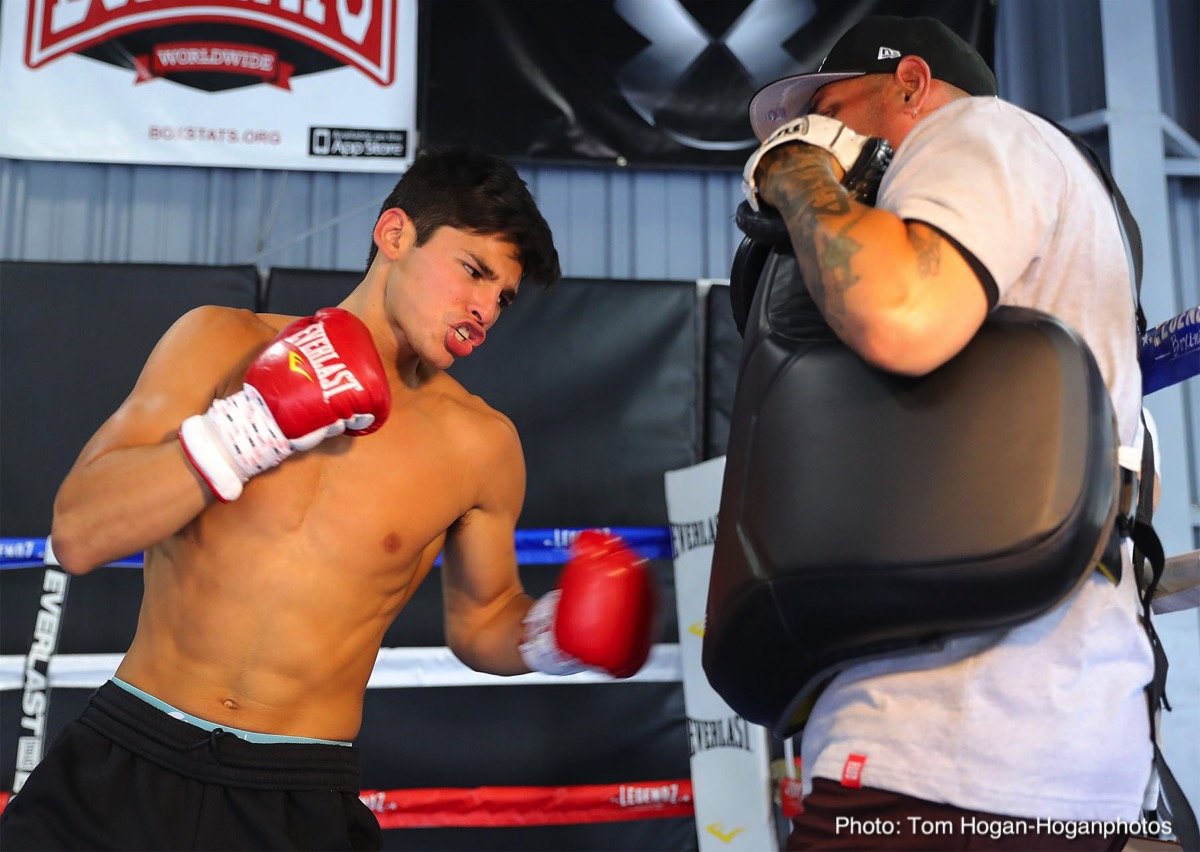 By Dan Ambrose: Golden Boy Promotions have patched up their relationship with unbeaten lightweight contender Ryan Garcia (18-0, 15 KOs) by giving him a multi-year contract extension. Garcia will be fighting in the co-feature bout on the Saul Canelo Alvarez vs. Sergey Kovalev card on November 2 on DAZN.

Having the still inexperienced Garcia fight as the chief support for the Canelo-Kovalev card is a questionable move on Golden Boy’s part, because he’s not a world champion. It’s unclear whether Garcia ever will be a title holder. His best wins have come against Jose Lopez, Carlos Morales and Jayson Velez. Those are NOT major players at 135.

Co main event on the Canelo vs Kovalev card! Time to show the world!

Ryan Garcia a diamond in the rough

Golden Boy is taking a risk in signing Garcia to a multi-year extension, since it’s still not a given that he’s going to pan out to become a world champion. Right now the only thing you can say is Garcia is a decent fringe contender at 135, but clearly not ready to face the best. Some boxing fans compare Ryan to a young Oscar De La Hoya, but that’s not a fair comparison.

De La Hoya turned pro at 19 after having won a gold medal in the 1992 Olympics. Without question, Oscar was a terror at lightweight, and pretty much the finished product. In contrast, Garcia is still green, and in need of years of development. He’s not at the level De La Hoya was at, and he may never get there. De La Hoya had more hand speed, size and punching power than Garcia.

Just signed one of the most lucrative boxing deals for a prospect in the History of the sport 👑 Thank you to my team and @OscarDeLaHoya @makeawar pic.twitter.com/rClN7a4qC7

Ryan Garcia has age on his side. He’s only 20, so it’s possible he can improve and potentially become a world champion. That may not happen in three years unless Vasiliy Lomachenko, Devin Haney, Teofimo Lopez and Luke Campbell leave the division. Garcia would struggle against those fighters right now.

Ryan’s opponent for November 2 will be Romero Duno (21-1, 16 KOs), as long as they can get the fight negotiated. Garcia, 20, wanted to fight Duno last Saturday night after his opponent Avery Sparrow was arrested, and pulled from the card.

“We’re going to try to make the fight,” Golden Boy Promotions president Eric Gomez said to ESPN.com about Garcia vs. Duno. “Ryan said he really wants to fight Duno and it’s a very good fight. Duno is in the Philippines now so we haven’t had a chance to talk to him yet.

Things weren’t looking good last weekend between Golden Boy Promotions and Garcia after the Sparrow fight fellow through for him. Garcia was upset about Golden Boy not getting him a replacement opponent so that he could fight on the undercard of Jaime Munguia vs. Patrick Allotey card on DAZN in Carson, California. Ryan wanted to fight #10 WBO lightweight contender Romero Duno.

There was some confusion over why Golden Boy didn’t make the fight. Garcia wanted more money, and then someone from Golden Boy said that the fight was turned down by Ryan’s trainer. Ryan denied that his trainer turned it down. Considering everything, it was good that Garcia didn’t take the fight with Duno on short notice, because he might have lost. That would have been bad for Golden Boy.

Duno looked impressive in stopping Ivan Delgado in the 7th round last Saturday night on the Munguia-Allotey card. Duno is a pretty tough fighter with heavy hands. His lack of hand speed, and his poor defense will give Garcia an advantage. It still won’t be an easy fight. Garcia could end up looking bad against Duno if he runs from him.

“From the second we discovered Garcia, we knew he was different,” said De La Hoya. “We knew he was special. We knew he could move the needle. Besides his amazing talent, he brings an outside appeal that few fighters can achieve. At the same time, he also needs the right environment to develop, and that environment is with us. Under our guidance, I have no doubt that this young, charismatic fighter will become the biggest star in the sport.”