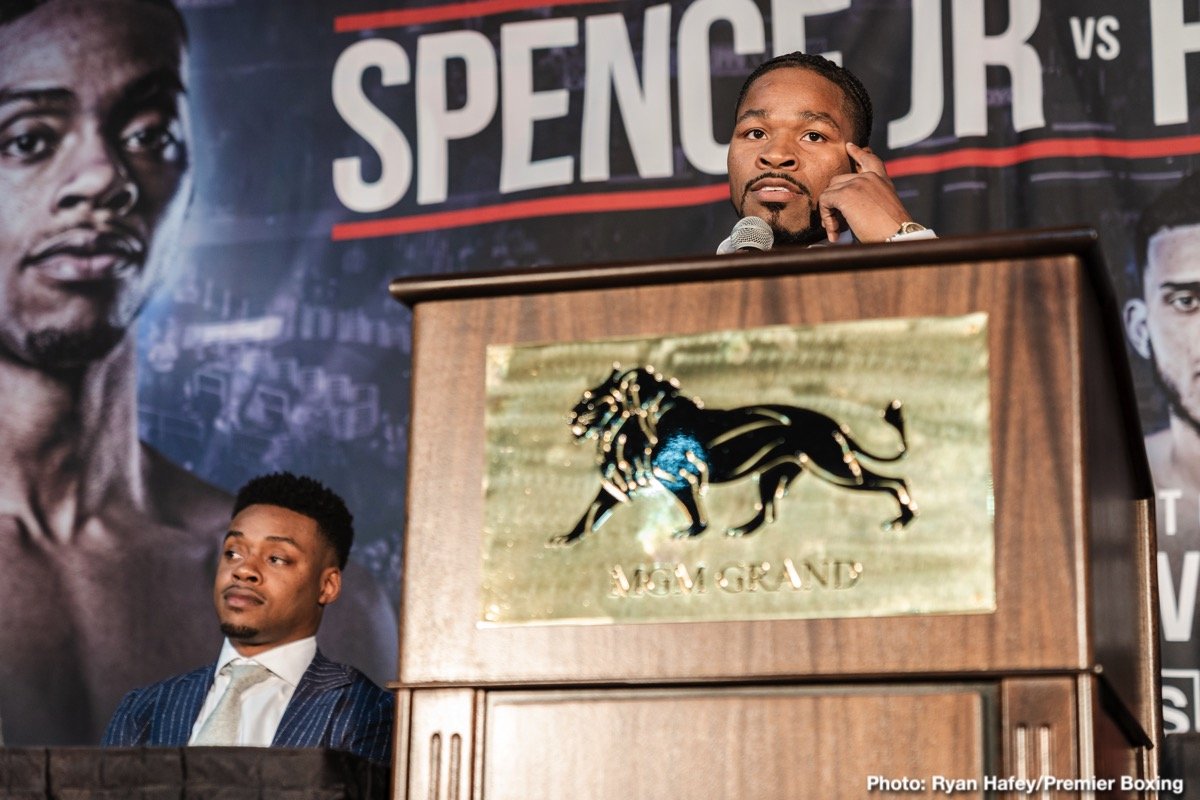 By Kenneth Friedman: Shawn Porter says he never hesitated for a moment in considering whether to take the fight against Errol Spence Jr. on September 28 in their unification match on Fox Sports PPV. WBC welterweight champion Porter (30-2-1, 17 KOs) says he doesn’t view the unbeaten Spence (25-0, 21 KOs) as the “boogie man” in the 147 pound division like many boxing fans do.

Porter says he doesn’t see Spence, 5’9″, as being one of the bigger fighters at welterweight. The 5’7″ Porter just views Spence as a good fighter that’s standing in his way. He doesn’t say who feels is bigger than Spence, but obviously there are some bigger guys in the weight class.

Unfortunately, they’re not very good. So being bigger at 147 doesn’t necessarily translate to being a good fighter. Most of the quality fighters at 147 are from 5’6 1/2″ to 5’9″. The guys that don’t fit those perimeters in the division aren’t among the elite right now.

“I would never shy away from any opportunity or any challenge. So for me when it comes to taking on Errol Spence, it’s like taking on another fighter,” said Porter about his fight on September 28. “It’s not like me taking on the boogie man or the best welterweight in the world.

To me, I’m taking on another great, exciting fighter, and I’m going to beat that great exciting fighter. I think it’s Spence specifically, because not only him having a belt, but for who he is and what he’s done in the sport, as far as him being undefeated, and him being seen as the boogie man in the division. I’m like yo, I need to beat that guy. That’s what I need,” said Porter.

Porter, 31, is the underdog in the fight with the odds-makers. They’re picking against Porter because he’s not looked great in his recent fights against Yordenis Ugas and Danny Garcia. He beat both of them, but they weren’t impressive performances. Porter edged out Garcia, and his fight with Ugas was quite controversial. That was a match that some boxing fans felt that Ugas was robbed. Porter was the popular guy going into the fight, and the close rounds went his way.

Porter not worried about Spence’s size

“I’m 31 now, and this is 100 percent familiar territory for me,” said Porter. “When you talk about fighting the mandatory challenger Yordenis Ugas. Why would you fight him? A lot of questions were proposed to me. In my mind, he’s the mandatory that they’re telling me I have to fight. A lot of the guys I fought at amateur were bigger than Errol Spence. They weren’t just bigger, they were a lot bigger. I’m talking about guys like Danny Jacobs, who fights at 160 pounds. He’s at 168 pounds now.

I fought against Oleksandr Usyk, who is a unified champion over there in Ukraine, and he’s at heavyweight now. I fought him at 165 pounds when we were 20-years-old, and beat him. I’ve got a win over Danny Jacobs as well. Demetrius Andrade, we were 1-1 in the amateur division. The last time we fought, we were 165 pounds, and I beat him at a world ranked national tournament as an amateur. So the experience against taller, bigger opponents is there,” said Porter.

Spence might give up his height, and choose to brawl against the shorter Porter in close. It would be a risky thing for Spence to fight Porter like that, because that’s his game. Porter likes to fight in close, and he’s dangerous with his head-butts and elbows. If Spence chooses to fight Porter on the inside, he’ll be betting that he can knock him out before he suffers a fight-ending cut.

“You’re looking at Errol Spence Jr.  I don’t look at him like he’s a bigger guy than me,” said Porter. “And, I don’t think he’s one of the bigger guys in the division. I think that he’s been matched up against a lot of guys that have made him look more powerful, and bigger than he really is. Trust me when I say he’s met his match in this one,” said Porter.