Oleksandr Usyk: “I will definitely succeed, because I believe in it” 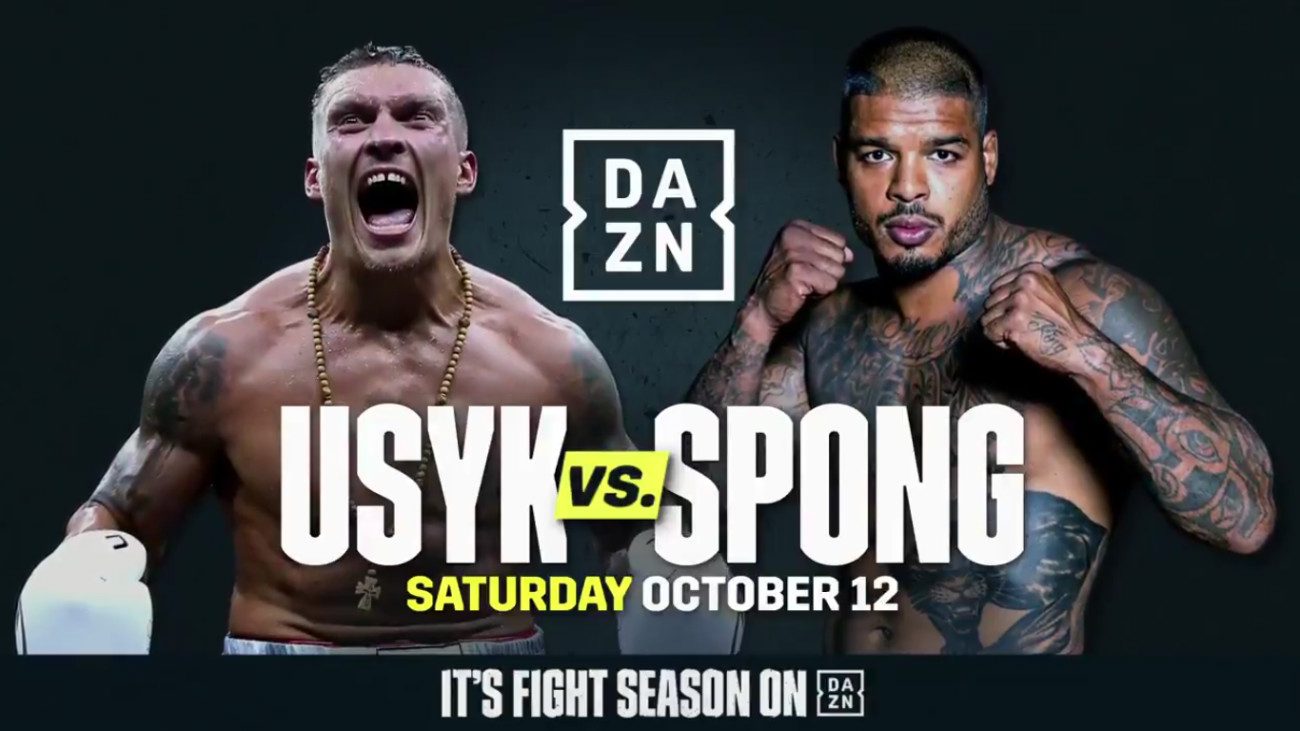 By Matt Lieberman: Former undisputed cruiserweight champion Oleksandr Usyk fully believes that his move to heavyweight is going to end in success with him accomplishing his goals of becoming a world champion. Despite his past success in winning a gold medal in the 2012 Olympics and unifying the cruiserweight division, Usyk (16-0, 12 KOs) has a lot of doubters that are telling him that he’s going to fail, and that he won’t do well at heavyweight.

Usyk says he’s not listening to them, and he will do the opposite of what they’re telling him to do. Thus far, Usyk has proven his critics wrong by unifying the cruiserweight division. It’s going to be a lot tougher for Usyk to continue to prove his detractors wrong.

#1 ranked WBO contender Usyk is making his heavyweight debut against the powerful Tyrone Spong (14-0, 13 KOs) next month on DAZN on October 12 at the Wintrust Arena in Chicago, Illinois.

Oleksandr Usyk not listening to critics

“Many people are telling me, ‘You shouldn’t go there. You are not a natural heavyweight, and you are small. You won’t make it,'” said Usyk. “Throughout my whole life, I’ve been hearing from a lot of people that I won’t make it. This is true for those who are not trying. I won’t be listening to those telling me, ‘Don’t do this.’ I will do the opposite, and I will definitely succeed, because I believe in it,” said Usyk.

There haven’t been too many cruiserweights that have been able to make the transition to heavyweight to accomplish big things in recent years. The last fighter to make the jump to find success was Evander Holyfield. He moved up from cruiserweight to heavyweight in the 1980s, and found a lot of success in winning the IBF/WBA/WBC titles. For an 11-year period, Holyfield was one of the best heavyweights in the division. However, he was a lot different fighter than Usyk. Holyfield was more of a puncher, who would take the fight to his bigger opponents.

Usyk not the biggest puncher

Usyk doesn’t compare with someone like Holyfield, who was already equipped to compete at heavyweight when he moved up in weight in 1988. At cruiserweight, Holyfield was absolute terror with the way he was knocking everyone out. In comparison, Usyk is more of a boxer than Holyfield, and he doesn’t have the same kind of power game that he had.

What Usyk has going for him that Holyfield didn’t is he’s moving up to a heavyweight division that has a lot of flawed fighters. Unlike when Holyfield fought, there isn’t a Lennox Lewis, Riddick Bowe, Mike Tyson or George Foreman that Usyk has to deal with.

What happens when Usyk shares the ring with Anthony Joshua, Deontay Wilder or Andy Ruiz Jr. Can he out-box those guys over 12 rounds?

Oleksandr’s next fight against Spong will give him a good taste of what it’s going to be like for him in fighting at heavyweight. Spong is a relative newcomer to boxing, but he’s got one-punch power in either hand. If Usyk is able to handle the big power shots from Spong, then there’s a good chance that he’ll be able to handle the bigger puncher’s power in the division. Usyk will need to develop his power game though, because he can’t depend on being able to go 12 rounds repeatedly against the likes of Wilder and Joshua. You let those guys hit you for 12 rounds, there’s a good chance they’re going to hurt you with something.

Boxing » Aleksandr Usyk » Oleksandr Usyk: “I will definitely succeed, because I believe in it”