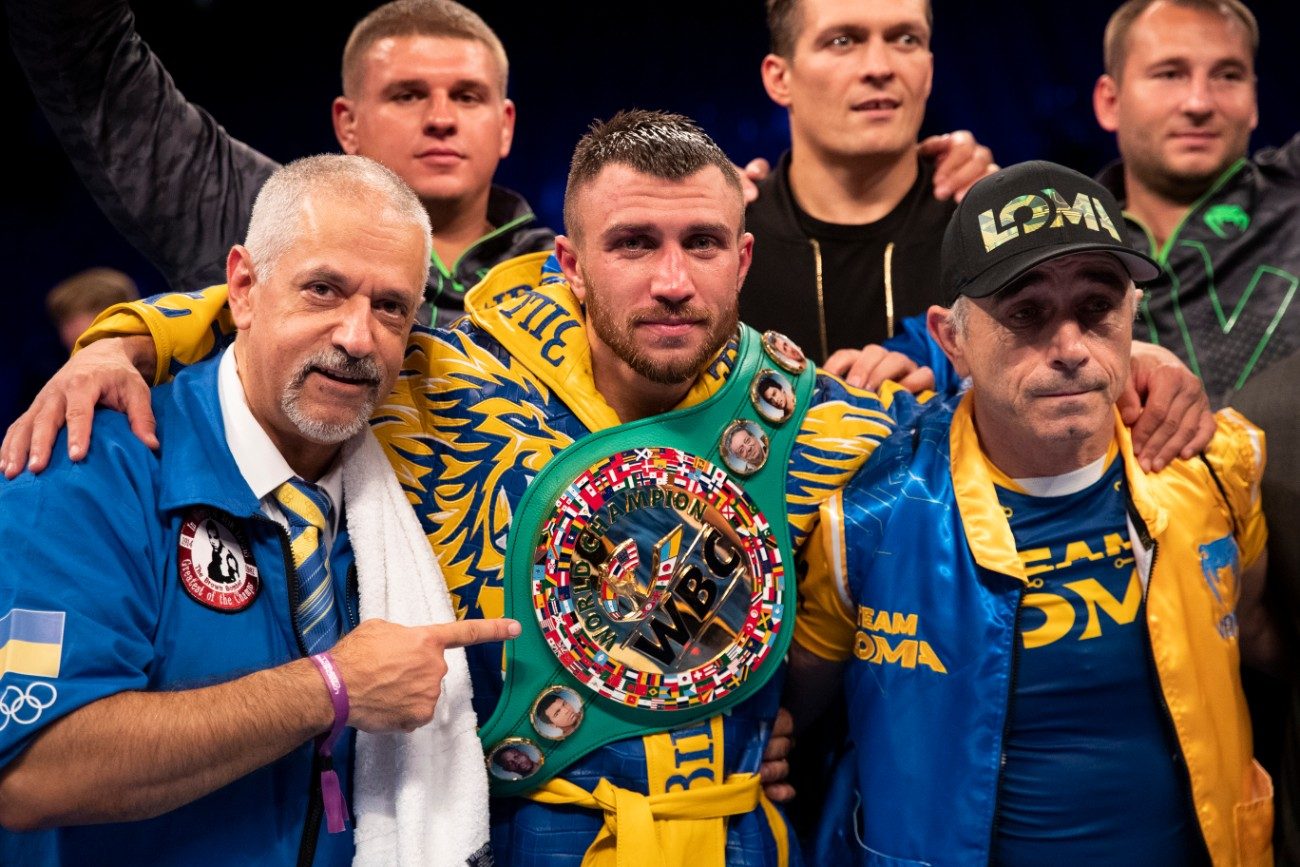 By Mark Eisner: Vasiliy Lomachenko isn’t at the level of the superstars of the past after his win over Luke Campbell, says Matchroom promoter Barry Hearn. Although Lomachenko (14-1, 10 KOs) beat Campbell (20-3, 16 KOs) by a set of lopsided scores last Saturday night, Hearn saw the fight as closer.

Lomachenko won the vacant WBC lightweight title to add to his WBA and WBO belts at the O2 Arena in London. It was supposed to be a mismatch, but Lomachenko found out early on that Campbell’s superior size and power more than made up for his shortcomings in the skills department. Lomachenko was given the victory by the scores 119-108, 119-108, and 118-109. In the 11th, Lomachenko knocked Campbell down with a right to the head.

“I didn’t have the gap anywhere near as wide,” said Barry Hearn to IFL TV in disagreeing with the wide scores by the judges. “And, I thought Luke lost four rounds maximum, I thought he boxed brilliantly, perhaps didn’t go for gold enough. I was slightly disappointed with Lomachenko, to be honest. We’ve built him up as this superstar, but I can’t put him in the same category as the superstars of yesteryear on that performance. A great fighter, obviously, but we can’t mention him in the same breath as some of the all-time greats yet,” said Hearn.

Hearn didn’t mention any of the names of the superstars from the past that Lomachenko doesn’t measure up to. But in looking at greats like ‘Sugar’ Ray Leonard, Muhammad Ali and Aaron Pryor, Lomachenko doesn’t measure up to those guys. That’s a short list. Lomachenko is a pure boxer, and he’s not going to ever be an exciting, explosive type of fighter like the legends from the past. Lomachenko arguably isn’t as exciting to watch as former light welterweight champion Kostya Tszyu or Gennady Golovkin. He’s not that type of fighter. For fans that like to watch technical boxing, Lomachenko is their cup of tea. But for the people that enjoy seeing knockouts, and slugging, then Lomachenko isn’t going to interest them.

Lomachenko is never going to be as exciting to watch as Golovkin, Tszyu or Leonard. He doesn’t have the hand speed of Leonard, and he’s nowhere near as powerful as Tszyu or Golovkin. Tszyu was a little bigger than Lomachenko, but much more interesting to watch. There’s no way you can compare the two.

“I wasn’t particularly impressed. I thought he had Campbell hurt a few times, he didn’t finish the job,” said Hearn. “And, I thought he coasted a few rounds, I didn’t see him look the dynamic fighter we’ve built ourselves up to believe he is. He’s obviously very good, but we’re talking about legendary status and that wasn’t a legendary status type of fight.”

Lomachenko looked like he was only capable of fighting hard for short bursts, and then he would tire and need rest breaks. That’s the reason why Campbell was able to survive when he had him hurt on a number of occasions during the fight. Lomachenko had the talent, but not energy or the power to finish the job. His lack of punching power kept Lomachenko from scoring a knockout.

Last night was one hell of a battle. I’m gutted it didn’t go my way but respect to Loma. Thank you to Matchroom, my team, Shane & the fans. As a fighter, nothing is worse than the pain of a loss but this will not stop me, I will be back and I will be World Champion #Coolhand pic.twitter.com/LK8C4U8Fm4

What you see is what you get with Lomachenko. He’s not going to become an exciting fighter at this point in his career, because he’s getting older. This is as good as it gets with Loma, and if anything, he’ll start going downhill.