Golovkin: Derevyanchenko is a dangerous fighter 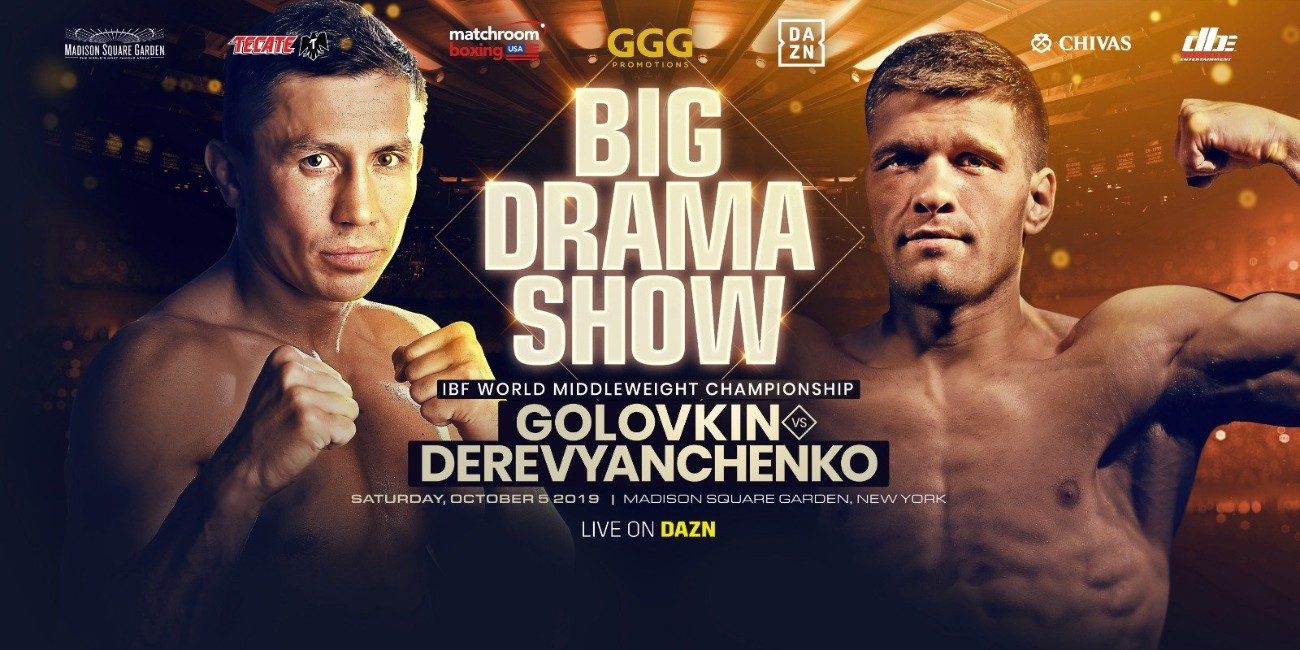 By Barry Holbrook: Former middleweight champion Gennady ‘GGG’ Golovkin (39-1-1, 35 KOs) is taking his next opponent Sergiy Derevyanchenko (13-1, 10 KOs) seriously for their fight a weak and a half from now on October 5 on DAZN. Although Golovkin has backtracked on his previous comments about being “scared” of the 33-year-old Derevyanchenko, he still says he’s a “little afraid” of what could happen.

There’s a lot riding on the fight for the 37-year-old Golovkin in terms of big fights, and with him signed to DAZN with a lucrative contract. Golovkin and Derevyanchenko are only separated by four years, but that could be enough for the younger fighter to beat him. Some boxing fans think Golovkin has shown slippage in his game in his last two fights against Steve Rolls and Saul Canelo Alvarez. Golovkin could hit with some shots in both fights. He beat Rolls by a 4th round knockout last June, but it wasn’t the great performance that some fans were expecting from him.

“I definitely see him as a dangerous fighter, because he’s an experienced fighter,” said Golovkin to Behind The Gloves in talking about Derevyanchenko. “I also know him for a long time. Indeed, it’s going to be a very interesting and dangerous fight. Sergiy’s team knows me very well. They’ve seen me with other fighters, and that makes this fight much more interesting, because they’re already familiar with me. It’s not that I’m afraid of him, but yes there are certain things that I need to be aware of, a little bit scared of.

“There are a lot of things connected to the fight, and a lot of things at stake. This is boxing. One punch can change anything. I’m not ready to be punched like that, and there are a lot of things behind that. This fight is going to be very interesting. I’m not afraid. I’m aware of what to expect from him, and I’m aware of my opponent. It’s not fair to put down the less experienced opponents. I think he’ll be doing everything and more in this fight. He’ll probably be ready to live or die in this fight, and that’s why it’ll be more interesting and exciting. And if he’s not going to do that, then maybe it’ll be easier for his opponent,” said Golovkin.

Golovkin should have already fought Derevyanchenko last year when he was his IBF mandatory. GGG ended up losing his title when he failed to fight Derevyanchenko. A lot of boxing fans at the time said Golovkin chickened out by not fighting Sergiy, and it cost him his IBF title.

GGG takes issue with Canelo telling him what to do

“I don’t think he’s in the position to evaluate my career, and tell me what I need to do,” said Golovkin in response to the comment that Canelo has recently made about GGG needing to take risks with his career the way he is. “Let him sort out his own dirty laundry before he comments on me. I don’t really think about him too much,” said GGG.

In a way, Canelo is helping Golovkin increase his popularity, and make their trilogy fight bigger by advising him to face better opposition. GGG is taking the advice from Canelo the wrong way. If he looked at the big picture, he’d realize that Canelo is right. Golovkin needs to take risks with his career by facing better opposition before they fight each other again. The Mexican star isn’t trying to be mean-spirited in giving Golovkin helpful advice. He’s basically telling him what a lot of fans have been saying that he needs to fight better guys.

“They’re both high level,” said Golovkin about Sergey Kovalev and Canelo Alvarez. “I’m really happy for Sergey Kovalev. He can earn some money. As far as his opponent, I don’t think about him at all.”