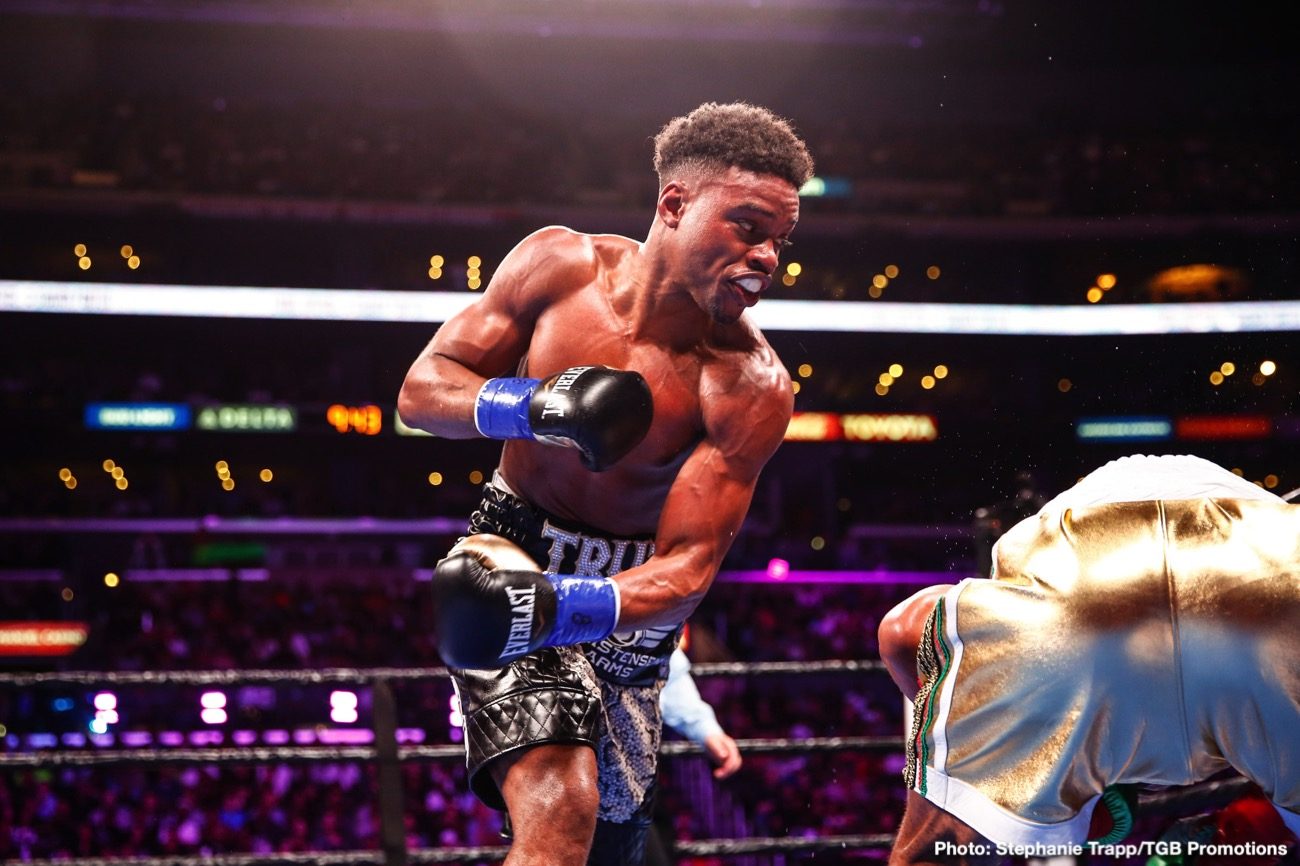 By Robert Addams: Off the back of his hard-fought victory over WBC welterweight champion Shawn Porter last Saturday night, IBF/WBC unified 147-lb champion Errol Spence Jr. (26-0, 21 KOs) will now be facing Danny Garcia on January 25 on PBC on Fox Pay-Per-View, according to @MikeCoppinger.

Garcia (35-2, 21 KOs) already called Spence out inside the ring last Saturday after Errol had defeated Porter (30-3-1, 17 KOs) by a 12 round split decision at the Staples Center in Los Angeles, California. Fox Sports TV reporter Heidi Androl stated that she was told that Danny Garcia will be Spence’s next opponent, and this comes from up high.

Boxing fans would like to see Spence face champions Manny Pacquiao or Terence Crawford, but those matches aren’t happening yet. Pacquiao is heading in the direction of a title defense against Mikey Garcia, while Crawford will be defending next against ‘Mean Machine’ Egidijus Kavaliauskas on December 14.

“The last time Terence Crawford fought on pay-per-view, he did 100,000 buys,” said Spence last Saturday night in rejecting Crawford as his next opponent. “I’m not worried about Crawford right now.

Crawford’s promoters at Top Rank Boxing made the baffling move of having him defend against past his best former light welterweight champion Amir Khan last April on ESPN pay-per-view. The fight is said to have brought in only 100,000 buys. Khan is no longer relevant in the 147-lb weight class.

Even if Crawford had fought Khan on regular ESPN, it likely wouldn’t have big numbers. Khan has been on the downside of his career since suffering consecutive losses to Lamont Peterson and Danny Garcia.

Crawford will get his chance to fight Spence eventually in the future. It’s a fight that’s destined to happen as long as both guys remain champions.

Danny Garcia: I believe I can beat Spence

“He’s never faced a puncher that can hit as hard as me, and he likes to stay there,” said Danny Garcia to Fighthype about Spence last Saturday night following his win over Porter. “That’s why I like this fight so much. That’s why I went inside the ring. I wasn’t going to go in there for no reason. I want this fight because I believe I can win this fight. It’s in the talks. It definitely can happen next,” said Garcia about Spence.

What Danny and a lot of boxing fans fail to realize is Spence went to war with Porter, because he said he couldn’t beat him in a slugging type of fight. Porter and a lot of people said Spence couldn’t fight on the inside in a rough and tumble fight. That put Spence in a situation where he had to fight Porter’s style on the inside, because if he failed to do so, fans would have dumped on him.

NEWS:   Amir Khan: 'I can fight Errol Spence if I want'