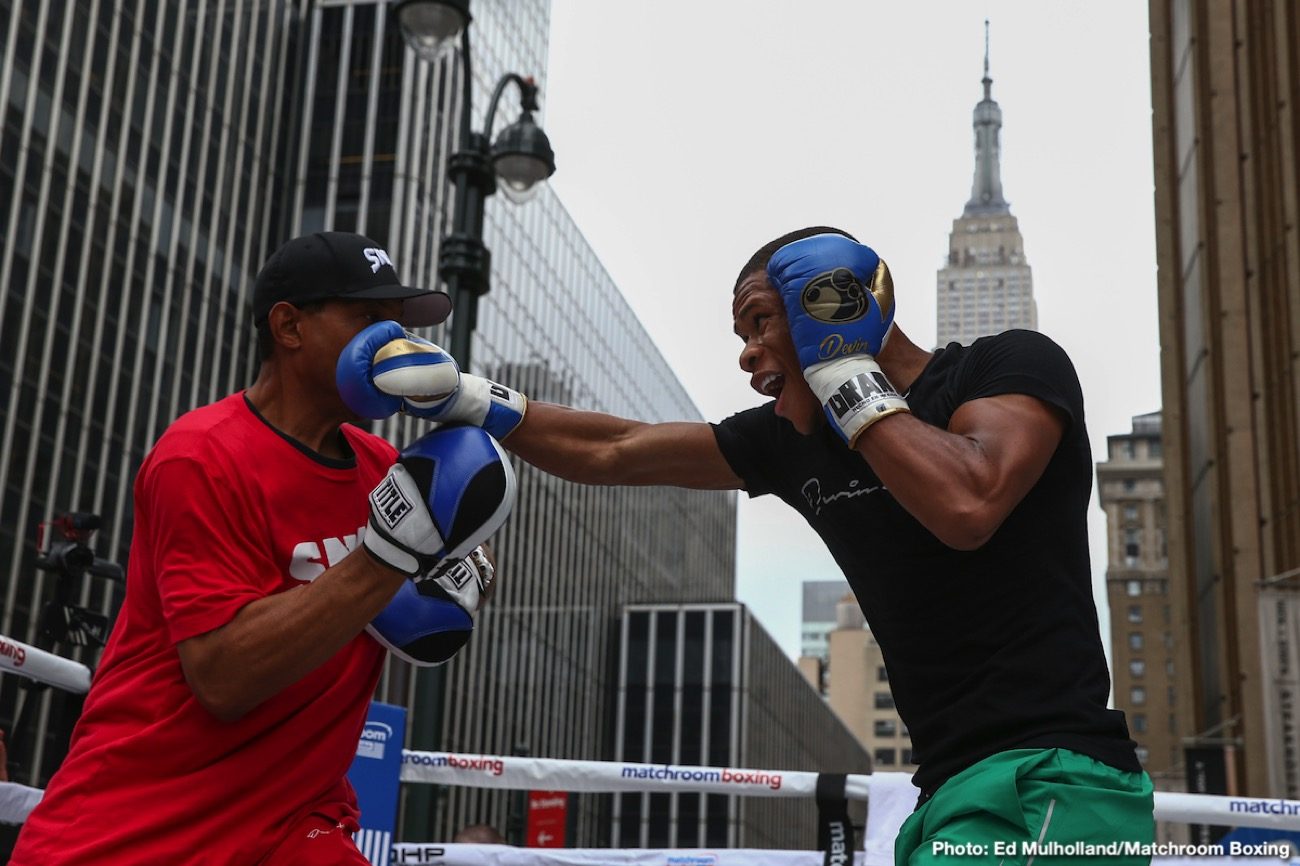 By Dean Berman: Devin Haney believes he’s got the talent to give WBA/WBC/WBO lightweight champion Vasiliy Lomachenko a lot of problems. Haney (22-0, 14 KOs) sees himself matching up well with the 31-year-old Lomachenko (14-1, 10 KOs), who is starting to show signs of age.

This Friday, Haney will be looking to lock himself in as Lomachenko’s mandatory when he faces Zaur Abdullaev (11-0, 7 KOs) in a WBC eliminator on DAZN at Madison Square Garden in New York. The interim World Boxing Council 135-lb will be on the line for the Haney-Abdullaev fight. Haney’s excited about the interim WBC belt being on the line, because he believes that Lomachenko will vacate the belt soon if/when he unifies the lightweight division in early 2020.

Lomachenko will be fighting the winner of the fight between IBF lightweight champion Richard Commey and Teofimo Lopez early next year.

Haney ready for whatever Abdullaev brings

“I’m feeling good, I’m feeling ready, and I’m ready to put on another good performance,” said Haney to Fighthub. “Pretty soon I’m going to be looking to move up. It all depends on how this title shot, and how this rankings plays out. I’m not going to stay at 135 for too much longer if I don’t get a title shot. I watched a little of him. I know he [Abdullaev] tries to put pressure, and tries to break his opponents down to the body.

I know at this point at this spot, the winner goes on to bigger and better things. So I know he’s going to give his all. I know he’s going to come to fight. He’s not going to lay down. So I prepare well, and I’m ready for whatever he brings to the table. He’s kind of a similar style as my last opponent [Antonio Moran]. So hopefully it ends the same way as my last one,” said Haney.

Abdullaev, 25, is a good fighter with decent power, and a solid record. His best win to date came against Hank Lundy last year in September. Abdullaev beat Lundy, 35, by a narrow 10 round decision. The lack of punching power from Abdullaev is what’s going to get him in trouble against Haney. Abdullaev only has one way of winning, and that’s to beat Haney by a decision. That means Abdullaev will need to last 12 long rounds with Haney hitting him with huge shots, and that’s going to make it difficult for him.

Haney says he matches up well with Lomachenko

“This means so much. This basically is fighting for a world title,” said Haney. “This is for the interim [WBC]. So the winner, if Lomachenko vacates, the winner may go up and be the world champion. This means so much. Loma looked good [against Luke Campbell]. I try not to judge people from one performance, because we’re boxers, we’re humans, and we have an off night on any given night. In the fight, he showed some flaws. He showed that in his fight Campbell.

If he was a guy with more speed, with more ring IQ, and a guy that is a little big younger, and more explosive than Luke, who knows what would have happened? I think the 135 pound division is a little harder for him [Lomachenko], because guys are much bigger, and stronger, of course. I think he’s very dominant at 130. 135 might be a bit too much. And he says he can make 126. I couldn’t make 126. I couldn’t make 130. I think I match-up well [with Lomachenko], because I have speed, movement, and I have good ring IQ,” said Haney.

Haney might have too much size and power against Lomachenko, which could explain why Bob Arum doesn’t want to make the fight. Arum isn’t interested in letting Lomachenko fight Haney in 2019 and 2020.

“I feel he’s fought some good opponents, but he hasn’t fought anybody with a style like mine,” said Haney about Lomachenko. “I feel like my style might be tailor-made for him, and I have youth on my side. Lomachenko is not getting any younger. He’s getting older by the day, which he’s still putting on good performances. He’s still a good fighter. I don’t want to fight him because he’s a bad fighter.

I want to fight him, because they say he’s the best. We’ll have to see. If the fight happens, we’ll have to see. I see that Lomachenko makes mistakes that I can capitalize on. Definitely, it won’t be easy. At the top level you won’t get no easy fights, and I believe that. I’m ready. One thing I’ll say is I’m a man. If someone is better than me, then beat me, and show me. I can take my loss like a man. I can take it on the chin. I have no problem with that,” said Haney.

Lomachenko has fought several excellent fighters during his career in Orlando Salido, Luke Campbell and Nicholas Walter. But none of them have a fighting style that Haney has.