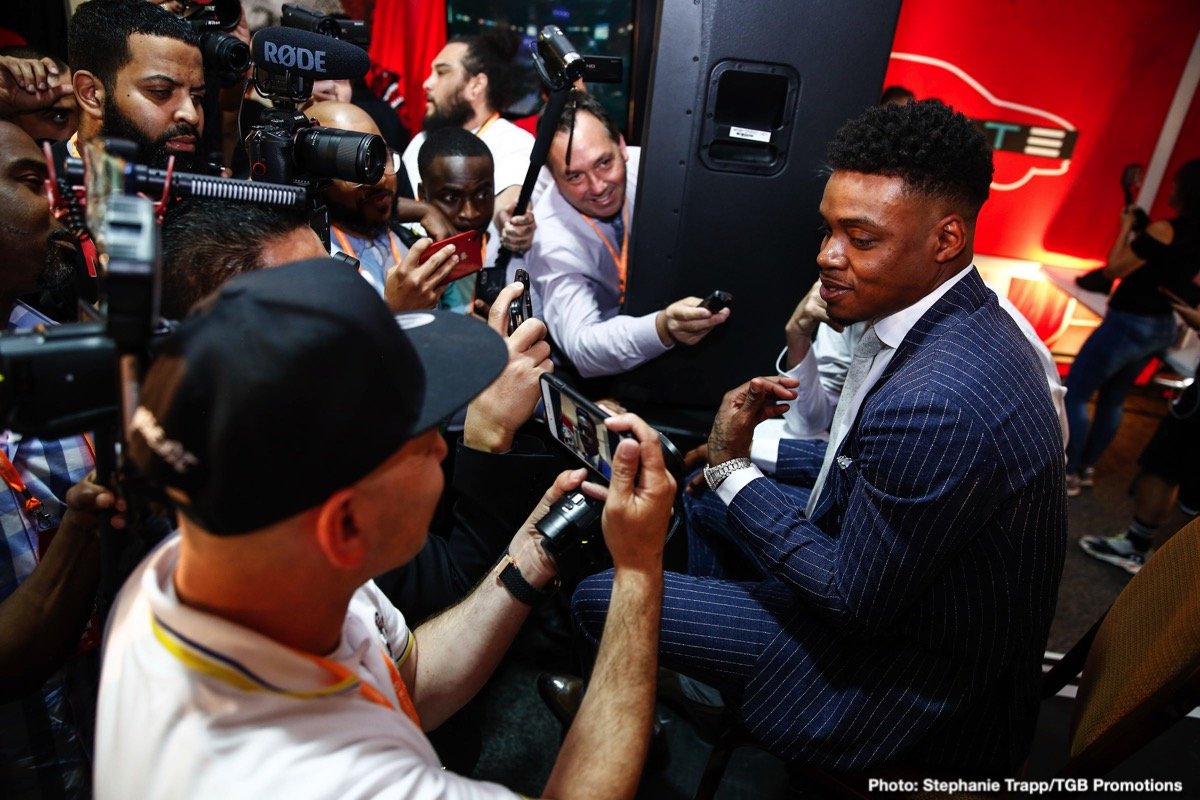 By Mike Smith: A highly ambitious sounding Top Rank promoter Bob Arum believes he can negotiate a unification fight between Errol Spence Jr. and Terence Crawford for early 2020. Arum says the Spence-Crawford is the only match in the welterweight division that brings in big numbers.

Arum wants the Spence vs. Crawford unification fight to take place in early 2020. However, that might be a tad bit premature on Arum’s part, as Spence (25-0, 21 KOs) has options for other fights against Premier Boxing Champions fighters like Manny Pacquiao. Spence can also fight these PBC fighters:

Arum says Wilder-Fury will be used as blueprint in negotiating Spence vs. Crawford fight

Top Rank boss Arum says he wants to use the Deontay Wilder vs. Tyson Fury fight negotiations as a blueprint to make Spence vs. Crawford. Wilder-Fury was done on a 50-50 purse split. Crawford has made it clear he wanted a 50-50 split for the Spence fight, and that has not been well received by him. If IBF welterweight champion Spence (25-0, 21 KOs) beats WBC champion Shawn Porter (30-2-1, 17 KOs) this month on September 28th, it’ll make him the IBF/WBC champ.

Spence will have two titles to Crawford’s one. With Spence being a two-belt champion at 147, Crawford is going to be in a bad position to ask for a 50-50 split. Crawford and Arum can ask Spence for parity, but that’s probably not going to happen in this lifetime. It would be best for them to come to the negotiating table ready to agree to a 60-40 or 70-30 split in Spence’s favor. If not, then Crawford will be stuck with fighting the like of Egidijus Kavaliauskas.

“I would hope next year, early next year, we could get that fight,” said Arum to fighthype about the Spence vs. Crawford match. “That’s the only fight makes sense in the welterweight division in getting a big number. Spence and Porter is a good fight, but it’s not a pay-per-view fight. But if Spence and Crawford win their fights this year, that’s a major fight.

That is correct,” Arum said when told that the Deontay Wilder vs. Tyson Fury fight is a good blueprint on how to get the Spence-Crawford fight done in terms of purse splits,” said Arum.

It sounds nice that Arum wants to make the Spence vs. Crawford fight, but it’s just not realistic right now. Even if Crawford and Arum come to the negotiating table with realistic expectations, they’ll still unlikely to get the fight. Spence has a backlog of interesting options for him against PBC fighters. There’s no rush in Spence fighting Crawford.

Arum willing to work with Haymon

“The idea that promoters won’t work together is ridiculous,” said Arum. “We always believe we should work with the other side whatever the side is. I think Al [Haymon] is coming around to that,” said Arum. Listen, we just did a big fight with Eddie Hearn in England where he was the main promoter, and ESPN+ showed the fight,” said Arum.

‘The fight before that was [Anthony] Crolla, and that was his fighter. And of course, we had Jose Ramirez go over to DAZN, and fight [Maurice] Hooker, and came back to ESPN. He left with one title, and came back with two. So that was a pretty good deal, and a big bag of money,” said Arum.

What Arum is failing to say in giving his examples of working with Matchroom promoter Eddie Hearn is those fights favored his own fighters. It’s true that Arum worked with Hearn twice in shared promotion fights, but it both cases it was his fighters Vasiliy Lomachenko and Jose Ramirez that were in against guys that they could beat. Lomachenko destroyed Hearn fighter Anthony Crolla by a 4th round knockout last April.

There was zero risk for Arum in that fight, because Lomachenko was way too good. In WBC light welterweight champion Jose Ramirez’s fight with WBO champion Maurice Hooker last July, he stopped him in six rounds. Ramirez came into the fight a favorite. So it was an easy fight for Arum to make, because there was little risk of his fighter Ramirez losing. Arum is willing to work with Haymon, but you have to wonder if it’s worth if for Spence to fight Crawford unless the purse split makes sense. If Spence gave Crawford a 50-50 deal, he’d arguably be overpaying him. Crawford hasn’t beaten anyone good at 147, and he’s not a hugely popular fighter outside of Nebraska.

Is Spence looking past Porter? @mikeygarcia and @AndreBerto join the ‘Inside PBC Boxing’ crew to discuss. pic.twitter.com/eHM6jogxHh

Spence will want a favorable deal for Crawford fight

Arum will need to meet Spence’s asking price for a unification fight against Crawford, because he doesn’t need him. Spence has enough guys with PBC to last him the remainder of his career. Crawford isn’t in a similar position with Top Rank. After Crawford defends his WBO title against Egidijus Kavaliauskas on December 14th, he’ll be stuck fighting the likes of Luis Collazo. That’s not exactly an earth shattering fight for the boxing public. It’s more of the same type of match-making we’ve seen from Top Rank in the past. Given the bleak future outlook for Crawford in terms of opposition, he could make things easier if he agrees to the small slice of the pie against Spence.