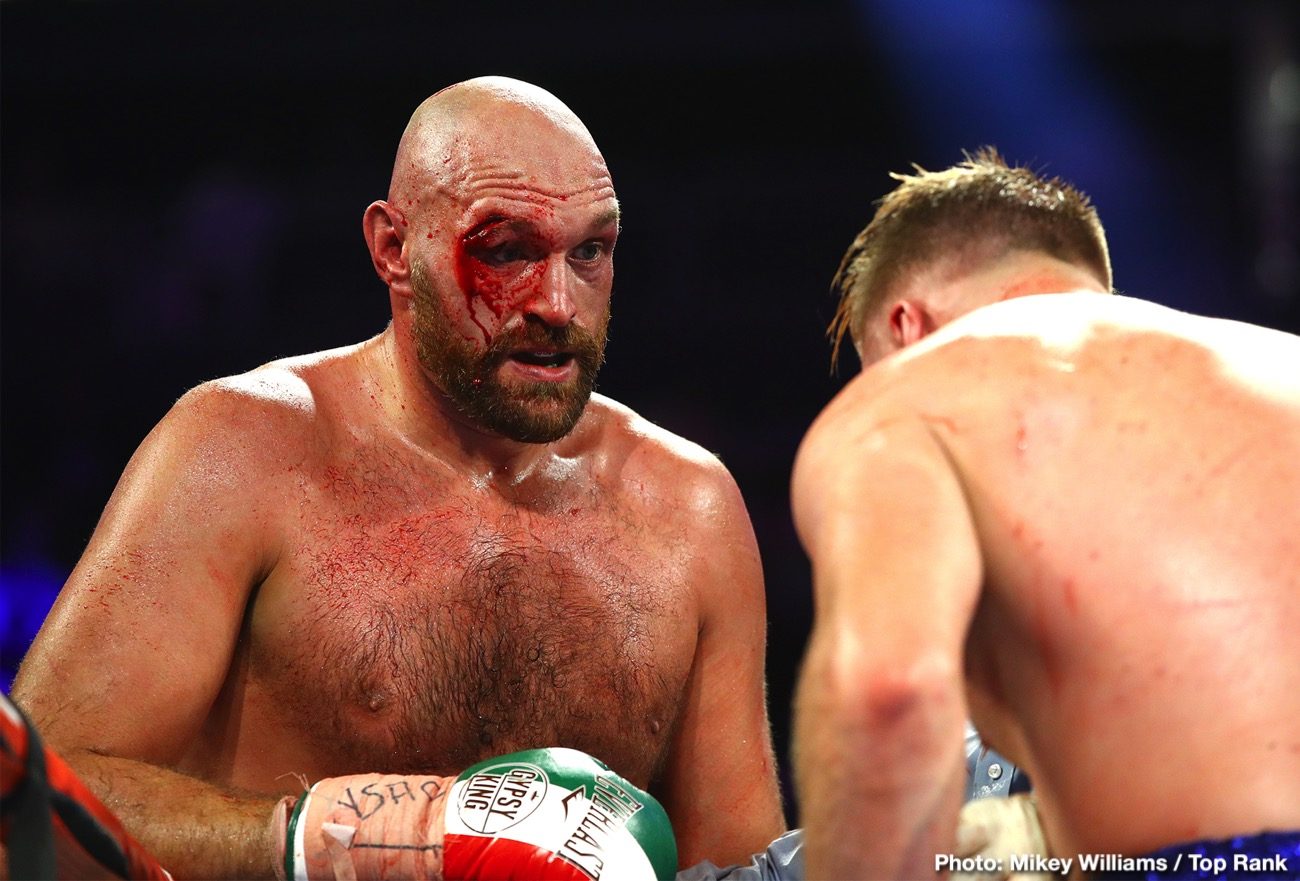 By Chris Williams: Top Rank promoter Bob Arum says the badly cut Tyson Fury will be restricted from sparring for seven weeks before he can start that part of his training for his rematch with WBC heavyweight champion Deontay Wilder on February 22, according to Lance Pugmire. For Fury to start sparring in seven weeks, it would be a huge risk, given how badly he was cut. In Fury follows Arum’s advise, he might end up having cut reopened.

Despite Fury (29-0-1, 20 KOs) suffering a massive cut over his right eye last Saturday night against tune-up opponent Otto Wallin (20-1, 13 KOs), Arum still plans on having the Gypsy King face Wilder on their previously scheduled February 22 date. The logical thing for Arum to do is to postpone the Wilder rematch until late 2020.

By that time, Fury’s right eye should be healed enough for him to return to the ring. There’s a chance that Fury’s eye will be a problem for him no matter how long he let’s it heal. But it doesn’t make sense for him to face Wilder on February 22.

Fury’s cut required an absurd amount of stitches to close up. In total, 47 stitches were sewn into Fury’s right eyelid to close to gaping wound that he suffered at the hands of the Swedish southpaw Wallin last Saturday night at the T-Mobile Arena in Las Vegas, Nevada.

Bob Arum tells me @Tyson_Fury will be restricted from sparring for seven weeks due to his cuts, but he can then resume normal training and it’s all systems go toward the planned Feb. 22 fight against @BronzeBomber

It’s clear that Fury, 31, got a lot more than he bargained for in taking on the young 6’6″ Wallin. He was blasting him with left hands all night long. Fury was hit more by Wallin than he’d ever been hit before.

“I think any other country in the world, they would have stopped the fight,” said Matchroom Boxing promoter Eddie Hearn to Sky Sports News. “He didn’t perform at his best, but he had the injury as well, and I think you’ll see him perform a lot better against the likes of Wilder. I don’t know how long he’s going to be out for. And I don’t think he’ll be ready for his February fight, but I don’t think Wilder will be ready for the February fight either. So it might work in their favor. I expect a different Tyson Fury against Wilder, if that rematch gets made.”

What Hearn is saying about how Fury would have lost in any other country is he’s talking about the fight being stopped due to his cut. For some reason, the ringside doctor let Fury fight with a bad cut from the third round on.