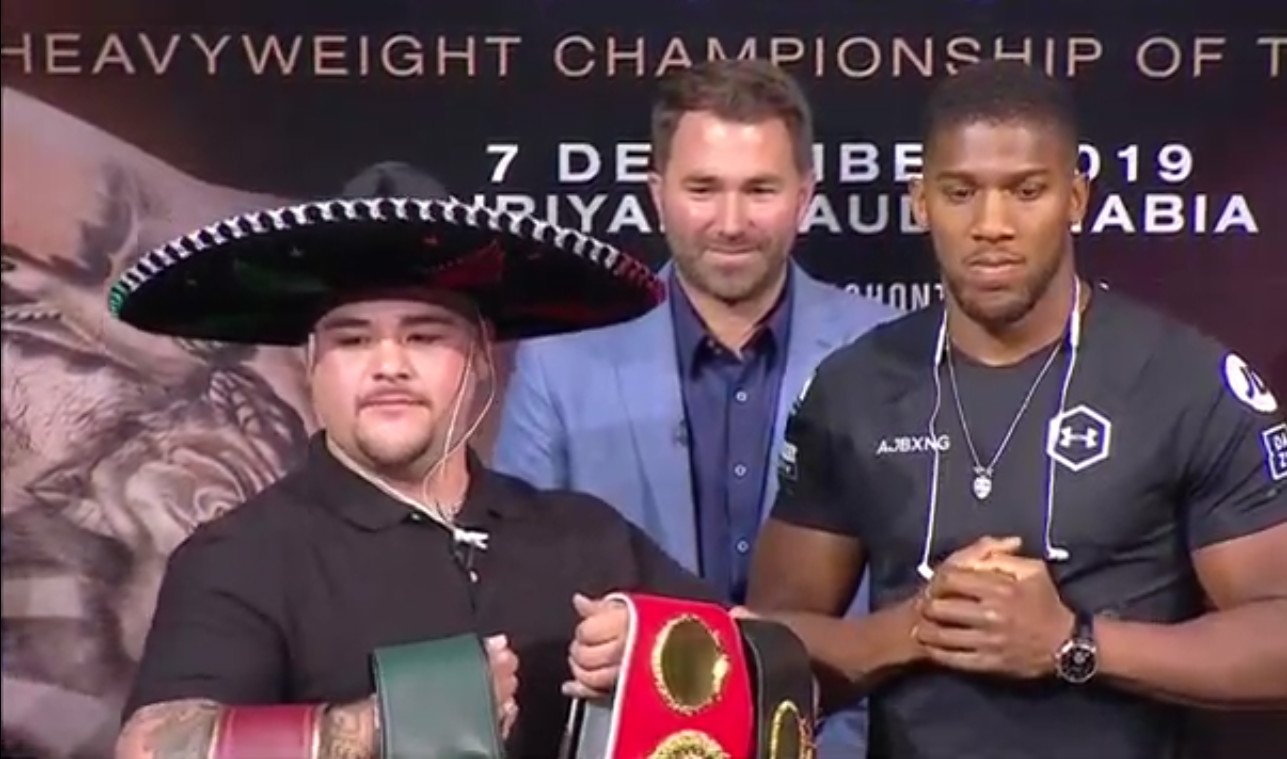 By Barry Holbrook: Anthony Joshua and Andy Ruiz Jr. met up for their second of three news conferences on Thursday in New York to promote their December 7 rematch in Saudi Arabia. Joshua (22-1, 21 KOs) told Ruiz (33-1, 22 KOs), “I’ve got my second chance.” The two fighters were back in New York.

This is where everything fell apart of Big Joshua last June when he was knocked out in the 7th round by Ruiz at Madison Square Garden. Joshua had come to takeover America, and win over the millions of boxing fans in the country. It didn’t work out well for Joshua, given that he had punch resistance, and equally poor stamina. Ruiz showed that Joshua wasn’t cut out for a fast pace style of fighting. Joshua’s bodybuilding physique didn’t help him against Ruiz, whose chubby body was more capable of fighting during sustained action.

Will we see more of this at tomorrow’s London press conference? 🤔 pic.twitter.com/TO4JW6Ykzm

No smiles from Joshua – again

There was no smiles from Joshua today for his face off with Ruiz. This was similar to how Joshua played it on Wednesday for the kickoff press conference in Saudi Arabia. The only difference was that Joshua looked a lot more menacing, as if he was trying hard to intimidate Ruiz. That proved to be futile, since Ruiz has been around the block many times. He’s not someone that is frightened by mean looks, especially against a fighter he knocked out easily. For all intents and purposes, Joshua was no more competitive than Ruiz’s previous opponent Alexander Dimitrenko. Joshua lasted a little longer than Dimitrenko, but that was only because Ruiz didn’t press the issue after he had him down twice in the 3rd round.

Ruiz Jr. reminds Joshua about his downfall in New York

“New York is where everything happened, where I made history,” said Ruiz Jr. during Thursday’s press conference in New York. “I know how it feels to lose, he could bounce back. My job is for him not to win. I’ve been through so many roller-coasters, people saying I can’t do it because of my physicality. I believe we get the same result on December 7,” said Ruiz Jr.

It’s going to require a special performance from the 29-year-old Joshua to come out on top in the rematch, because Ruiz has his number. It didn’t work last time for Joshua to try and control the fight on the outside, because Ruiz walked him down and pummeled him in close. Joshua’s shots weren’t enough to keep the 6’2″ Ruiz from getting in punching range to light him up.

Andy Ruiz says going to be the “same result”

Ruiz saying the rematch going to be the “same result” as last time is an ominous message, because he sounds so confident. He knows exactly how to beat Joshua now, and he’s not going to waste time like in the first fight.

While Joshua does have an excellent jab, it’s not powerful enough to keep a determined fighter off of him. Joshua has been able to keep the timid, limited fighters off of him with his jab, but couldn’t do it against Ruiz. He was clearly a cut above everyone that Joshua has faced during his pro career, including Wladimir Klitschko, and Dillian Whyte. Wladimir was a good fighter when he was younger, and he had Emanuel Steward as his trainer.  After Steward passed away in 2012, Klitschko was rudderless, and ineffective without his great coach in his corner to tell him what to do. Joshua wasn’t ready to fight a talented guy in his prime like Ruiz, and that’s why everything fell apart for him on June 1.

Joshua: “I have a second chance”

“I wouldn’t say I’ve seen it all yet but I’ve seen a lot. Stopping isn’t in my DNA,” said Joshua during Thursday’s news conference. “People reflect and say you lost the titles, I always say to lose something is to never get it back. I’m certain I have a second chance December 7, no warm-up fights, I’m not gun-shy. Shannon Briggs can I get a ‘Let’s go champ!”

It’s good that Joshua is getting a second chance, but that could be another chance to fail. If Joshua doesn’t learn from the mistake he made last time he fought Ruiz, he’ll surely suffer the same fate. Ruiz knows how to knock Joshua out, and he’s going to be right at him from the start. It’s going to be difficult for Joshua to try and keep Ruiz off of him. The crowd will likely be pro-Joshua, since he’s the better known of the two. Joshua’s loyal British boxing fans will be making the long trip from the UK to come see him, but this could work against him. Ruiz came to life each time Joshua’s fans roared support for him after he’d land a big shot last June. That’s not going to change for the rematch.

With Joshua’s powerhouse promoter Eddie Hearn backing him, he’ll be able to get an immediate trilogy fight against Ruiz if things don’t work out on December 7. Joshua’s philosophy is to keep trying to until he succeeds, which would be disastrous for his career. What gives Joshua the freedom to take what some feel is a foolhardy risk is the fact that he’s already made enough money to live a comfortable life. For fighters that needs to be calculated about the opponents they face, they can’t afford to take risks the way Joshua is, because they’re not set for life.

“We believed in ourselves. I believed Andy had the style to beat Joshua. I’ve been following Joshua since the 2009 world championships,” said Robles. “For me, he was the pound-for-pound best heavyweight champion. He’s a great fighter and I have nothing but the upmost respect for him. We will have more time to prepare this time. You’ll see a better, faster, slimmer Ruiz Jr,” said Robles.


« Jermaine Franklin vs. Pavel Sour on Oct.5 on Showtime

Ruiz: “I feel Joshua’s a little wrong in the head” »