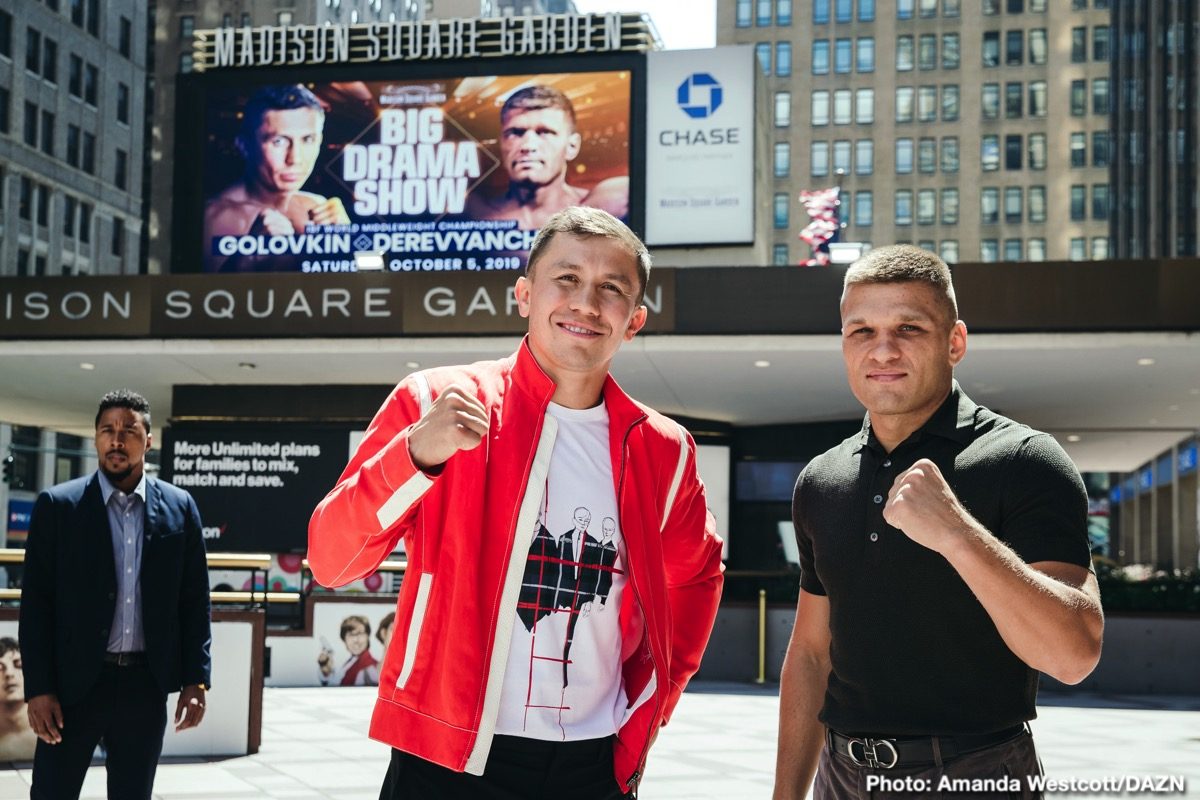 By Robert Addams: Gennady Golovkin will be fighting for the vacant IBF middleweight title against Sergiy Derevyanchenko LIVE on DAZN and Sky Sports. It’s a great deal for boxing fans in the UK to be able to see the Golovkin-Derevyanchenko fight on Sky. GGG is looking to go on a second title run at middleweight.

Golovkin (39-1-1, 35 KOs) is trying to win back one of his old titles after losing to Saul Canelo Alvarez by a 12 round decision a year ago in September 2018 in Las Vegas, Nevada. GGG, 37, will be facing 2008 Ukrainian Olympian Derevyanchenko (13-1, 10 KOs) on the 5th of October at Madison Square Garden in New York. Golovkin will be fighting in Derevyanchenko’s hometown in New York. Derevyanchenko lives in Brooklyn.

Golovkin looking to make a statement

The IBF 160-lb title was recently stripped from Canelo after he failed to defend the title in time against mandatory challenger Derevyanchenko. This gives Golovkin the opportunity to capture the IBF title by going up against a very tough opponent in Derevyanchenko. An impressive win for GGG could make a statement to Canelo, and the boxing world that he’s ready to reclaim his #1 status as the best middleweight in the division.

Golovkin came back from his loss to Canelo recently to crush Steve Rolls by a 4th round knockout in his debut on DAZN last June. That was GGG’s first fight with new trainer Johnathon Banks, and he showed a more aggressive style that involved combination punching. That was something that had been missing from his game.

Before signing on Banks as his trainer, Golovkin had always been the type of fighter that threw only punch at a time. This hurt him in his fights the counter-punching Canelo, as he’s done well during his career against fighters that throw one shot at a time.

“Gennadiy has the chance to become a two-time world middleweight champion and Derevyanchenko will be coming to spoil the party. Tune in and don’t miss it, but remember not to blink,” said Golovkin’s promoter Eddie Hearn to skysports.com.

Derevyanchenko lost for the first time last October in a close 12 round split decision defeat against Danny Jacobs for the vacant IBF middleweight title.  He showed a lot of skills, power and ring smarts in the loss.

“It’s the one that I would be up for. If they asked me for the fight, I would be up for the moon for it,” said WBO super middleweight champion Billy Joe Saunders to Fighthype about a fight between him and Golovkin in 2020. “Hopefully, one day yeah.”

🔥 @GGGBoxing bids to become a world middleweight champion again when he battles for the IBF belt on October 5th on Sky Sports 😄 pic.twitter.com/mP7cJnDpiB