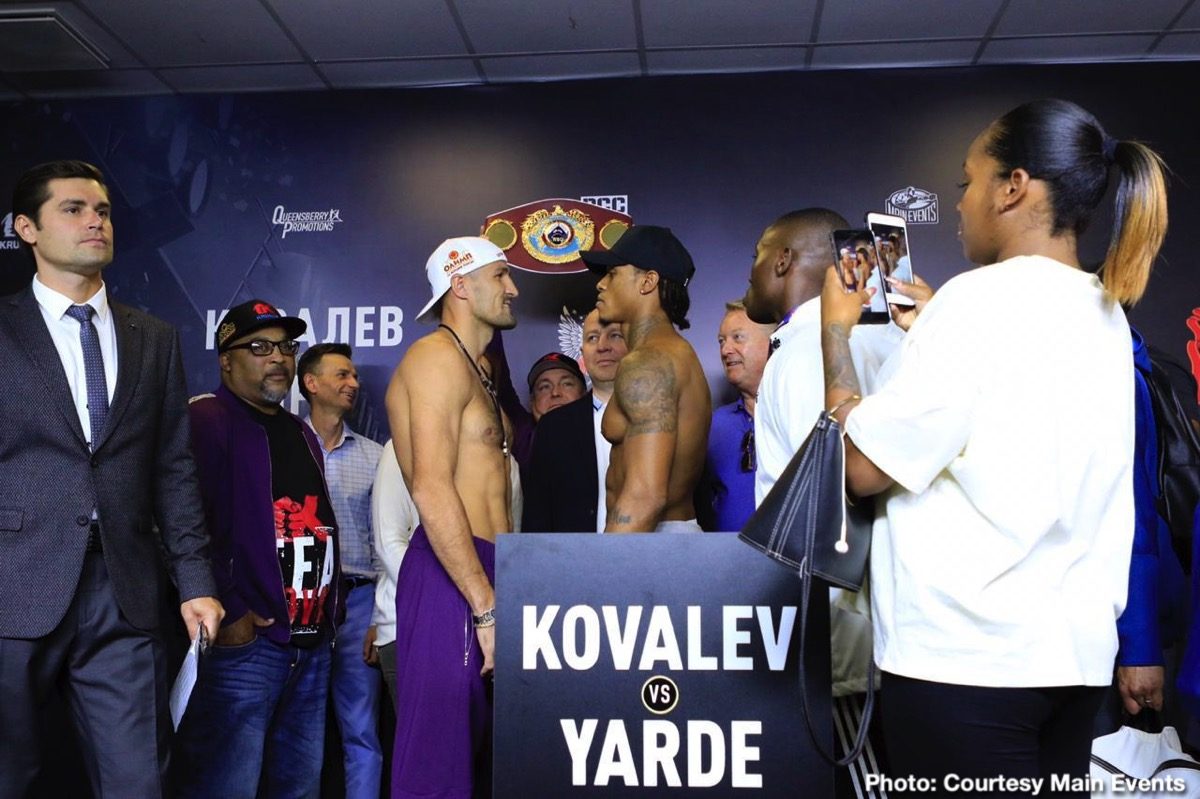 By Matt Lieberman: Promoter Frank Warren believes his fighter Anthony Yarde (18-0, 17 KOs) possesses the talent to upset WBO light heavyweight champion Sergey Kovalev (33-3-1, 28 KOs) this Saturday night in Russia. Although Yarde is viewed as the underdog by the odds-makers, Warren sees him as having a real chance to dethrone the 36-year-old Kovalev. A fight against superstar Saul Canelo Alvarez looms out there for the winner of the Kovalev-Yarde fight.

Yarde can put himself in position for Canelo fight

So far, only Kovalev has been mentioned as a possible opponent for Canelo, but that could change if Yarde beats him. Canelo will still want the WBO title, which means Yarde would be his likely next opponent. Kovalev was supposed to be making over $10 million for the Canelo fight. If Yarde wins, he could be the one getting that big payday against Canelo. It would be a dream come true for him. He would be hitting the jackpot just like Andy Ruiz Jr. did with his upset 7th round knockout win over Anthony Joshua on June 1.

The key to victory for Yarde is to get under Kovalev’s jab, and get inside on him to land big power shots, according to Warren. Yarde cannot let Kovalev stay outside to his jab, movement and boxing skills.

Kovalev vs. Yarde will be taking place at the Traktor Sport Palace, in Chelyabinsk, Russia. The fight will be shown on ESPN+ and BT Sport. There’s a surprising amount of interest in the fight that has come about this week. Before that, the casual boxing fans were lukewarm about the contest. One of the reasons for that is Yarde’s inexperience against high caliber opposition. Given the weak match-making that’s been done on Yarde’s behalf, it’s kept him from establishing himself as a big name.

Yarde turned down $1 million step aside fee for Canelo vs. Kovalev fight to take place

“It was easy to put together because Anthony is the mandatory challenger,” said Warren to BT Sport about the Kovalev fight. “They had to fight him. What they were trying to do originally was to get the fight in July here, but there was a problem. After that, there was the thing with Canelo.

They were tying to make the Canelo fight, but to Anthony’s credit, he was offered a million dollars to step aside and he refused to take it. He said, ‘I want to come here. I want to come to his backyard and fight him.’ He said he wanted the fight. That’s a big lump of money to turn down. A lot of people thought he was mad to do that.

He has so much confidence and belief in himself. That’s what he wants to do, and that’s why we’re here. He’s [Kovalev] got a lot of experience. He [Yarde] only had 12 amateur fights. He;s 19 now processional fights. Kovalev has had more professional fights in his whole career [than Yarde].

$1 million is a big chunk of change for Yarde to have turned down in order to step aside for the Canelo-Kovvalev fight. It makes sense though for Yarde to turn it down, because he might have gotten the Canelo fight if he won. If Canelo beats Kovalev, he’s expected to vacate the WBO light heavyweight title. That means Yarde would’t get the Canelo fight, and Kovalev’s reputation would be diminished. Yarde would gain nothing fighting Kovalev if loses to Canelo.

“For me, this fight is about, ‘is Kovalev an old man or is he going to old man him out of it’?” said Warren. “Is his experience going to get him through, and win him the fight against Anthony, who hasn’t fought at this level. We will find out on the night. The way to beat Kovalev, in my opinion, is you’ve got to to get inside his jab. He’s a good boxer, and you’ve got hit him. You’ve got to work his body, and you’ve got to work hard. If he can do that…he’s got the power, there’s no doubt about that. It’s the rest of it we’ll find out about tomorrow night. The head movement and so forth.

Every fight is a risk. When you talk about a guy that’s come from the background that he’s come from, as far as his experience is concerned, it’s always going to be a risk. But his confidence is unbelievable. I just hope overconfidence at the weigh-in earlier today; they were doing the face off. He wouldn’t blink, and he wasn’t moving away from him. He just really does fancy the job,” said Warren.

It makes a lot of sense what Warren says about Yarde needing to get inside the jab of Kovalev to win. While both guys are 6’0″, Kovalev is the better fighter on the outside, and he’ll dominate the fight if he’s able to keep it at range the entire night. Kovalev gets a lot of power on his longer shots, and Yarde’s chances of winning will go way down.

“You’ve got to remember that he’s been mandatory now for about 18 months at the #1 spot,” said Warren. “I stopped it from happening. The WBO was going to push it. I said please don’t push it yet. Let him [Kovalev] have another voluntary if he wants. I did’t think he [Yarde] was ready for it. we’re at a stage now where he’s either going to be ready for it or not. Even if he gets beaten, and I don’t think he will, even if he does get beat, he’s getting all that experience that he’s been lacking for this fight, and that will serve him in good stead.

He’s only going a young man, and he’s a tremendous athlete. I just feel he can pull this off. He put himself under pressure by coming here. And, he could have taken the million dollars, and stood aside. He just believed that it’s his moment, and that’s where he’s at. I’m not going to try and crush his dream. That’s what he wants. I think he can do it. I’ve been lucky over the years with the fights I’ve made. I hope that’s the case,” said Warren.

In theory, Yarde will gain a lot of experience fighting Kovalev, but it might not be a positive for him. If it turns out to be such a mismatch, then it could potentially ruin Yarde’s career. As long as Yarde is competitive, looks good, and is able to learn from the fight, it be helpful. On the downside, if Kovalev administers a beating, it could ruin Yarde’s career. That’s why it’s important that fighters have the proper experience needed before they step up. Yarde’s toughest fight today is match against 35-year-old journeyman Tony Averlant last year. Yarde took punishment from Averlant (27-11-2, 5 KOs) in the early rounds, and was hurt by him. In the seventh round, Yarde stopped him, but it was from an impressive performance.

Yarde needs to let his hands go to beat Kovalev

“He [Kovalev] didn’t look good against [Eleider] Alvarez, and I picked Alvarez to beat him, and he did beat him,” said Warren. “The second time, I thought Alvarez would beat him again, but he didn’t. He went out and boxed him, and it was a different fight. That was about boxing. That was about all the experience he’s got. Now Anthony has got to make sure he doesn’t allow that to happen. When he gets in there, he’s got to absolutely make it his fight. He’s got to try and dictate that fight.

He’s got to get under that jab. And, he’s got to keep working, and be fast. He can’t afford to be on the outside letting him control the fight with his jab. He’s got to let his hands go with plenty of head movement. If he can do it, he can pull it off. If he wins, this will be the biggest turn-up in boxing abroad. All those guys over the years, Don Curry and Lloyd Honeyman, if you think that they all came from vast amateur backgrounds, and had tremendous experience,” said Warren.

In Kovalev’s losses to Andre Ward and Eleider Alvarez, they weren’t because of activity. In Ward’s case, he wrestled Kovalev with clinching to tire him out, and won a controversial decision in their first fight. Ward won the rematch after hitting Kovalev with low blows. Alvarez fought tentatively until hurting Kovalev in round seven. Once Kovalev was hurt, Alvarez finished him off in dropping him three times.

“If he does it, it’s huge. For Anthony, it’s about making him an old man,” said Warren.  “Don’t let the old man old man you. Don’t let him use his experience. He’s got to make him feel that he’s old. Early in the fight, he’s got to jump on him. He’s got to have a really good work rate. He’s got to force him. Hopefully, he comes off. They’re both big punchers. This is going to be exciting. Whatever happens, it’s going to be an exciting fight for however it lasts. It might be short and sweet.

It’s going to be an exciting fight. When those two land bombs, someone is going to go. I hope it’s on his mind. I hope he’s overlooking the fight,” said warren about Kovalev potentially facing Saul Canelo Alvarez next in November if he beats Yarde on Saturday. “There’s two ways of looking at it; He can be overlooking it, and that’s great. Let’s get this fellow out of the way, and get a few quid or that might be something that spurts him on. You never know, do you? Who knows? If our man [Yarde] comes through, let’s see if Canelo has got the balls to come to him,” said Warren.