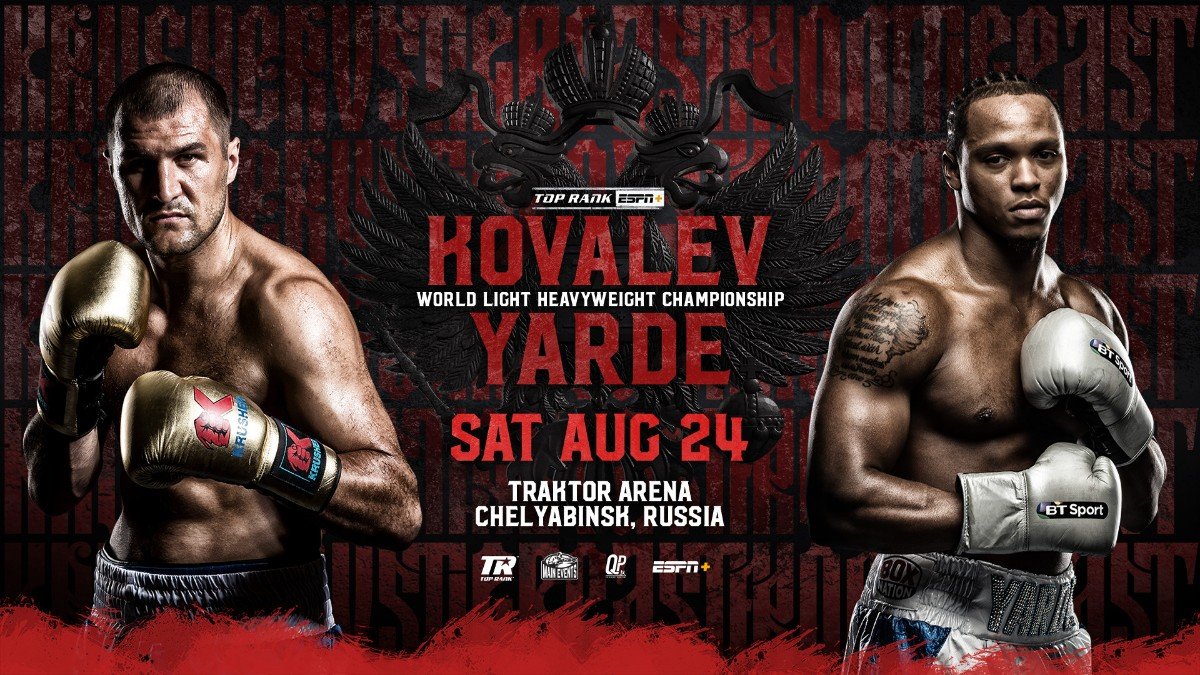 By Mark Eisner: Sergey Kovalev found himself in the fight of his life against young upstart Anthony Yarde, and he barely survived an eighth round scare to come back and stop him in the 11th round in Chelyabinsk, Russia. There were were moments in the eighth round where it looked like the 36-year-old Russian Kovalev wouldn’t make it through, but he somehow weathered a storm of shots from Yarde.

Kovalev came back to stop Yarde in the 11th round with a jolting left jab that the British fighter walked into. The power of the shot was magnified due to Yarde coming forward, and not expecting it. Moments earlier, Yarde had knocked Kovalev back with a hard shot, and he was expecting him to fire off a hard jab.

Yarde and his promoter Frank Warren have to be disappointed, because they came so close to victory. A win for Yarde would have put him in position to defend the WBO light heavyweight title against Mexico superstar Saul Canelo Alvarez in November.

Fight could have been stopped in eighth after Yarde hurt Kovalev

Yarde (18-1, 17 KOs) landed a big right hand that caught Kovalev in the back of the head in the 8th, causing him to wobble. Yarde then landed a number of hard shots had Kovalev (34-3-1, 29 KO) staggering around the ring like a drunk. It’s hard to know what kept Kovalev on his feet, because he took some horrendous shots that would have knocked anyone out.

Yarde was landing with full force with every punch. These weren’t glancing blows. They were punches that he was putting everything into, and Kovalev took them despite staggering from every shot. One can argue that the referee should have waived the fight off in the eighth round, because Kovalev was getting battered.

“You’re a great fighter. You have a great future, believe me. You’re good, you’re really good,” said Kovalev to Yarde after the fight.

It was the type of performance that Yarde and his promoter Frank Warren can feel good about, because he showed that was able to compete at a high level. Yarde could have won the fight, especially if he’d followed Warren’s advice to attack Kovalev’s body from the start. He made the mistake of waiting until the eighth round before he attacked his body.

Warren: Yarde was seconds away from stopping Kovalev

“In the eighth round, I really did think he was seconds away from victory,” said Warren to IFL TV. “He put terrific effort into that [round], exerting himself beyond any measure, and it just didn’t happen. Kovalev is a champion, a very experienced man, and he had the experience to get through the fight. In the last round, he was going to put him out or not. It didn’t happen, and unfortunately he got caught. The tiredness set in, and he certainly done himself and Britain proud. There’s no doubt about that. It was one of those things.

He was the mandatory. Do you take it or do you give him a couple of more fights, and it was a bit of both really. He really had him, but he didn’t quite. He was all over the place, wasn’t he?” said Warren in referring to Kovalev. “What I’ve been saying about working the body, and getting him to drop his hands. He [Yarde] didn’t really get into that until that round [eighth], and when he did get into it, he was hurting him. If he had done that a little bit earlier, it would have been a different thing. I’m very proud of him, and he can certainly come again,” said Warren.

It was a superman effort from Kovalev to make it out of the eighth round after getting hurt. How he made it out of the round is unclear, but he took some shots from Yarde that should have knocked him out. The referee Luis Pabon ave Kovalev the benefit of the doubt in the eighth, but the should have been waived off. Kovalev was that hurt.

Yarde hurt Kovalev with body shots in round eight

“He did in the eighth round [get under Kovalev’s jab],” said Warren. A fighter’s best weapon is their jab. Every good punch comes off a jab, and he had to negate that. The only way to go that is to get inside, and if you’re inside, you throw shots to the body and slow him down. Eventually he [Yarde] did that. He’s a class act, Kovalev. He had to suck up tonight. If that fight had been in England, maybe he would not have. The fact that it was here in front of all of his fans, that spurred him on a little bit, and lifted him up a little bit when he was looking a little bit like on the edge of being stopped. That’s the thing about having home advantage.

But I did have a feeling that Anthony was capable of doing it. I did have a look at quite a lot of Kovalev over the last 18 months, and what I saw of him, I really did feel that he was there to be done. With a little bit of experience, we would have gotten him out of there tonight. You’ve got to take your hat off to him [Yarde], because he will come again. He’ll learn from that,” said Warren.

In hindsight, Yarde has to be a little aggrieved that he didn’t start throwing body shots earlier in the fight. He waited until the eighth round to attack Kovalev’s body, and he let a lot of time go by. After hurting Kovalev in the eighth, Yarde didn’t follow up with additional body shots in rounds 9 through 11. He went away from attacking Kovalev’s body, and this let the Russian fighter off the hook.

“It was a good pace. After the first couple of rounds, he fought at a fast pace,” said Warren. “To be in the other guy’s backyard says a lot about his character, and says a lot about Anthony Yarde. If he’d gotten stopped in the eighth, we’d all have been geniuses. That’s how it was. He [Kovalev] was that far away from being stopped. That’s the sport you’re in. We held the #1 mandatory position for 18 months. And we could have done it then, but I didn’t want it then. We looked and thought about it, and after the last fight, that was it. He wanted it, and it was his choice. It was my choice to go with it, because I believed in him. He nearly pulled it off.

It’s one of the bravest performances I’ve seen from a British fighter abroad. It’s not back to the drawing board. He’s at this level. He deserves to be at this level, and he’ll learn from that fight. If he doesn’t learn from it, then that’s a problem. He’s a smart guy, Anthony. His trainer has done a good job with him, and that’s what he’ll do now. He has to look at the fight, and study it. And he must rest up a bit, and the we’re getting back on the road. He was hurting him [Kovalev]. He was killing him underneath. And, he was killing him to the body. That, to me, was the key to winning the fight, getting underneath and throwing to the body. He [Yarde] eventually started throwing the shots [to Kovalev’s body in the eighth],” said Warren.

If Kovalev gets passed Canelo Alvarez in November, it would be interesting to see a rematch between Yarde and the Russian fighter.

“It is what it is. You can’t change it,” said Warren. “And, you can look at it all day long, and think of things you would have done differently. You deal with the reality of the situation. What’s going to happen now is he’s going to come back strong and learn from it. So close and so far. What a performance it would have been. If that eighth round [had seen Yarde scoring a knockout], what that would mean. It would have been something else,” said Warren.

A lot of boxing fans would be interested in seeing those two battle it out again. If Yarde can improve upon the mistakes he made tonight, he can avenge the loss in a rematch.

Anthony Yarde is so refreshing and honest…

He’ll take this defeat on the chin and come back stronger 👊 #KovalevYarde pic.twitter.com/n3UYDXPLNH