Ruiz says Joshua will run in the rematch 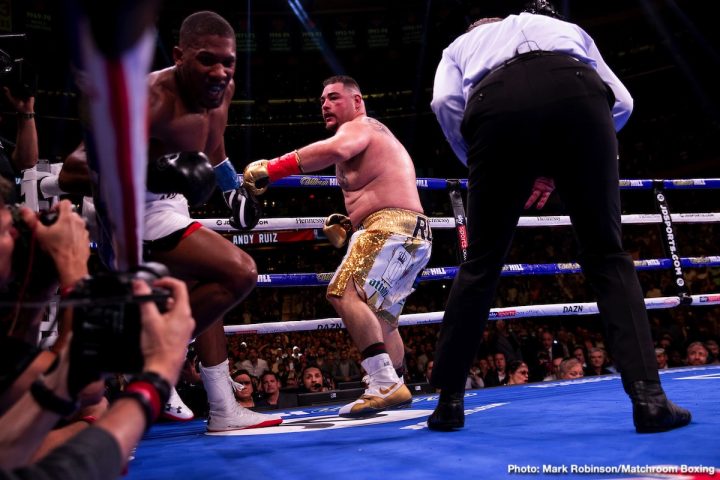 By Kenneth Friedman: Andy Ruiz Jr. says he still hasn’t signed anything for the rematch with Anthony Joshua, and he’s waiting for his management to put together the best deal possible for him. Ruiz wants to prove to the world that his seventh round knockout win over Joshua (22-1, 21 KOs) wasn’t a fluke thing on June 1. Andy has a chance to prove that he’s the better fighter as long as he goes through with the fight.

Ruiz hasn’t given up on the idea of the rematch with Joshua taking place in the United States despite AJ’s promoter Eddie Hearn prematurely announcing the fight for Saudi Arabia. That’s not where Ruiz wants it. He’s looking at the fight taking place in New York, which is where he beat Joshua last June. Ruiz likes that location. However, it’s unclear whether Hearn has already signed a contract to have Joshua fight in Saudi Arabia.

Ruiz: Joshua will run but he’s too big

“I think he will want to run a little longer, and move. But he is too big, he has a lot of muscles and it will be very difficult for him,” said Ruiz Jr. to ESPN Deportes. “I have not signed anything yet. We are negotiating everything. The fight they want to do there (in Saudi Arabia), but we have to see where we negotiate with my team. I would like in New York again, where I won. I’ll give him a chance to try to beat me, and if he wants the belts, then he has to do it there, “said Ruiz.

It appears that’s what the case is. Ruiz reportedly wants his demands met for him to agree to fight in Saudi Arabia. He’s not saying what those demands are, but it’s a good guess that he wants his $9 million purse to be bumped up to where he’s getting near parity with what Joshua is making.

Ruiz Jr. (33-1, 22 KOs) expects to beat Joshua again, and retain his IBF, WBA and WBO heavyweight titles. He expects to see a different Joshua than in their first fight in New York, as he thinks that he’s going to run as much as he can, but he doubts he’ll be able to. Joshua has too much muscle for him to run a lot, according to Ruiz.

Ruiz wants to prove his win over Joshua wasn’t luck

“I must have the hunger, the faith, the desire to win and show people that it was not a stroke of luck,” said Ruiz about his rematch with Joshua. “We worked hard. I got knocked down, but I got up like a warrior, and I knocked him down not once but three times. You have to be prepared,” said Ruiz.

A lot of Joshua’s boxing fans are highly critical of Ruiz fight now, saying he’s not honoring the rematch clause that he signed in order to get the fight with Joshua on June 1. They feel that Ruiz needs to be a man of his word and stick with the agreement that he signed for the first fight with Joshua, even if that means that he’ll wind up potentially with an embarrassingly poor split.

Ruiz’s fans point out that as the champion, he should be getting a better split than 80-20 or 90-10, whatever it comes out for the rematch. He may not get the kind of split that he deserves as the IBF/WBA/WBO champion, but if Ruiz wins the fight, then he can move on and command a better split against his future opponents while he holds the three belts.

A second win for Ruiz probably means he won’t ever get a third fight with Joshua, and that’s the unfortunate thing. If there was hope that Ruiz could get a better split with Joshua for a third fight, then it wouldn’t be as big a deal for him to accept the much smaller money this time. But this will probably be the end of the Joshua rivalry for Ruiz if he knocks him out again. Hearn won’t want Ruiz to fight Joshua again if he beats him a second time, because it would be career disaster for AJ if he faces Ruiz a third time after losing the first two fights.