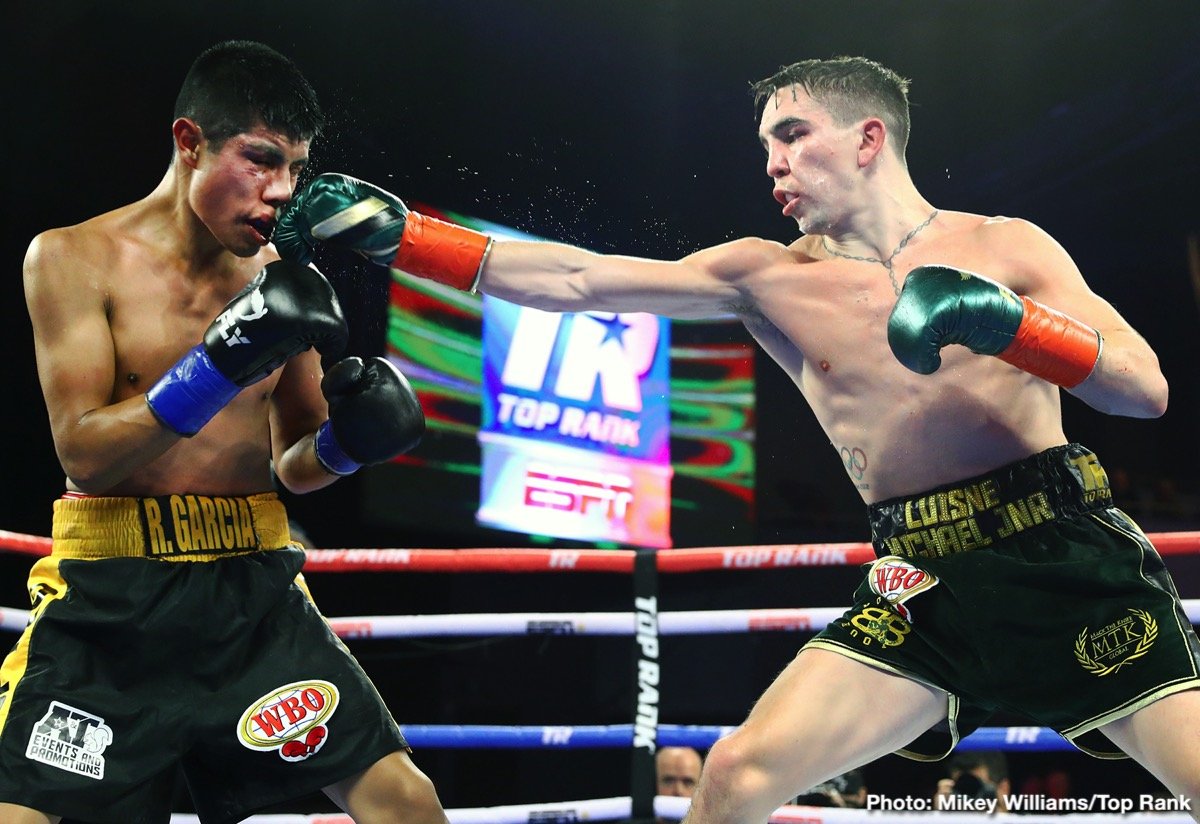 By Doug Berman: Two-time Irish Olympian Michael Conlan (12-0, 7 KOs) will be coming down in weight from 126 to fight at 122 for a fight against Isaac Dogboe (20-2, 14 KOs) on December 14 at Madison Square Garden in New York. There’s also a chance that Conlan, 27, could face former featherweight world title challenger Genesis Servania (32-2, 15 KOs) on December 7th.

Whoever Conlan winds up facing on December 7, he’ll be fighting on the undercard of WBO welterweight champion Terence Crawford vs.Egidijus Kavaliauskas on ESPN. The card already has IBF lightweight champion Richard Commey defending against Teofimo Lopez as the likely co-feature bout. Bu Top Rank Boxing is looking to beef up the card by adding an additional fight, and that’s where Conlan comes in.

Conlan could struggle against Dogboe or Servania

This is a gamble on Conlan and Top Rank’s part for him to move down to 122, because he’ll have a tough time against Dogboe or Servania. What Top Rank might be counting on in having Conlan face the 5’2″ Dogboe is for him to use size advantage. The 5’8″ Conlan would have a massive height, and reach advantage over Dogboe. That might be enough for him to win, but it would still be tough for Conlan. Former WBO super bantamweight champion Dogboe, 24, lost his title to knockout artist Emanuel Navarrete (28-1, 24 KOs) last December in losing a 12 round unanimous decision.

In their rematch on May 11, Navarrete stopped Dogboe in the 12th round. Conlan would be getting Dogboe at the perfect time for him to beat him, but it won’t be easy. Dogboe is real warrior, and he won’t give up. It’ll be a war of attrition. The management for Dogboe would be doing him no favors in putting him in with Conlan right now, because he’s had three hard fights against Navarrete and Jessie Magdaleno.

⚖️ Michael Conlan is reportedly planning to move down to super-bantamweight and may fight Isaac Dogboe or Genesis Servania in his next bout, which will be on the same show as Crawford vs Kavaliauskas & Commey vs Lopez, December 14th at MSG in New York. [According to @ESPN]

Conlan could go after WBO 122-b title after Navarrete vacates

It’s clear that Conlan is being positioned to try and snatch the World Boxing Organization super bantamweight title once Navarrete vacates, and moves up to 126. Conlan stands a better chance of winning the vacant WBO title at 122 than he would in fighting Shakur Stevenson for the vacant WBO 126-lb strap.

Once Navarrete moves up to 126, it’s clear sailing for Conlan to win the WBO belt, and hold onto it for a while. The WBO’s top 15 rankings at super bantamweight is poor. A fighter like Conlan would have an excellent chance of winning the vacant WBO belt, and defending it successfully repeatedly. As long as Conlan doesn’t attempt unify the WBO 122-lb title against the other champions, he’ll be alright. Conlan has it pretty easy since turning pro in 2017. He’s not had to face anyone too talented, and he’s looked good. He does have a bad habit of fighting with his hands down, but no one has taken advantage of it.