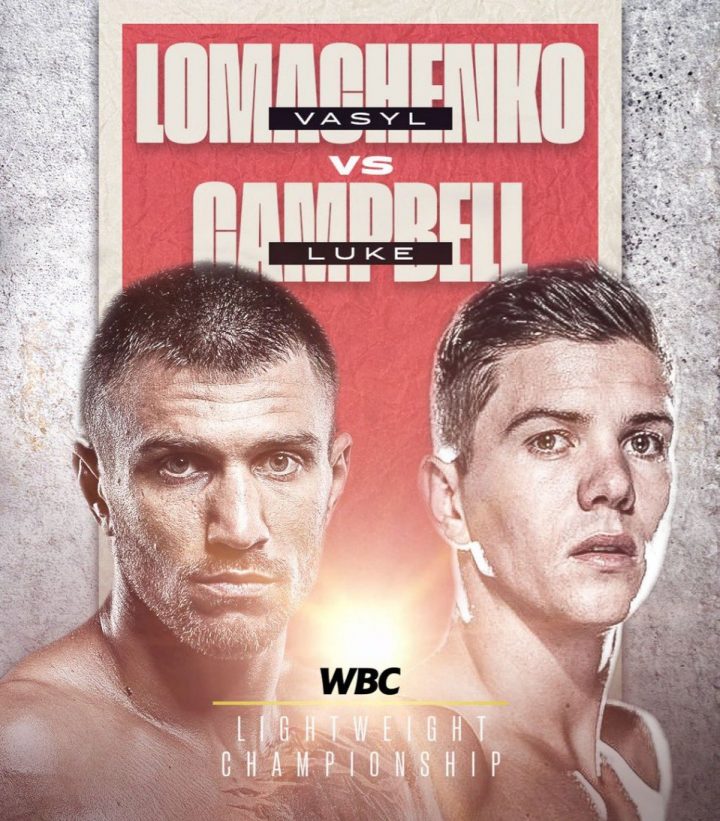 By Dean Flessel:  Two-time Olympic gold medalist Vasiliy Lomachenko and the UK’s Luke Campbell both weighed in this week for their 30-day weight check for their fight on August 31 on Sky Sports Box Office at the O2 Arena in London, England. The Lomachenko-Campbell fight will be shown on ESPN in the United States.

Lomachenko (13-1, 10 KOs) and the 31-year-old Campbell will be fighting for the vacant World Boxing Council lightweight title.

2012 Olympic gold medalist Campbell (20-2, 16 KOs) weighed in at 147.4 pounds, and looked a little haggard, as if he’d dropped a bit of weight to get down to 147.  Campbell is facing by far his toughest opponent of his six-year pro career. Luke has lost in the past to Jorge Linares and Yvon Mendy. Both contests were close ones, but clear defeats. Campbell and his promoter Eddie Hearn didn’t agree with the scoring for his 12 round split decision loss to Linares in 2017 in Inglewood, California.

It was a fight that could have gone Campbell’s way if it had taken place in the UK rather than the U.S, but Linares isn’t from the United States. The judges didn’t show Linares favoritism. It looked to them, and a lot of boxing fans that he’d out-fought Campbell in the first four, and last four rounds of the contest.

Campbell: “This is my time”

“Anyone that goes up against Lomachenko is going to be an underdog,” said Campbell to Sky Sports News. “That doesn’t bother me. I believe I’ll win this fight. This is a 12 round fight. I believe timing is everything. I’m confident. I’m physically better than I’ve ever been. This is my time now. Whatever mistakes I’m making now, I’ve got to correct them. I need to be the best I can be on the night. It’s not what he can do, and what he’s got. It’s about what I can do. This is my opportunity to show everybody how good I am. Styles make fights, and I believe [Anthony] Crolla’s style o fighting was made for Lomachenko.

I’m going up against a guy that’s ranked pound-for-pound in the world. Everybody is talking about the height difference and the reach. I’m not relying on that one bit to win this fight. I’ve got a lot of other tools as well. He’s such a great fighter that height and reach won’t make a massive difference. But we’re both bringing a lot to the table. We’re the two best in the division. You use your attributes, and what you’re good at, and you work to your strengths. I only see this fight in my mind one way, and that’s me winning. They’ll be no regrets on my side. I’ve been training as hard as I’ve ever trained,” said Campbell.

The 31-year-old Lomachenko weighed in at 144.5 pounds, and looked in great shape.

His weight is high enough for him to feasibly campaign as a welterweight, as he weighs close to the same amount as WBA Super Welterweight 147 pound world champion Manny Pacquiao. However, Loma hasn’t shown a great desire in moving up to welterweight to take on the eight division world champion Pacquiao (62-7-2, 39 KOs).

The speed and power that Pacquiao possesses would likely too much for the lighter hitting Lomachenko to handle. He’s made it clear that he doesn’t want to move up beyond the lightweight division to tackle the harder punchers at 140 and 147. After the tough time Lomachenko had against Jorge Linares and Jose Pedraza, it’s perhaps for the best that he stays at lightweight, because it’s a weight class that he has a better shot at excelling in.