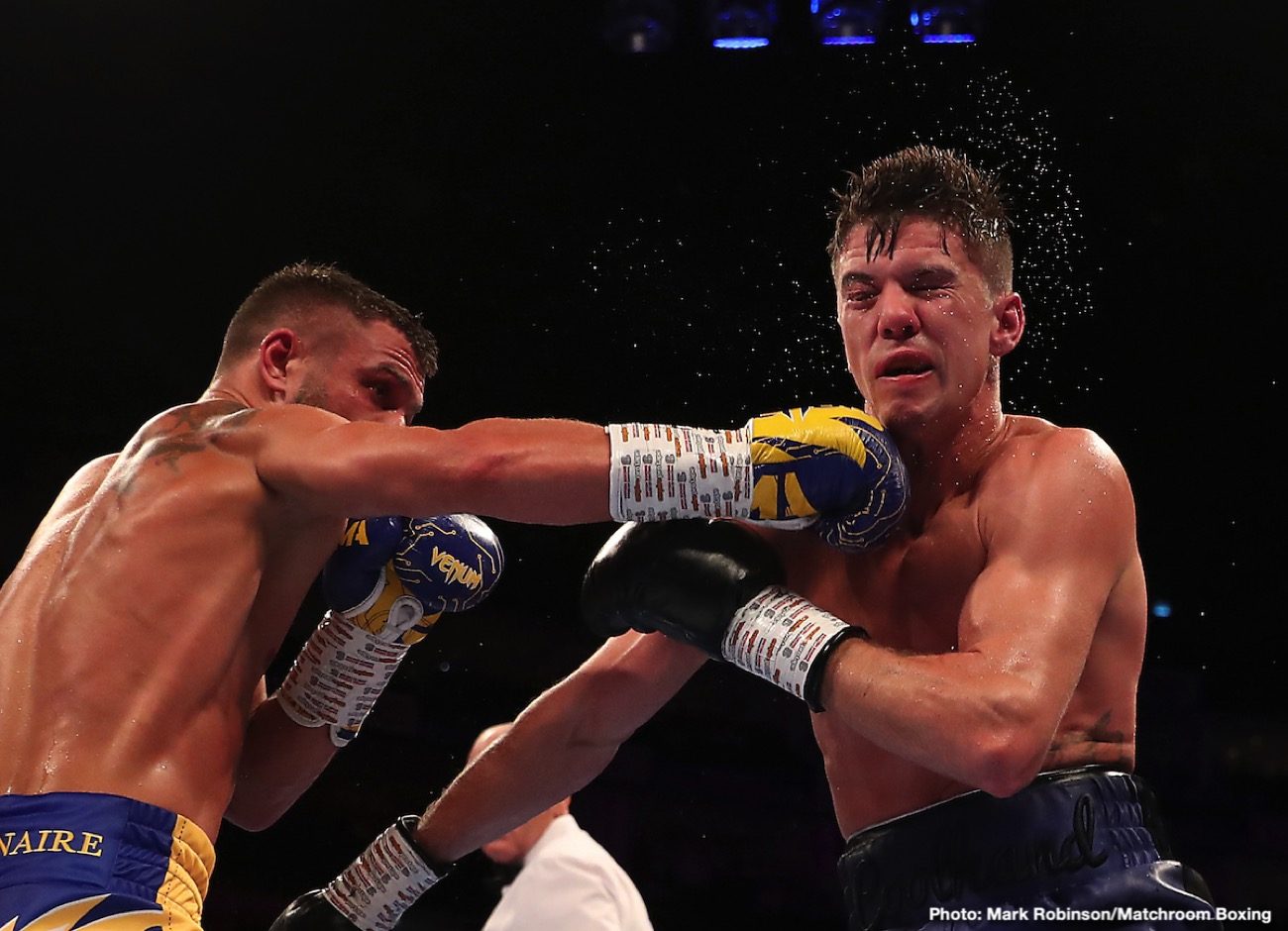 By Robert Adams: In a highly competitive fight, WBA/WBO lightweight champion Vasiliy Lomachenko (14-1, 10 KOs) defeated Luke Campbell (20-3, 16 KOs) by a 12 round unanimous decision to capture the vacant WBC 135-lb title on Saturday night at the O2 Arena in London, England. Both fighters were hurt numerous times in the fight. The size and the power of Campbell gave Lomachenko a lot of problems tonight.

Campbell’s body punching kept him in the fight

Lomachenko was bothered by the body punching from Campbell, and he never got accustomed to it. All the head movement that Lomachenko used proved to be useless, as Campbell focused his shots to the body. If Campbell had been land a few more body shots in the fight, he might have pulled off the upset.

Campbell was hurting Lomachenko with those shots. The power that Campbell was able to generate to the body was impressive. Before this fight, Campbell wasn’t known for being a good body puncher. He really opened up the eyes of the fans tonight.

“Of course I’m happy,” said Lomachenko after the fight. “Next, IBF. That is my title…I want to fight for the IBF title, but it depends on Bob Arum.”

Campbell, 31, showed that Lomachenko is getting older, and he’s not going to stay on top for too much longer. Lomachenko could be facing the winner of the Richard Commey vs. Teofimo Lopez fight next. Lomachenko is in a good position to unify the lightweight division against the winner of that fight, but those aren’t super talents. Lomachenko’s fight tonight was clearly the toughest match that he’ll get in this weight class. He’s not going to stick around to fight the young Devin Haney.

Lomachenko’s promoter Bob Arum has compared him recently to a young Muhammad Ali, but he didn’t fight like that tonight. Loma looked vulnerable tonight in winning a tough fight.

“Obviously, we’re looking to win the fourth belt to unify the title,” said Arum about Lomachenko But Loma and Egis have told they can’t wait to come back to the UK to fight here again. Luke will be back. Loma is up there with Muhammad Ali, Marvin Hagler, Sugar Ray Leonard, Floyd Mayweather, Oscar De La Hoya, Manny Pacquiao. He belongs with those fighters. He will fight anyone at featherweight, super featherweight or lightweight,” said Arum.

With the victory tonight, Lomachenko captures the WBC lightweight belt, and now holds three of the four titles in the weight class. Lomachenko wants to win the IBF belt to round his collection, and then move back down to 130. He wants to challenge WBA super featherweight champion Gervonta ‘Tank’ Davis for his title. There’s mouth-watering fights for Lomachenko against Miguel Berchelt, Oscar Valdez and Tevin Farmer. Leo Santa Cruz is moving up to 130, and he’d be a great option for Loma to fight.

Hughie Fury (23-3, 13 KOs) fought his heart out tonight in the co-feature bout, but came up empty in losing to Alexander Povetkin (35-2, 24 KOs) by a 12 round unanimous decision in heavyweight action. Hughie, 24, fought the 39-year-old Povetkin to a standstill in the first half of the contest. The fight got away from the young Fury in the second half, as he gassed out. Former WBA champion Povetkin had too much power, and experience for Hughie.

The scores were 117-111, 117-111 and 117-111. Boxing News 24 had Povetkin winning 116-112. There were a lot of rounds that could have gone either way, but the judges were more impressed with Povetkin’s hard shots. Fury did a lot of clinching, moving and throwing rabbit punches. The combination of all those things didn’t endear him to the judges.

“I’m disappointed, I gave it my best but ultimately came away second best,” said Fury.

It’s understandable that Hughie would be upset with the outcome of the fight. It was a winnable one for him, but he wasn’t able to stand his ground against Povetkin in the closing rounds.

Where things went wrong for Hughie is he failed to throw the multiple combinations that his trainer Peter Fury had spoken about before the fight. It wasn’t until the 12th round that Hughie started throwing sustained combinations, and it was too late. He looked shockingly good when he let his hands go in the final round, but he failed to do that earlier.

“That was a great fight, it was really difficult,” said Povetkin. “My best regards to all my fans in Russia, we are the best.”

The win for Povetkin keeps his career alive for now. He couldn’t afford to lose to Hughie, because he’d been stopped in his last fight by Anthony Joshua 11 months ago. Povetkin will be turning 40 on Monday, and he’s too old to be getting beaten by younger fighters like Hughie.

Going into the 8th round, Hughie had a real chance of pulling off the upset. He was hitting Povetkin with beautiful jabs from the outside, and tying him in close. Povetkin looked frustrated in between round, as he didn’t know how to figure out Hughie. In rounds 9 through 12, Povetkin stepped up the pace, and increased his work rate.

Hughie was already topped out in terms of his stamina, and not ready for an increased effort from Povetkin. Instead of fighting back hard, Hughie repeatedly tied Povetkin up, and looked exhausted. All the clinching from Hughie in the last four rounds made it clear that he was too tired to let his hands go.

In rounds 8, 9 and 10, Povetkin hit Fury with shots that knocked him off balance. Although Fury wasn’t hurt by any of those punches, it looked bad, because he was getting knocked off balance with hard shots.

Charlie Edwards vs. Julio Cesar Martinez ends in no contest

WBC flyweight champion Charlie Edwards (15-1, 6 KOs) dodged a bullet with his fight against mandatory Julio Cesar Martinez (14-1, 11 KOs) ending in a third round no content. Moments after the hard hitting Martinez knocked Edwards down in the 3rd, he hit him with a body shot while he was still down. Edwards was too hurt to get back to his feet, and the fight was stopped.

Martinez was given credit for a knockout despite having clearly hit Edwards when he was down. The World Boxing Council then ruled it a no contest. As such, there will be a second fight taking place between Edwards and Martinez at a later date. However, it’ll depend on whether Edwards and his promoter Eddie Hearn want to make the rematch with Martinez.

Martinez too strong for Edwards

If Edwards decide to vacate the WBC 112-lb belt, then he doesn’t have to worry about fighting him again. The way that the fight played out, Martinez is too strong for Edwards. If they face each other again, there’s a good chance Edwards will lose.

Unbeaten light heavyweight contender Joshua Buatsi (12-0, 10 KOs) defeated a game journeyman Ryan Ford (16-5, 11 KOs) by a 7th round knockout. Buatsi hit him Ford with a low blow followed by a punch to the back of his head to put him down. Ford was too hurt to continue.

The referee didn’t waive off the knockdown despite the two fouls from Buatsi, but it likely wouldn’t have mattered. Ford was hurt from a left to the head moments before, and wasn’t going to make it out of the round. The official time of the stoppage was at 1:07 of round seven.  The performance by Buatsi showed that he has a lot of improving he needs to make before he steps it up against better fighters. Callum Johnson would have likely beaten Buatsi tonight.

With all the shots Buatsi was hit with by Ford, Johnson would have given him big problems with his power. Buatsi is a good fighter, but he’s not an elite level guy right now. He’s definitely a tier down from the top fighters at 175. His promoter Eddie Hearn needs to think carefully before he matches him against one of the world champions at 175, because he’s not ready. Anthony Yarde vs. Buatsi would be a great fight between two raw guys with excellent power.

In a fight for the vacant WBA international lightweight title,  James Tennyson (25-3, 21 KOs) beat Atif Shafiq (21-2, 5 KOs) by a 2nd round knockout. Tennyson has bounced back nicely since his loss to IBF 130-lb champion Tevin Farmer last year.