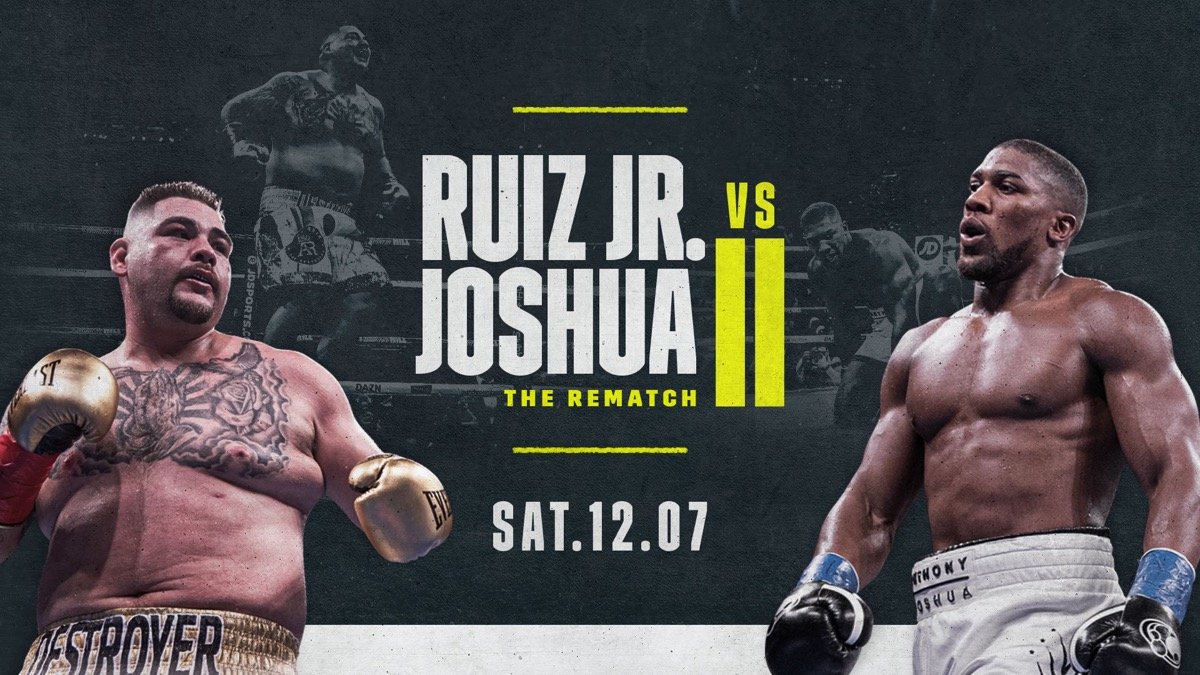 By Chris Williams: Virgil Hunter wants Andy Ruiz Jr. to get into camp and commit to training 100% for his rematch with Anthony Joshua on December 7. Ruiz’s trainer Manny Robles recently revealed that Andy was supposed to have started training last Monday for the rematch with Joshua (22-1, 21 KOs) in Saudi Arabia, but he chose not to.

Both fighters will get big paydays for the rematch

Ruiz and Joshua will be making a huge amount of money in their rematch. It’ll be shown on Sky Box Office PPV in the UK, and DAZN in the U.S. With the money that Ruiz will be getting, he’ll be set for life. Obviously, it’s got to be hard to get motivated when you suddenly find yourself a multimillionaire overnight.

Robles said that Ruiz was at home working out on his treadmill. Hunter doesn’t like what he’s hearing from Ruiz Jr. (33-1, 22 KOs), and he may be getting lazy that he’s tasted fame bought a nice house and car.

There’s a lot of time before the December 7 rematch, and if Ruiz starts training now, he end up over-trained for the fight. Ruiz fought well looking chubby at 268 pounds for his June 1 fight against Joshua at Madison Square Garden in New York. He blew Joshua out in 7 rounds, and knocked him down 4 times in the short fight.

“There’s so many questions and answers to that fight; Joshua was this Joshua was that,” said Hunter to Fighthype. “It seemed to be style match-up nightmare for Joshua. A style match-up that he didn’t anticipate. And he might have let his thoughts on Andy Ruiz’s ability weigh-in just a little bit. And when he got caught, he got caught in the wrong spot that he couldn’t recover from of the damage from it. You can only take his word for it.

I think it’s kind of simple for Joshua. He’s got to fight at a range and a distance to minimize those effective attacks, those mid-range attacks that Andy Ruiz was able to bring into the fight. He can’t get overexcited. He’s got to be prepared to fight a round after round fight staying steady, staying consistent. He has to make sure that all the things that let him down in the first fight are in fact intact. #1 is his stamina. #2 is movement. #3 is not taking his eyes off punches, and getting hit with punches he doesn’t see. If you look at his fight, he got hit with a lot of shots that he did not see. So there’s a defensive correction that he needs there,” said Hunter.

Joshua, 29, looked entirely unprepared for the hand-speed, and the combination punching from Ruiz. AJ appeared to be taken by surprise with the speedy combinations that Ruiz was hitting him with, and especially the ferocity of his counter attacks.

Joshua needs to make a lot of improvements to beat Ruiz

“He needs to fight tall, not short,” said Hunter about Joshua in the rematch. “I agree with that to a certain extent, and I don’t agree with him fighting tall. And, I agree with him fighting long. So there’s a difference between fighting long and fighting short. He doesn’t have to stoop down. He has to stretch out. So that adds another foot to Ruiz being able to get to him. If he knows how to use that lead hand to stop him from coming in, he can control that whole situation with his lead hand, and use his followup punches at the right time. But the lead is the whole key.

His legs and his lead hand. I would suggest that he shadow boxing everyday six to eight rounds; every day, move and move it until his legs are programmed, and he’s using the whole ring. He has to set a footwork pace on Ruiz. He let Ruiz take the steps that he was comfortable with. so he would need to setup a footwork pace that would benefit him in the fight to make Ruiz step quicker, move quicker, and work harder to get in range, and test his conditioning. All those things, I believe, will play a factor in the fight,” said Hunter.

It sounds like Joshua needs to retool his entire game from top to bottom, and all in one 10-week training camp. Joshua is a smart fighter, but it sounds like it’s going to be an impossible task for him to make so many critical changes to his game before December 7. Joshua is like the character Humpty Dumpty from the English nursery rhyme. Once he fell apart, no one could reassemble him. AJ is like Humpty Dumpty.

“His corner deserves to have him in camp to be prepared,” said Hunter about Ruiz. “I heard he’s not in camp. Fighters need to realize that trainers sacrifice a lot. So if you’re going to go into a big fight, you should give your trainer all the respect that is due. Part of that is if they want you in camp at a reasonable time, then you should be in camp. If your opponent is training, you should be there showing that corner, ‘Hey, we’ve got someone that believes in us. We’ve got somebody that respects the work the work we’ve put in. We’ve got somebody that has got a good plan. And not say that I’m going to be there on Monday, and that I’m working on a treadmill.

Taking the easy way out and being lazy about it. He’s cheating the public out of a good fight. I’m not in a position to say who wins, but I’m just thinking about the trainer. And, I’m not talking about the fighter. I’m thinking about the trainer, because that’s what we go through. Not too many fighters will give you 100% commitment. Very few fighters will give you that workload you need to be on top, and then you have to go with it. And you’ll get the blame as soon as there’s a loss, and somebody has to be there to tell Andy Ruiz, ‘Look, all of this can be snatched away from you. All that love you’re getting here, and all the love you’re getting there can be snatched away from you with one loss,” said Hunter.

What we don’t know about Ruiz is whether he’s been a fighter that has lacked the commitment his entire career when it comes to training.

Ruiz may never recover if he gets knocked out

“Let there be a knockout loss, then you’ll never recover,” said Hunter about Ruiz. “All because you couldn’t handle the fame. All because you the people in your corner, you didn’t take them under consideration, and realize this is just as much for their career as it it for his. Their reputation is on the line. I can’t tell you how many times your reputation is on the line because of the fighter is neglecting. The fighter is non-committing attitude or the work habits, and things like that. The corner gets the blame, and the fighter didn’t treat the people, the people who are training him, the fighter did not consider them the way they should have been considered.

So I would just consider him to have respect for your corner, have the respect for the work they put in, and get in the gym, and help them get into the Hall of Fame. Help them get a reputation to continue to make a living long after you quit fighting. Their reputation that you helped them build a program that other fighters will be attracted to, and come and let you set a standard for them by saying, ‘Hey, I gave them 110%,’ and that trainer is able to tell another fighter, ‘Andy gave us 110%. This is what we expect of you, and if you do what he does, you’ll be a winner. You may not be a champion, but you’ll be a winner,” said Hunter.

On my journey I fell down a couple times but I never fell off 👑 #AJBXNG pic.twitter.com/I2OqQmCB2f

Hunter wants Ruiz to think of his training team

“So I’d like to see him get in camp to make sure this fight turns out to be where he just let it go from his hand,” said Hunter. “He can’t get himself up, and can’t get himself to look at the other side of the picture. How his trainers, and how his corner feels about him not being there with the pressure he puts on them, because they have dreams also. You hear stuff, and even his own corner says he was supposed to be in this day, but he didn’t. That he’s at home working on the treadmill. Come on, if I’m at home working on a treadmill, because when you make that kind of money, you get lazy, man. It’s easy to get lazy.

He’s blessed himself. He deserves a nice car, and he deserves a nice house. He did great things for his mother, but do you want to stop right there? You just want to stop right there or do you want to take it to another level? You’re talking like you want to take it to another level. Well, walk the walk. Walk the talk. So I would like to see the commitment come seeing on the behalf of the trainers. I’m not going against Andy Ruiz. He’s a hell of a fighter looking for a great fight. But being from the trainer’s maternity, I know it’s very hard, very difficult, particularly when you can’t get the fighters to commit to what you need them to commit to,” said Hunter.

If Ruiz’s head isn’t into boxing, which seems like the case, his rematch with Joshua will be a cash out on December 7. Ruiz will lose by a knockout, and never be heard of again. Fans are hoping that won’t be the case though.