Gennady Golovkin vs. Sergiy Derevyanchenko in negotiations for Oct.5 at MSG, NY 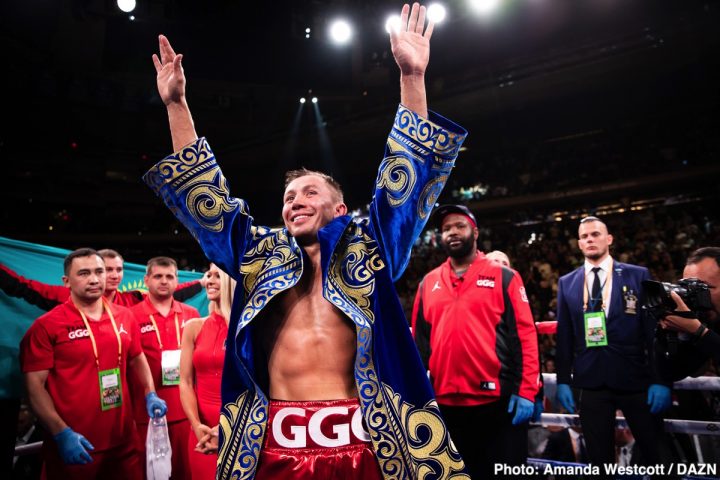 By Sean Jones: Gennady Golovkin and Sergiy Derevyanchenko are in negotiations for a fight for the vacant IBF middleweight title. The fight could take place on October 5 at Madison Square Garden in New York, according to Mike Coppinger

Saul Canelo Alvarez gave up his IBF 160 pound title earlier on Thursday when he was unable to put together a deal with his mandatory Derevyanchenko (13-1, 10 KOs). It’s unclear how much Canelo’s promoters at Golden Boy Promotions were offering Derevyanchenko to fight. On paper, it looks like a bad move on Derevyanchenko’s part in not agreeing to a deal to fight Canelo, because that would have potentially been a much bigger fight than Golovkin-Derevyanchenko. Golovkin has the punching power, and boxing skills go give Derevyanchenko a lot of problems.

GGG and Derevyanchenko will battle for IBF title

With the IBF title now vacant, Derevyanchenko and the next highest ranked contender #3 IBF Golovkin (39-1-1, 35 KOs) will battle for the belt. GGG, 37, is said to be willing to take the fight with Derevyanchenko, even though he gave up the very same IBF title last August when the International Boxing Federation ordered him to defeat against the Ukrainian fighter.

“The IBF is expected to now officially order a middleweight title fight between Sergey Derevyanchenko and Gennadiy Golovkin, and it’s expected negotiations will go more smoothly, per sources. There’s no deal yet between GGG and Sergey Derevyanchenko, but it’s expected one will be completed soon. They’ll vie for the IBF middleweight vacated by Canelo once a deal is signed. That fight could take place Oct. 5 at Madison Square Garden, per sources, and of course, would be streamed by DAZN #bigdramashow,” said @MikeCoppinger.

Some fans might argue that Derevyanchenko and Golovkin don’t rate to be fighting for the vacant IBF 160 pound title, since both guys were recently beaten. Golovkin lost to Canelo Alvarez last September by a 12 round majority decision, whereas Derevyanchenko, 33, was beaten Daniel Jacobs by a 12 round split decision last October. Nevertheless, GGG and Derevyanchenko are considered world’s better than the next highest ranked contender Kamil Szeremeta in the IBF’s rankings. Jacobs is rated #5 with the IBF, but he’s expected to move up to super middleweight for his next fight.

GGG-Derevyanchenko negotiations will be interesting

Saul Alvarez and his promoters at Golden Boy had no luck in negotiations with Derevyanchenko. Now it’s GGG’s turn. He’ll likely stick it out for the long hall to get this fight made, because he needs the IBF belt as a lure to get Canelo to face him in a trilogy fight. Alvarez asked GGG to win a world title before coming back for a third fight, but he’s thus far not done what he asked. If GGG can beat the slow and easy to hit Derevyanchenko, he’ll be able to bring something to the table for a third fight with Canelo.

Derevyanchenko can fight a little, but he didn’t look great against Daniel Jacobs. Derevyanchenko was dropped early, and he struggled with Jacobs’ combination punching and hand speed. The good news for Derevyanchenko is Golovkin isn’t as fast as Jacobs, and he’s not as big as him either. The bad news is Golovkin hits hard, has a great jab, and he’s a better overall fighter. Derevyanchenko barely beat Jack Culcay by a 12 round unanimous decision in an IBF eliminator last April. The scores were 116-112, 116-112 and 115-113. If Derevyanchenko can’t fight better than that against GGG, he’s going to get taken apart and wind up getting knocked out like Steve Rolls.

The was Golovkin’s last opponent in June, and he destroyed that guy in four rounds. That was GGG’s first fight with his new trainer Johnathon Banks, who is trying to get him to throw more punches. GGG followed Banks’ instructions in round four, and he was able to knockout Rolls quickly. But in the first three rounds, GGG fought at the same slow pace that he did in his two fights with Canelo, and this enabled Rolls to find a surprising amount of success against him. If GGG wants to get rid of Derevyanchenko, he’s going to need to take the fight to him in the same way he did against Rolls.

Derevyanchenko will let fans see how much Golovkin has left

There’s a perception that Golovkin has lost a few steps, and isn’t the same fighter that dominated the middleweight division during an eight year period. The perception is there due to GGG’s two fights with Canelo, and his matches against Daniel Jacobs and Kell Brook. Those weren’t dominating performances by GGG. However, that was with Golovkin’s old trainer Abel Sanchez. Gennady has a new trainer in Banks, and he wants to have him take advantage of his power to walk down his opponents to steamroll them.

In Golovkin’s last fight against Rolls, he showed that his punching power is still there 100 percent. He hasn’t lost any of his power. If his hand speed isn’t the same, it might not matter if he can make up for it by being able to throw more shots. Rolls couldn’t stand in there with Golovkin in the fourth round when he started landing his looping shots on the top of his head. Rolls has more power than Derevyanchenko, but he’s not as clever. There’s little chance that Derevyanchenko will stand stationary and cover up the way that Rolls was doing against GGG. Derevyanchenko will try and box, and keep Golovkin from landing his power shots when he wants to.

Canelo could face Demetrius Andrade next

Now that Canelo has lost his IBF title after being stripped, he’s expected to fight WBO middleweight champion Demetrius Andrade next. The winner of that could could then potentially fight the winner of the Golovkin vs. Derevyanchenko match for the undisputed middleweight championship. All four middleweight titles would be in the line, unless one doesn’t consider Canelo’s WBC Franchise belt as a true world title. That’s a belt that Canelo can’t lose. It’s  a title the World Boxing Council recently bestowed on Canelo for his great accomplishments in the sport, The WBC then took Canelo’s WBC title and gave it to interim champion Jermall Charlo. So even though Canelo technically has a title that he can’t lose with his Franchise WBC belt, it’ll still be seen as being on the line when he faces Andrade, and then potentially the winner of the Golovkin vs. Derevyanchenko fight.


« Canelo Alvarez vs. Demetrius Andrade in talks for a unification fight