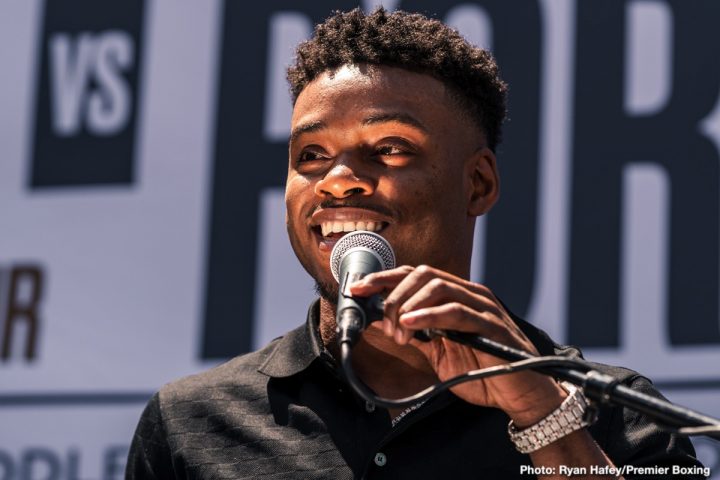 By Chris Williams: Errol Spence Jr. disagrees with ESPN broadcaster Timothy Bradley that he’s been avoiding a unification fight against Terence Crawford in favor of other fights. Bradley got upset the other day in complaining about how the top Premier Boxing Champion welterweights like Spence (25-0, 21 KOs) haven’t shown the desire to cross the street to face the uneaten WBO 147 pound champion Crawford (35-0, 26 KOs) on ESPN.

Spence says he’t not avoiding a fight against the 31-year-old Crawford, because he’s interested in that match-up. But first things first; Spence has a unification match against WBC welterweight champion Shawn Porter (30-2-1, 17 KOs) on September 28 on Fox Sports Pay-Per-View at Staples Center, in Los Angeles, California.

Spence: How am I avoiding Crawford?

“How am I avoiding him if I’m fighting in a unification fight with Shawn Porter?” said Spence to Fighthub about Crawford. [Porter is] Atop 5 welterweight so the last time I remember the WBC ordered me and him to fight each other and, you know, he didn’t take the fight. So, nobody is avoiding Terence Crawford. It’s big fish on this side too that I got to fry. So, once I get rid of [Manny] Pacquiao and Shawn Porter, then we can sit down and talk about Terence Crawford. But nobody’s avoiding him,” said Spence.

What ESPN talking head Bradley doesn’t quite understand is Spence, 29, has a full plate with all the PBC fighters on his side of the tracks right now, and there’s no room right now for Crawford. Besides that, Crawford still isn’t a big name for whatever reason. Whether it’s a lack of charisma, personality or his defensive fighting style, Crawford hasn’t become a star in the U.S. Crawford’s use of switch-hitting gimmicks, movement and taunting of his opponents hasn’t resonated with boxing fans.

Instead of being a blue collar entertainer like middleweight Gennady Golovkin, Crawford uses gimmicks, and it’s not thrilling for boxing fans to watch. While the ESPN commentators compliment Crawford nonstop for his ability to change fighting stances, it’s not interesting to watch. You can comment on it once, but to talk about it endlessly during a broadcast, it’s forlorn. The average boxing fan cares more about seeing action, which is what Spence and GGG supply. The other junk like changing stances, counter punching, and running around the ring is a waste. Fans want to see action, and Crawford doesn’t supply enough of that. He’s too focused on sticking his tongue out, moving and changing stances needlessly during his fights. Crawford’s changing of stances is completely irrelevant, because he dominates out of the right-handed stance. Why change stances when you’re already beating the daylights out of a hapless opponent like Horn, Khan or Benavidez?

Guys like Keith ‘One Time’ Thurman and Danny Garcia have left Crawford far behind when it comes to bringing in the boxing fans. Crawford has fans in his home state of Nebraska, but that’s not a major draw. Spence has a lot more going for him now than Crawford does in terms of his career. Obviously, it’s understandable why Bradley would want Spence to fight Crawford. Bradley is with ESPN as a commentator, and Crawford fights on ESPN.  If you connect the dots, it helps Bradley for Spence to fight Crawford, because the fight would be on ESPN. You can argue that it’s a win-win for Bradley in his commentating job. It gives him something to talk about.

Getting the WBC title is the easy part for Spence, as he’s facing Porter, 31, next on September 28. But it could prove more difficult for Spence to get his hands on the World Boxing Association strap held by Manny Pacquiao (62-7-2, 39 KOs), because the Filipino star hasn’t committed himself to facing Errol. Pacquiao, 40, has other options for winnable fights against Amir Khan and Danny Garcia.

There’s no telling which direction Pacquiao will go in. If Manny’s focus is on making money in fights that he can win, then he may look to fight Khan or Danny Garcia next. There’s also a high degree of fan interest in seeing Pacquiao and Thurman (29-1, 22 KOs) fight a rematch. Their fight contest on July 20th was an exciting match with both guys taking huge punches, and coming back for more. Thurman showed an incredible heart in getting hurt twice, and still fighting back.

Throwback Thursday: some highlights for y’all #sounds by @RickRoss and @Drake pic.twitter.com/KiqDGsy7TS

Once Spence has exhausted all the compelling fights with PBC, he’ll have no one left other than Crawford for him to fight at 147. Hopefully, Top Rank Boxing can start putting Crawford in with some interesting opponents before then, so that he can increase his popularity. Crawford has recently beaten these guys: Amir Khan, Jose Benavidez Jr., Jeff Horn and Julius Indongo.