Derevyanchenko – “I don’t Think Golovkin scared of me” 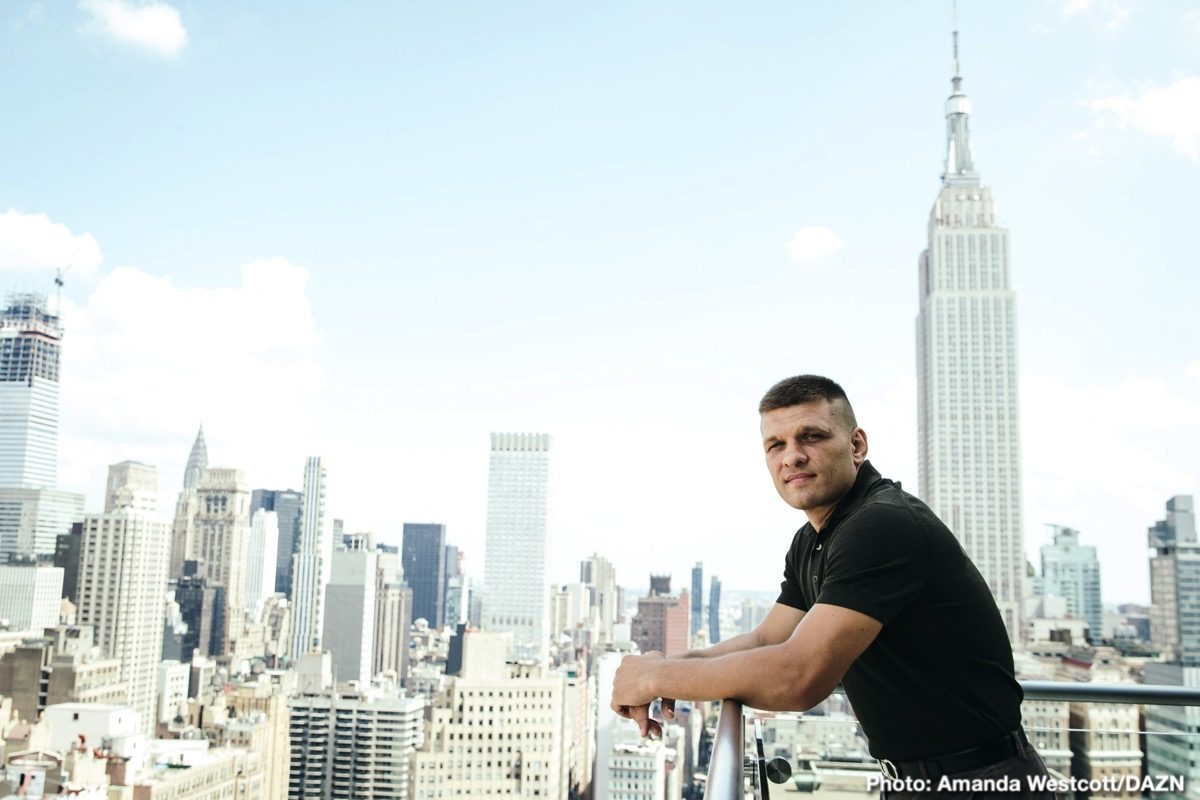 By Doug Berman: Sergiy Derevyanchenko doesn’t believe that former middleweight champion Gennady ‘GGG’ Golovkin is truly scared of him, as he stated at their press conference last week in New York. Derevyanchenko (13-1, 10 KOs) says he thinks Golovkin (39-1-1, 35 KOs) is lying, and playing a game. But he says he’s not scared of Gennady, and he’s going to show that on October 5 on DAZN.

Golovkin and Derevyanchenko will fight for the vacant International Boxing Federation middleweight title. The Golovkin-Derevyanchenko bout will take place at Madison Square Garden in New York, and it’ll be a large crowd in attendance.

I’m going out on October 5th, and everything will show what I do. My big experience from against [Daniel] Jacobs. I’m more experienced. Yeah, this is a big money fight [against Saul Canelo Alvarez]. No rematch [clause for GGG fight]. No sign me,” said Derevyanchenko when asked if Matchroom Boxing promoter Eddie Hearn had attempted to sign him. “Last fight was with DiBella Entertainment.”

Fear won’t play into the outcome of this fight. Golovkin can be courageous and unafraid, but that doesn’t ensure that he’ll beat the 33-year-old Derevyanchenko. GGG fought with bravery against Saul Canelo Alvarez, and yet still failed to beat him in two fights.

“I have the best opponent, Sergiy. I’ve know him for a long time and he’s a very good fighter,” said Golovkin at the kickoff news conference for his October 5 fight with Derevyanchenko. “This is a real fight. I’m a little bit scared because he’s good. I know his team is very strong. And I’m scared because he looks good. He looks strong. He feels it’s his time right now. Maybe – this is boxing, nobody knows,” said Golovkin.

Golovkin, 37, is having fun with the boxing fans that claimed that he ducked the Derevyanchenko fight last year when the IBF ordered them to fight. GGG gave up his IBF title rather than face Derevyanchenko. The reason Golovkin gave up his belt because the IBF wanted him to defend against Derevyanchenko in August, and it would have left one month before his September fight with Canelo. There wasn’t enough time for GGG to fight both guys, so he chose the bigger money match against Canelo. Derevyanchenko is a good fighter, but he’s not well known in the United States despite living there.

Derevyanchenko’s body punching is going to give Golovkin problems, and it’ll be interesting to see how he adjusts. Canelo Alvarez hurt Golovkin to the body last September, and backed him up all night in their rematch in Las Vegas, Nevada. The hungry Derevyanchenko is a quick learner, and he’ll follow the blueprint Canelo used to beat Golovkin to the letter. If Golovkin fails to adapts, then he’ll lose to Derevyanchenko.