Dave Allen to fight on Oct.19 on Ritson-Davies card

By Charles Brun: Heavyweight Dave Allen (17-5-2, 14 KOs) will be returning to action on October 19 on the Lewis Ritson vs. Robbie Davies Jr. card on Sky at the Newcastle Arena in Newcastle. Allen, 27, will fighting an eight round bout against opponent still to be determined. The ‘White Rhino’ Allen maintains that there’s absolutely nothing wrong with his health, and that he’s had all the brain scans and tests to be cleared 100% for his fight on October 19.

Allen is coming off of a 10th round stoppage loss to David Price on July 20 at the O2 Arena in London. Allen fought hard, but he didn’t possess the size, power or pedigree to beat Price. Allen’s left eye closed from the punishment he absorbed from Price, and this led to the fight being stopped. After the contest, Allen made it clear that was considering retirement from boxing. But after careful thought, Allen decided to continue his career.

“After the Price fight, I wasn’t sure I wanted to box again,” said Allen to Boxing Social. “I went down the right avenues, and had all the brain scans. And, I am fit and ready to fight. I passed my scans, and did that in writing to the [British Boxing] Board. I need to see the Board to talk about. But I was a little unwell before the Price fight, and they way to know why I didn’t pull out of the fight. I did all the medical checks. And, I got everything cleared. I am healthy.

I did the brain scan and everything cleared just to see if anything is wrong with me apart from fatigue. There wasn’t. And, I then had to listen to people saying, ‘Your speech is slowing, and you’re slurring.’ I then went home to my family and said, ‘sit me down; do I sound like I’m slurring? Do I sound like I’m slower?’ Absolutely not! my jokes are A-1, and I’m as witty as ever. My speech is fine. I just talk like this because this is where I’m from. This is the way we all talk,” said Allen.

Allen sounds a slower than he used to, but he suffered a badly cut tongue in his loss to Luis Ortiz in 2016, he’s not sounded the same since. That was a crazy fight for Allen to be in, as he didn’t have the experience to be fighting Ortiz. The same goes for Allen’s fights against Tony Yoka and Price. Those were mismatches in terms of experience. Allen’s promoter Hearn has thrown him in the deep end repeatedly in fights, and he’s floundered. Occasionally, Allen has done well, but mostly he’d sunk to the bottom. 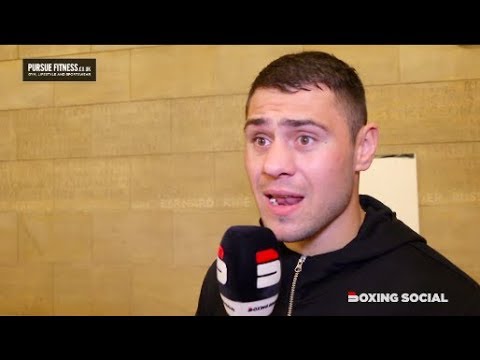 Allen: I want to make enough money to be set for life

“I’m fighting for three reasons,” said Allen. “Number one, I want to be the British heavyweight champion…number three, I need money to live the rest of my life. I got hit a lot in fights, but I’ve not sparred in four or five years. And, I don’t get hit as much as people think. I haven’t sparred in years. I am not a silly man. People might think I’m an idiot. I’ve done well. I’d like Denis Bakhtov [as next opponent on October 19]. I don’t want an easy fight. And, I want a 10 rounder. I want a challenge, and I want the fight to mean something. A little belt would be good. I’m boxing again before David Price, because I enjoy it,” said Allen.

For Allen to achieve his goal of becoming financially set for life, he’s going to need to put together a winning streak, and beat someone notable. With Allen’s fan base, he could wind up headlining his own card if he can beat someone like Alexander Povetkin. Allen is going to need to get a win over a name fighter for him to set himself up for life. It doesn’t seem like a realistic goal at this point unless he puts together a long winning streak.

The way that Allen looked against Price, that’s not realistic. Before losing the Price fight, Allen had looked great in winning four fights in a row against these guys: Nick Webb, Ariel Esteban Bracamonte, Lucas Browne and Samir Nebo. Allen lost a bunch of weight for the Price fight, and that seemed to drain a lot of the punching power that he’d shown in recent fights. The weight loss didn’t help him, and he wasn’t as aggressive as he needed to be.

Allen disappointed in performance against Price

“My performance [against Price] was extremely poor,” said Allen. That was probably the worst performance I’ve put in as a pro. The bottom line was Price was good, really good. I lost the fight. Absolutely not,” said Allen when asked if he had overlooked Price in focusing on the Alexander Povetkin fight. “There was 400,000 reasons why I signed for the Povetkin fight, and I’m heartbroken about it. I wasn’t looking passed him.

If I can’t hit you, then I can’t beat you. I couldn’t hit David Price. He was too good. I think [Andy] Ruiz wins again,” said Allen when asked his prediction on the Anthony Joshua vs. Ruiz Jr. rematch on December 7. “I don’t think the first fight was a fluke. I want Joshua to win, because I think it’s better for British boxing. I’m in the Matchroom fold. I need Joshua to win. I want him to win, but I think Ruiz wins again,” said Allen.

Matchroom Boxing promoter Eddie Hearn likes Allen, and he’s going to look to rebuild him slowly despite his one-sided loss to Price. It’s not likely that Allen will face anyone remotely good on October 19. He’s got to be skillfully rebuilt otherwise he could fall apart again. Allen didn’t fight the way he needed to in the Price fight, and he wasn’t going all out in order to score a knockout. Price was there to be beaten if Allen had fought the right fight, but he didn’t do it.

Hearn was looking to match Allen against former WBA heavyweight champion Alexander Povetkin if he had gotten past the 36-year-old Price (25-6, 20 KOs) last July. Allen would have gotten a nice payday in the Povetkin fight, but unfortunately he wasn’t up to the task. Price had too much size, power and boxing skills. The experience that Price brought to the table for that fight was too much for Allen to deal with. Unlike Price, Allen wasn’t blessed with a superb amateur career, and he certainly didn’t go to the Olympics.