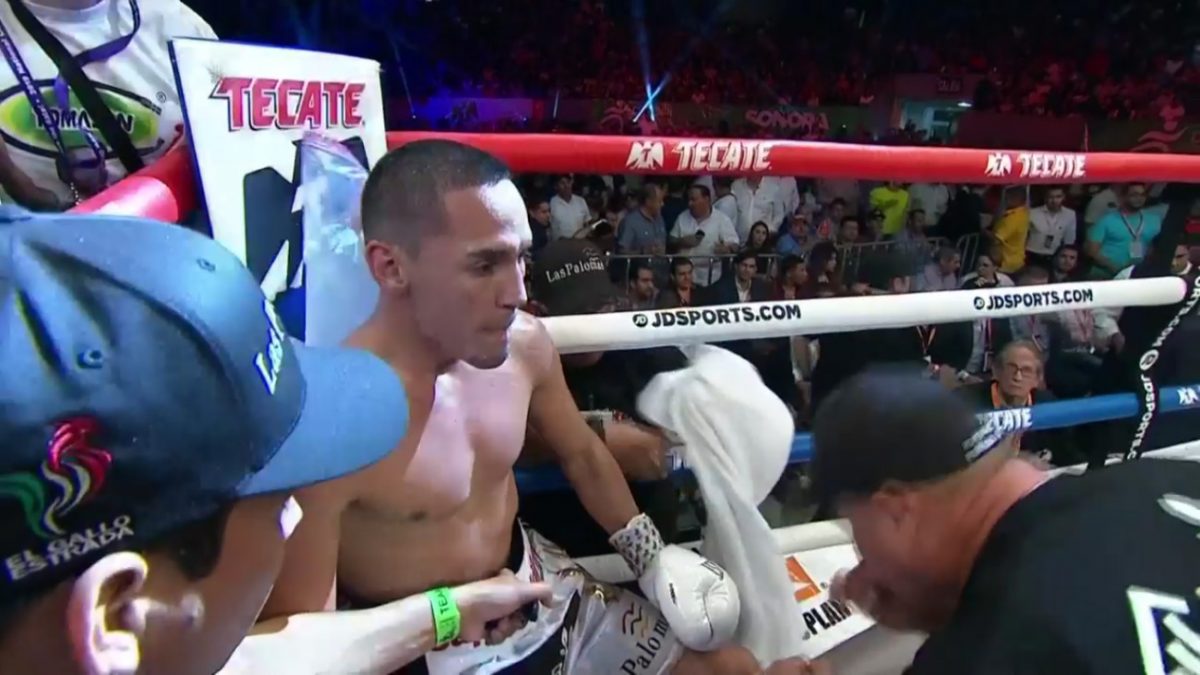 In the ninth, Estrada hurt Beamon with a series of hard shots that led the referee to step in and stop the fight. Beamon had been hurt since the seventh round after he was clipped by two hard punches to the back of his head from Estrada. He never recovered from those fouls.

The referee blew two calls in round two in giving Estrada, 29, credit for knockdowns in which Beamon’s feet got tangled up. It was clear on watching the replay that Beamon’s front foot hand gotten hooked with Estrada’s, causing him to go down. Later, the referee failed to address the rabbit punches Estrada landed in the seventh round that staggered Beamon.

🇲🇽 @GalloEstradaOfi lays down a sensational performance in front of a home crowd to retain his WBC World & Ring titles! #EstradaBeamon pic.twitter.com/QJrmiYP3Gj

Those were clear rabbit punches to the back of the 34-year-old Beamon’s head that the referee should have warned Estrada about. In the eighth, Estrada hurt Beamon with a low blow. The referee didn’t do anything about it.

Estrada had the better overall talent, but Beamon’s hand speed, size and trash seemed to keep him in the fight. Beamon looked like the better fighter in rounds 1, 4, 5 and 6. Despite the two knockdowns and the ninth round stoppage, the match was competitive from start to finish. Estrada is a good fighter, but he’s lost something from his game from all the hard head shots he ate in his two fights with Srisaket Sor Rungvisai. He lost the first fight to Rungvisai by a 12 round decision last year in February 2018.

In their rematch last April, Estrada defeated Rungvisai by a narrow 12 round decision in front of a pro-Estrada crowd at The Forum in Inglewood, California. Rungvisai would have likely won that fight if he’d fought in Thailand or in a neutral venue. Estrada having the crowd on his side in both fights with Rungvisai greatly helped him, because it gave him energy. It would be nice to see Estrada and Rungvisai fight in a trilogy match, preferably in a neutral venue instead of doing in Southern California again.

Unfortunately for Rungvisai, he’s not in the position to dictate the venue for the Matchroom Boxing signed Estrada. There would be a lot of fan interest in a rematch between Estrada and Roman ‘Chocolatito’ Gonzalez, but that’s probably not realistic. Gonzalez has had knee problems, and he hasn’t fought in 11 months. His career is on the downside after he suffered two losses to Rungvisai.

Unbeaten 2016 super heavyweight silver medalist Filip Hrgovic (9-0, 7 KOs) stayed in the unbeaten ranks with a third round knockout win over chubby journeyman Mario Heredia (16-7-1, 13 KOs) in the co-feature. The bout was scheduled for 10 rounds, but the 27-year-old Hrgovic made it quick in knocking Heredia to the canvas in round three.

The fight was then halted. The official tie of the stoppage came at 0:43 of round. The 6’6″ looked robotic, like a slower, stiffer version of Wladimir Klitschko, but without the talent that he had. Hrgovic mostly had his way in the first two rounds in landing hard shots to the head of Heredia. A lot of Hrgovic’s punches missed, and he was getting countered occasionally by big shots from Heredia that were whipping his head around.

It didn’t look good with punches that Heredia was hitting Hrgovic with, as if this had been a better heavyweight like Deontay Wilder or Andy Ruiz Jr., he might have been knocked out. This fight showed that Hrgovic badly needs to work on his defense before he steps it up against world class opposition. Hrgovic can look flawed and win against the journeyman level opposition that he’d being fed by his management, but he can’t against good heavyweights.

They would clean his clock with the way he fought tonight. Hrgovic is ranked WBA #6, WBC #11, and IBF #12. Matchroom Boxing promoter Eddie Hearn might want to put the brakes on Hrgovic’s career to slow him up until he improves enough to be safely put in with the world level heavyweights.

Former World Boxing Organization junior middleweight champion Liam Smith (28-2-1, 16 KOs) beat journeyman Mario Alberto Lozano (33-10, 24 KOs) by a seventh round knockout.  Smith knocked Lozano, 32, down in round six with a hard right hand to the head. A round later, Smith knocked Lozano out in the seventh. The fight was stopped at 1:02 of round seven. The win for Smith was his second consecutive since losing to Jaime Munguia by a 12 round unanimous decision last year in July. In 2016, Saul Canelo Alvarez stopped Smith in the ninth round to take his WBO 154-lb title in Arlington, Texas.

Smith was competitive against Canelo, but he wasn’t in his class in terms of talent. In Smith’s previous fight before tonight, he defeated British domestic junior middleweight Sam Eggington (26-6, 15 KOs) in a scrap for the vacant WBC Silver 154-lb title. Despite winning that belt, Smith appears to be going after the WBO 154 pound title, which is expected to be vacated shortly by Munguia (33-0, 26 KOs).

He’s defending the WBO belt for the last time next month on September 14 against Patrick Allotey (40-3, 30 KOs) on DAZN at the Dignity Health Sports Park , in Carson, California. Smith is a good junior middleweight, but he doesn’t match up well against the top fighters at 154. His best hope to win another belt is to go after the World Boxing Organization title after Munguia vacates it.

2016 Olympic silver medalist light welterweight Shakhram Giyasov (9-0, 7 KOs) defeated aging 35-year-old former WBA lightweight champion Darleys Perez (34-6-2, 22 KOs) by a first round knockout. The 26-year-old Giyasov, who comes from Uzbekistan, dropped Perez with a left to the head. The defeat for Perez was his third in his last four fights.

Former super featherweight world title challenger Jono Carroll (17-1-1, 3 KOs) defeated journeyman Eleazar Valenzuela (20-12-4, 16 KOs) by a 10 round unanimous decision. The scores were 98-92, 98-92 and 98-92. Boxing News scored it the same for Carroll 98-92. In Carroll’s previous fight, he was beaten by IBF super featherweight champion Tevin Farmer by a one-sided 12 round unanimous decision last March.

Unbeaten super middleweight prospect Alexis Espino (4-0, 3 KOs) beat Oscar Soto (1-2) by a third round knockout. The time of the stoppage was at 1:49 of round three. Espino, 19, knocked Soto out with a left to the head.