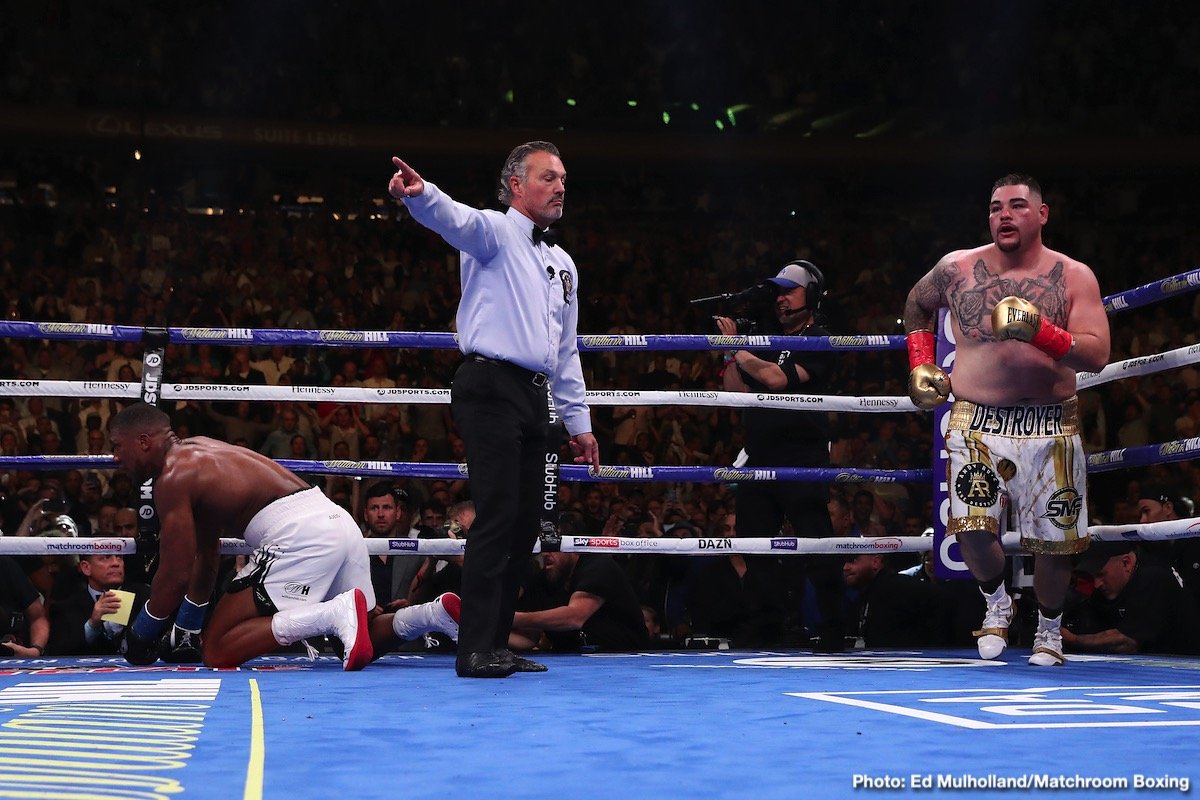 By Matt Lieberman: Andy Ruiz Jr. has agreed to take the fight with Anthony Joshua in Saudi Arabia on December 7, but with a new financial package, according to Mike Coppinger. It’s unclear how much of an increase Ruiz (33-1, 22 KOs) is getting from the $9 million that he was expected to get for the Joshua (22-1, 21 KOs) rematch.

Ruiz is said to be “happier” with his bump up in pay, according to a source for ESPN.  Paperwork is being sent from Joshua’s promoter Eddie Hearn to Ruiz’s management team Al Haymon and Tom Brown to look over. Once they give the green light, Ruiz will sign the contract. Ruiz wanted the rematch to take place in Mexico or the United States, but Hearn and Joshua didn’t agree.

With the fight being world upwards of $60 million potentially, it looked odd that Ruiz would only be getting $9 million. Whatever the fight brings in, Ruiz would obviously want close to a 50-50 deal as the IBF/WBA/WBO heavyweight champion.

“Sources: Andy Ruiz Jr. has agreed in principle to head to Saudi Arabia for the rematch with Anthony Joshua on Dec. 7 after receiving a new financial package. Full details and storylines to watch now that #RuizJoshua2 is moving forward,” said @MikeCoppinger.

“Bob Arum, who is desperate for Andy Ruiz to end up in a court case with no money and lose his IBF belt, and now he’s saying that the government is saying you can’t go there,” said Joshua’s promoter Eddie Hearn. “Absolutely rubbish. Bob Arum also says it’s a war zone. Absolute rubbish. We were there three days ago. It’s spectacular. They had some questions. We were talking. There’s a press conference in two weeks. Both fighters will be there, an it’ll take place. We’ve got a contract. We followed the exact rules of the contract. We have a rematch clause with a venue to be decided by us. All we’ve got to do is let them know where the venue is,” said Hearn.

Hearn sounds he’s got Ruiz Jr. on board with taking the rematch in Saudi Arabia. It’s believed that Ruiz’s issue wasn’t so much about fighting the rematch with Joshua in Saudi Arabia. It was more about the money. Although Hearn states that he chose Saudi Arabia to give Ruiz his wish of a neutral venue, it’s believed the reason he took the fight there was the money. The Saudi organizers put in a huge offer to bring the fight to that country, and it’s a great deal for Joshua. Ruiz’s rematch contract, which states how much he can make, keeps him from sharing the huge money that Saudis are paying.

“Bob Arum has totally lost the plot,” said Hearn in lashing out at Top Rank promoter Bob Arum for him saying Ruiz can back out of fight. “He hates Andy Ruiz so much that all he wants to do is waste his career, lose his belts. That’s the main thing. He’s got [Kubrat] Pulev. So if he doesn’t take this fight [against Joshua], then Pulev gets the belt. So what Arum has got to do is concentrate on his own shows. His last two shows, one in LA and the other in Philadelphia, sold an accumulated amount of tickets of around 800. Next week, I’m getting him out of trouble, sending 18,000 people to London to Campbell vs. Lomachenko. So, Bob just needs to calm down. I know he’s trying to cause trouble for Andy Ruiz,” said Hearn.

Arum said this week that Ruiz Jr. can legally back out of the Joshua fight if he wanted to, because the U.S State department say it’s “too dangerous to go over.” Arum says “No judge would make him do that.”  Further, Arum mentioned that a fighter doesn’t have to take a fight if they want to stage it in a “war zone.” It would get interesting if Ruiz chose to not take the Joshua rematch and argue that it’s too risky to fight in Saudi Arabia. If the U.S courts backed him, then Hearn would have to change the venue whether he wanted to or not.

Hearn: The Joshua vs. Ruiz fight is on!

Of course the money is good. I’m not going to lie to you. There is a whole another world out there in boxing. If the Middle East became invested in boxing, I promise you, you’re not seeing as many mega-fights in this country or the UK. Because this country or the UK can’t match the kind of investments in the Middle East. Those are the facts. People say, ‘You’re hiding behind the WWE and the World Boxing Super Series, the European Tour, and the Tennis Sports Cup. Those are all major events…The world will be watching this event,” said Hearn.

It’s still Hearn doing all the talking and not Ruiz Jr. and/or his management team that are speaking up. Until Ruiz speaks, a lot of boxing fans are going to remain skeptical about the rematch. Hearn says Ruiz Jr. is on board, but the fans won’t know for sure until he speaks up.

“There’s a press conference in two weeks. Both fighters will be there,” said Hearn about Joshua and Ruiz. “Saudi Arabia, London and New York. It’s quite right to ask certain questions. They wouldn’t be doing their job if they wouldn’t. All those questions have been satisfied. You’ll hear from Andy Ruiz in a day or so about the fight. He wanted it in a neutral country. He didn’t want to come to the UK. So you can’t moan about the UK, and then get your way and then moan about a neutral venue.

He [Ruiz] was given an opportunity from the Gods, and he pulled off a victory from the Gods, which he deserves. Be a man and honor the contract. That’s what he will do. That’s what his team will do. Tom Brown, Al Haymon, and all those people will deliver what they promised to. Yes, absolutely,” said Hearn when asked if there will be a lawsuit if Ruiz backs out of the fight. “Everyone knows that. That’s the standard procedure. Once he’s in litigation, he loses his belts,” said Hearn.

It’s debatable whether Saudi Arabia can be considered a neutral venue or not. Since Joshua is the bigger star worldwide than Ruiz, he’ll likely be treated as the uncrowned champion. Thing could get messy if Joshua is given preferential treatment from the judges and the referee.