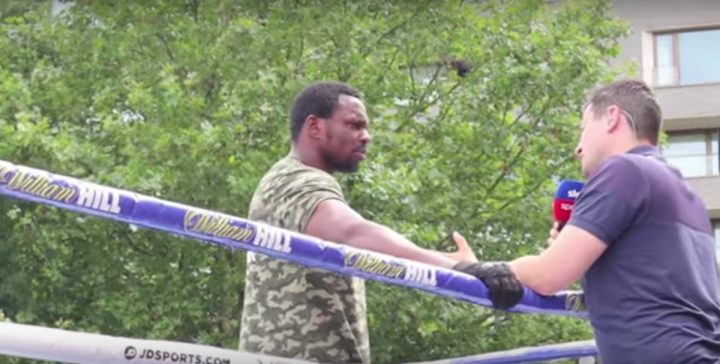 By Charles Brun: Dillian Whyte will get a chance to put himself in position to face the winner of the Deontay Wilder vs. Tyson Fury rematch by beating Oscar Rivas this weekend on July 20 on DAZN and Sky Sports Box Office. Whyte, 31, has been waiting for a title shot against WBC heavyweight champion Wilder since 2017, but he’s been ignored by him and the World Boxing Council.

Whyte (25-1, 18 KOs) will be battling it out for the interim WBC heavyweight strap against the undefeated #10 WBC Rivas (26-0, 18 KOs) this Saturday night at the O2 Arena in London, England.

The Colombian fighter Rivas, 32, is coming off of a career best 12th round knockout win over former heavyweight world title challenger Bryant Jennings last January. Rivas pulled a victory out of the jaws of defeat in rallying in the twelfth round to score a stoppage win over the 34-year-old New Yorker Jennings.

The sanctioning body was kind enough to place Whyte at #1 in 2017. However, when Whyte failed to take part in an eliminator against Luis Ortiz in 2018, he was stultified. Dominic Breazeale fought in a WBC eliminator and earned a title shot against Wilder, which he was given last May. Whyte chose to earn a title shot against Wilder the hard way by fighting whoever he wanted, and that didn’t workout nearly as well for him.

Hearn: Whyte has “faced all comers” to reach #1 with WBC

“Dillian Whyte has faced all comers in reaching his WBC No 1 position and now he stands just one more test away from a shot at the WBC world title – it’s all on the line this Saturday at The O2,” said Hearn to skysports.com. “We’ve been campaigning for this for a long time. There is one more hurdle to overcome in Oscar Rivas. I’m very happy that we have reached an agreement with the WBC and this makes Saturday night even more so important,” said Hearn.

That’s a bit of a stretch on Hearn’s part in saying that Whyte has faced “all comers” to make it get ranked #1 with the World Boxing Council. Obviously, Whyte (25-1, 18 KOs) didn’t fight the one guy that would have helped him earn the mandatory spot in Luis Ortiz.

Whyte could have saved himself a lot of time if he’d simply fought Ortiz when the WBC ordered him to last year. Instead of fighting Dereck Chisora, Lucas Browne and Joseph Parker, Whyte should have went along with the program and fought Ortiz.

Whyte did it the hard way, and it’s taken him longer because of it. He’s just lucky that this isn’t a strict sanctioning body. Would the IBF let Whyte get away with not fighting in a title eliminator to earn the mandatory spot? It’s doubtful. They probably wouldn’t agree with letting a Whyte’s promoter hand picked the opponent that they wanted him to face in Oscar Rivas either. Hearn is the one that selected Rivas for Whyte to fight for the interim WBC belt, not the WBC. They wanted him to fight Ortiz.

A defeat for Whyte against the unbeaten Rivas (26-0, 18 KOs) would mean that he wasted the last four years of his career fighting the wrong guys, and just spinning his wheels. The problem that Whyte has is he’s been dialed in to trying to earn a title shot against WBC champion Wilder all this time. Whyte has had a bad case of tunnel vision, only wanting the Wilder fight, and ignoring the more lucrative match against Anthony Joshua.

To a lot of boxing fans, they think Whyte has been too closed off to the fight that really matters against Joshua. Now the time that Whyte has put into chasing Wilder could go up in smoke if he’s beaten by Rivas. It’s unlikely to happen, because Hearn has vetted Rivas well, and he’s obviously sure that that Whyte can beat him. You never know though. Whyte’s stamina is horrible, and his chin is vulnerable, as we saw in his fights with Joseph Parker and Joshua.

Whyte comes into the fight with Rivas with a winning streak against these guys:

The opposition that Whyte has faced has been largely mediocre, fodder-level fighters. Given Whyte’s poor opposition, it’s surprising that the WBC chose to give him a #1 ranking. Overall, he’s not been fighting quality guys. Whyte probably would have lost to Parker if the referee hadn’t blown a knockdown call in round 2. That’s when Whyte rammed heads with Parker, knocking him to the canvas like a Billy Goat.

Hearn says part of the WBC’s resolution is Whyte will be given a title shot by May of 2020. There’s a very good chance that date will need to be extended. Wilder will want to fight the winner of the Anthony Joshua vs. Andy Ruiz Jr. fight straightaway rather than defend against Whyte. The WBC will NOT stand in the way of preventing Wilder from fighting in a unification match against the Joshua-Ruiz Jr. winner. That’ll be a tremendous fight. Whyte will end up having to wait a little bit longer for his title shot against the WBC champion.

Whyte complains that the top guys have been avoiding him

“These guys are always trying to find another way out of fighting me, as they keep doing,” said Whyte.

Is that really the case or is it simply Whyte choosing to make the wrong career moves? If Whyte wanted a world title shot, fighting Bacurin, Tann, Helenius, Lewison, Browne, Chisora and Parker wasn’t the right way to go about doing it. Whyte should have fought Luis Ortiz.