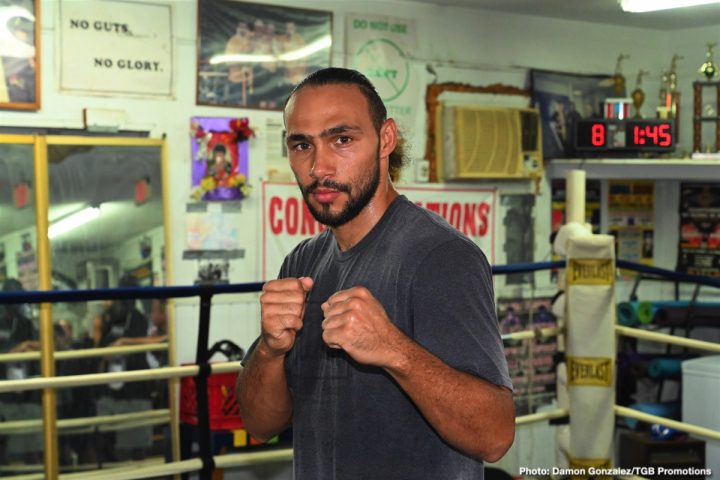 By Jeff Aranow: Keith Thurman views himself as the new Manny Pacquiao, and feels he’s taken over as the most “exciting fighter” in the welterweight division today. He puts himself in front of Errol Spence, Terence Crawford, Shawn Porter, Danny Garcia, and of course Pacquiao.

Thurman has only been back for one fight since his two-year layoff, and still too early to tell if he’ll be able to regain his form that he had during his best years.

Thurman (29-0, 21 KOs) points out that his fights against Danny Garcia and Shawn Porter were tremendously entertaining shows.  Thurman believes that his July 20th fight against Pacquiao (61-7-2, 39 KOs) will see the same type of performance from him. Given that Thurman edged Garcia, Porter and Josesito Lopez, he’s going to need a better performance to beat Pacquiao.

The only version of Pacquiao that Thurman can be compared to in a realistic way is the 40-year-old version, because he’s too shaky looking when he steps up against talented fighters. Thurman didn’t look Pacquiao-esque in his narrow wins over Danny Garcia, Shawn Porter and Josesito Lopez. Those were all close calls for ‘One Time’ Thurman in fights that weren’t anything like a vintage Pacquiao performance.  The way Thurman fought, he was like an old car that was laboring up a steep hill. Thurman made it up the hill in those fights, but just barely. He looked beatable in those three fights. Thurman’s poor punch resistance is a major flaw in his game that could limit his success.

“I think I’m the most exciting fighter in the welterweight division today. Not only did the (Lopez fight) might show some weakness and might give them a little bit of confidence, but outside of that, like (Leonard) Ellerbe mentioned, Keith Thurman has the best resume at 147. Two years out of the game and I still have the best resume at 147.”