Pacquiao – Thurman: Keith Thurman predicts he will KO Pacquiao in under six rounds 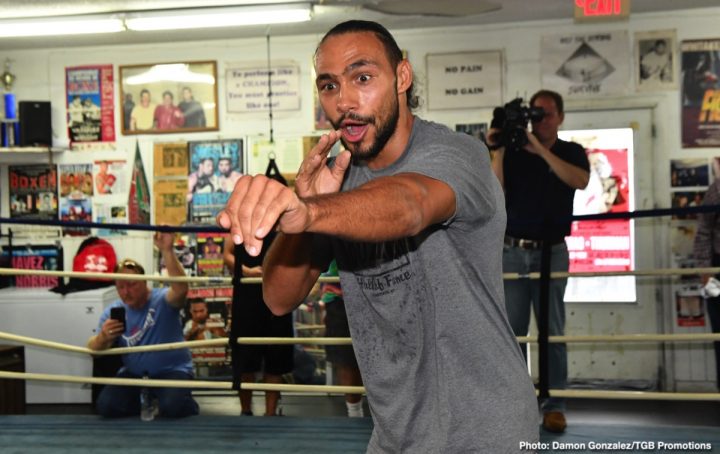 By Raj Parmar: At a media workout yesterday, undefeated welterweight champion Keith Thurman has made a bold prediction. “One Time” feels he will be able to finish off the legendary Manny Pacquiao when the two square off in just over a week.

The last time Thurman ended a fight before the final bell was four years ago against Luis Collazo. He has stated that he is hungry for a knockout and sees the opportunity against “Pacman” as the ideal time.

Manny is smaller than Thurman and is at the advanced age of 40. He is however coming off back to back wins and has been training very intensely for this fight. Pacquiao feels Thurman has disrespected him and is looking to hurt Thurman in the fight.

A lot of times fighters make early knockout predictions in order to sell the fight and generate hype, but when the fight actually happens they don’t try very hard for the early knockout. Fighters usually just want the victory versus the forced knockout and are more than happy with getting their hand raised knockout or no knockout.

Thurman however knows that a knockout win over Manny will do wonders for his career. If he does in fact finish off Pacquiao in impressive fashion, he can break into a new level of stardom as his record reaches 30-0. Even though Manny is not in his prime, having the legendary name on his resume will no doubt boost Thurman’s popularity.

Although Manny has been rumored to be doing a lot of damage to his sparring partners, Thurman is not worried at all. Thurman is insisting he will attack Manny’s body and this will lead to Pacquiao getting broken down and set up for a knockout.

We will see if Thurman can deliver on his prediction. If he is able to pull it off, it will be the signature win so far of Thurman’s career and he will find himself in a great position in the crowded welterweight division.