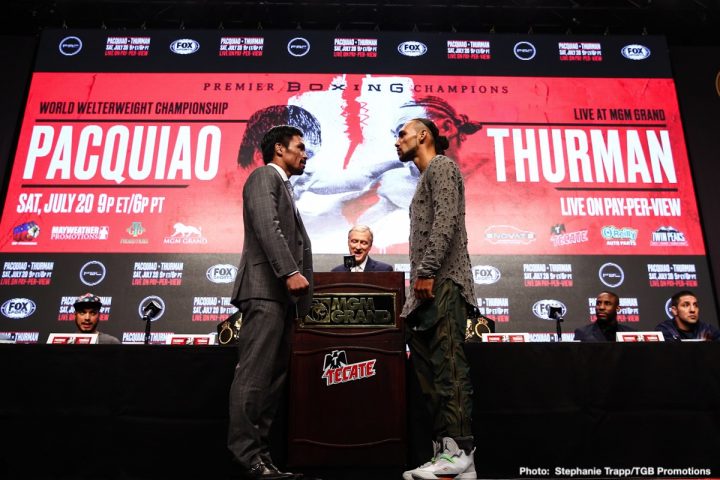 By Peter Axline: Keith ‘One Time’ Thurman says he wants to hurt Manny Pacquiao early, and get him out of there as fast as possible so that he can hit up the after party. Thurman (29-0, 21 KOs) says he can’t wait to stop dieting, and have some french fries and cheese cake. He says he’s been dieting for the last 10 weeks to make the 147 pound limit, and he can’t wait to have a good meal after he wins the fight on Saturday night.

Pacquiao (61-7-2, 39 KOs) and Thurman will square off on Saturday night on Fox Sports pay-per-view at the MGM Grand in Las Vegas, Nevada. The undercard is loaded with five excellent fights.

Here are the undercard fights for the Pacquiao vs. Thurman card:

Thurman wants to target Pacquiao’s midsection for his shots early

“I believe Keith Thurman will remain undefeated,” said Thurman in talking about his fight on Saturday night against Pacquiao. “In the opening round, I want to feel his power. I want him to feel my power. I want to hit him to the body. Is it hard to hit Manny Pacquiao’s body? Is it because he’s so small? When he ducks down, now he’s even smaller. Is it difficult to get to Manny Pacquiao’s body? I’m not too sure about that. I will find out. He’s 40-years-old. How is he going to feel when I land those shots on his body? My ring IQ told me something to look out for [body punching], is something that can be an additive to my game. Ultimately, I think there’s a lot of holes in Manny Paquiao’s fighting style,” said Thurman.

Thurman wants to test whether Pacquiao’s body is a vulnerable spot for him to try and take him out. Pacquiao was stopped in the third round by a body shot from Rustico Torrecampo in February 1996. Torrecampo was nothing special as a fighter, but he was able to destroy the young 17-year-old Pacquiao. Torrecampo was 24-years-old at the time. If Thurman goes to the body, he’ll leave his head open for Pacquiao to nail him with left hands. It could be dangerous for Thurman to focus on going to the body, because he could get stopped like Ricky Hatton did against Manny. Hatton tried to throw body shots, and Pacquiao knocked him out in the second round in 2009.

“He’s a tremendous fighter. He has the heart of a real champion,” said Thurman. “He’s going to keep coming, but if we land those big punches, especially if he jumps into it, it multiples the velocity of his in and my out, it’s over. That’s the plan,” said Thurman when asked if he’s going to fight big against Pacquiao like Jeff Horn did in his controversial win over him in 2017. “Jeff Horn was a real welterweight.”

“I feel Manny Pacquiao had problems, and Jeff Horn is not the most skilled. We saw that when he fought Bud Crawford. It was as if he didn’t really know how to fight a skilled southpaw. Manny Pacquiao was small, and he [Jeff Horn] was able to force dominance over him. I want to see if I can get it over with, and then go to the after card,” said Thurman.

The constant talking by Thurman about him wanting to go to the after party, and eat fattening foods makes one wonder whether he’s already semi-retired. When fighters make millions, like Thurman has, they get a taste of the soft life. It’s hard for them to back to the daily grind of being a boxer, which isn’t an easy life. Thurman had two years of the soft life when he was out of boxing from 2017 to 2019, and he clearly got used to the soft living. That may be the explanation of why Thurman looked so poor in his “get back” fight against Josesito Lopez last January.

When a professional athlete takes their foot off the accelerator for two or more years, they’re sometimes not the same when they come back.  Thurman may never be the fighter that he once was. If his performance against Josesito is as good as it gets for ‘One Time’ Thurman, then Pacquiao has an excellent shot at beating him on Saturday night.

Pacquiao can be hurt says Thurman

“In rounds 5, 6, 7 and 8, I’m going to change the pace, and I’m going to box,” said Thurman. “I’m also going to assess round by round how the judges are looking at the fight. Do I need to do more? Can I do less? The real fun part is when I get to punch him in the face. I can’t wait until that part. It’s coming soon. The thing about Manny Pacquiao is he has experienced it all. He’s won big fights, he’s lost big fights, and he’s been knocked out. He’s been robbed in fights.”

“There’s nothing he hasn’t been through. Obviously, it’s going to give a fighter confidence in himself. I believe I have what it takes to hurt Manny Pacquiao. He’s a southpaw. I’m taking that into consideration. He’s smaller than me,” said Thurman.

Thurman: I can eliminate Pacquiao’s punch output with movement

“He does have hand speed. He does like to throw a bunch of punches,” said Thurman. “I believe I can take away his output with my movement. But that’s not really how I want to win the fight. I want to make the fight a short fight. I want to end it quick, and then go and do the opposite of what I’ve been doing for 10 weeks, which is diet and exercise. I just want to go and have a good time, and hit the after party and enjoy myself. Have some cheese cake, and french fries,” said Thurman.

There’s Thurman talking about rich, calorie-dense foods again. The way Thurman goes on about food, there’s going to be a point of no return where he’ll eat himself out of the welterweight division. With the major food restrictions that Thurman has had to deal with to make weight for the Pacquiao fight, it’s quite possible that it’s going to impact his performance. That might be part of Thurman’s problem in his last fight against Lopez.

Thurman’s weight is a problem

Before Thurman started training camp, he looked puffed up like a short, fat super middleweight. He was huge. Having to shed all that weight to get down to 147 probably took a lot out of One Time Thurman. For any of the readers that have ever dieted down 25 to 30 pounds, they’ll know that they didn’t feel powerful losing that weight. Thurman’s problems right now are likely more to do with how fat he’s been getting in between fights. A fighter can only do that yo-yo thing with their weights a limited amount of times before it starts to negatively impact their performances. We saw that with Ricky Hatton, Fernando Vargas and Riddick Bowe, and now we’re seeing it with Thurman.

“They don’t believe in Keith Thurman, because Keith Thurman was two years out of the ring,” said Thurman when reminded that he’s considered the underdog in the eyes of a lot of boxing fans. “They saw me get hurt. They saw me get hurt in my last fight, and they just feel like they saw the body shot. They seen so much in there like, ‘someone has got to beat Keith Thurman. I know they’re going to beat Keith Thurman.’ But if Keith Thurman was fighting Manny after he beat Shawn Porter and Danny Garcia, I guarantee you it would be the reverse. Nine out of ten saying, ‘Thurman has it,’ and all of a sudden it’s changed. It’s alright. I’m going to remind you all who I am,” said Thurman.

In this case, Thurman is probably right about the boxing public writing him off based on his last performance against Josesito Lopez. That’s how any profession goes. Your employer will judge you on how you perform on a daily basis. They’re not going to ignore you’re gold-bricking now, and focus on how great you were in the past. You get judged on how you’re performing each day. It really doesn’t matter how Thurman used to perform in the past two years ago. That Thurman is gone. The Thurman that now exists has shown that he has a chin and stamina problems. It’s doubtful those problems are going to improve for Thurman’s next fight against Pacquiao.

Thurman says he’s going for the knockout of Pacquiao

“I’m definitely going for the KO,” said Thurman. “This may be the best fight of the year. I want to knock him out as soon as possible. I want to know his weaknesses right off the bat. If he jumps right at me, and doesn’t take his time, I get to know what’s really good. When you trade, both fighters are open to getting hit with big shots. For me, it’s an opportunity to put hands on a legend. I hope he brings the fight, because I’m going to bring the fight,” said Thurman

Going for a knockout would be a wise thing for Thurman to do, because if he can get rid of Pacquiao early, he won’t have to worry about him in the later rounds.

“I want to push Manny Pacquiao backwards,” said Thurman. “So if he comes at me, and tries to get me on my back foot, that’s not a problem. Keith Thurman fights well on his back foot. I didn’t like his performance against Jeff Horn. His performance against Adrien Broner and Lucas Matthysse, in those two, he was moving forward constantly. His strong point is when he’s moving forward from round one. Knockouts for life,” said Thurman in saying what his motto is.

What we saw in Thurman’s fights against Danny Garcia, Shawn Porter and Josesito Lopez is he doesn’t have the engine to push back his opponents for an entire fight. Thurman can briefly push them back, but then he either gets tired or scared, and takes off running.

Arum says Pacquiao should be careful at his age

“What I saw was any fighter that gets in his 40s is at risk for brain damage,” said Pacquiao’s former promoter Bob Arum of Top Rank Boxing to Fighthub. “It’s not something I’m making up. That’s something the medical people will tell you. Whether that applies to Manny Pacquiao, I don’t know. I haven’t examined Manny Pacquiao. I’m just saying at his age that becomes a problem. It’s not that it’s definitely a problem for Manny Pacquiao. All I know is his cranium can be the same as a 20-year-old guy.

“Certain guys like [George] Foreman could get hit in his 40s, and [Julio Cesar] Chavez was another one. So it’s possible. But look at Zab Judah. I’ve seen it. The guys that fight into their 40s run a serious risk of brain damage. The way they speak afterwards, and whole punch drunk syndrome. But I’m not saying Manny Pacquiao is going to be hurt in the fight. I don’t know that. But at his age, I’d be very, very careful,” said Arum.

There’s nothing magical about 40 being the cut off date for old age, as boxers go. Look at Bernard Hopkins, for example. He was still fighting at a high level at age 48. In Pacquiao’s case, his hand speed is so far ahead of his opponents, that he can still compete with the best now that he’s in his 40s. He’s obviously lost some of his hand and foot speed, but he’s still much faster than his opponents. That includes Thurman.