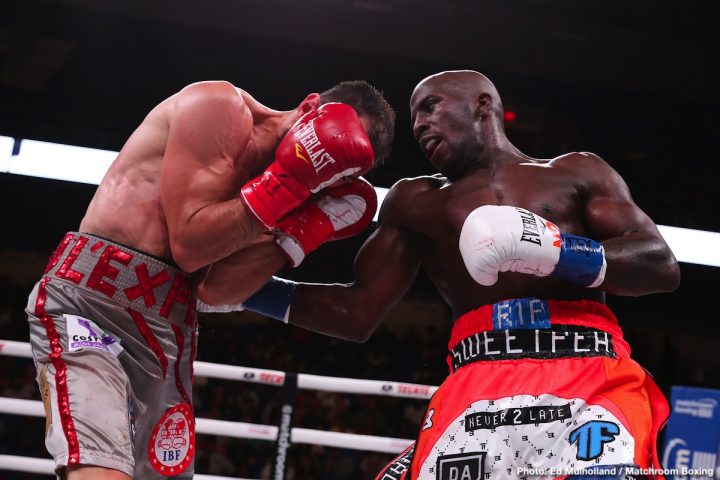 By Mike Smith:  Tevin Farmer (30-4-1, 6 KOs) made it clear last Saturday night that he wants a unification fight next against WBA Super World 130 pound champion Gervonta ‘Tank’ Davis if possible. The 28-year-old Farmer  did what he had to do in successfully defending his IBF super featherweight title with a solid win over his mandatory challenger Guillaume Frenois (46-2-1, 12 KOs) in the co-feature bout on DAZN at the College Park Center in Arlington, Texas.

Farmer fought a safety first fight in boxing his way to a wide decision over the 35-year-old Frenois, but took few risks in winning a one-sided 12 round decision. Moments after the fight, Farmer was showered with boos by the fans at the College Park Center, as they let him know that they didn’t appreciate his lack of willingness to put himself at risk.

Farmer’s promoter Eddie Hearn of Matchroom Boxing admitted that Tevin didn’t fight in the most “entertaining” manner, and he wished he’ taken the fight to the French fighter Frenois.  Farmer said he didn’t care that the fans were booing him, and that he wanted to win, and go home to his family afterwards.

Tevin Farmer says he didn’t care about the crowd

“My hand is always messed up,” said Farmer after his win over Frenois. “I do what I got to do. I came in here, I fight and win, and I keep winning. Yeah, I did an excellent 12 rounds. I came in shape, and I fight all 12 rounds. But, I don’t care about the crowd,” Farmer said in responding to all the boos he was getting from the boxing fans at the College Park Center in Arlington. “I come in here; I fight, I win, I get paid, and I go home to my family. You’re either going to love me or you’re going to hate me. I don’t care. I did it with speed, and it was my IQ, and I think my speed and IQ won the fight tonight,” said Farmer.

Frenois lacked the punching power to give Farmer anything to worry about inside the ring last Saturday night. That made it easy for Farmer, 28, to move around the ring, jab, and pick his spots to land his quick power shots without worry of getting hit back. Frenois hadn’t done much to earn the title shot against Farmer before tonight. In Frenois’ last fight, he’d fought to a 12 round draw against former Farmer victim Jono Carroll last December.  Frenois had also lost to Devis Boschiero in the past. His wins had largely come against obscure opposition with limited talent. The World Boxing Association still felt that Frenois had done enough to deserve a #3 ranking with their organization. Many fans would disagree, especially after seeing Frenois’ performance last Saturday night.

“It can’t be made, because he says one thing; he says he wants me, but the people behind him say something else,” said Farmer when asked if he wants to fight WBA Super World super featherweight champion Gervonta ‘Tank’ Davis next. “Gervonta says he wants Tevin Farmer, but [Mayweather Promotions CEO] Leonard Ellerbe says, ‘I’m going to move Gervonta the way I want to move Gervonte.’ Let’s read between the lines. Eddie [Hearn] has sent them multiple offers, saying that Tevin Farmer wants the fight,’ and it’s constant excuses. So, I’m moving forward from them. I’m moving forward from that fight. If it happens, it happens. If it don’t, I don’t give a damn. I want all the world champions out there. [Miguel] Berchelt, Jamel Herring, a shout out to him. Who else? Gervonta Davis. But if I can’t make them fights, give me Joseph Diaz,” said Farmer.

Farmer brings up a good point about Mayweather Promotions not wanting to make the fight between him and Gervonta Davis. Before last Saturday night, there was already talk that Gervonta would be facing former WBA featherweight champion Yuriorkis Gamboa in his next fight if the two of them won their respective contests on the same card in Baltimore. Davis destroys Ricardo Nunez in two rounds, while Gamboa took care of former WBO super featherweight champion Roman ‘Rocky’ Martinez in two rounds as well.

Gervonta’s management not talking about fight with Farmer

If Tank Davis’ management wanted to make the fight with Farmer next, they would have been talking about that fight. Instead, it looks like Gervonta will be fighting the 37-year-old Gamboa next, and after that could see Tank fight past his prime former three division world champion Abner Mares. Mayweather Promotions aren’t taking any chances with Tank for some reason.  Gervonta vs. Mares would be a fight that would be aimed at the casual boxing fans, because the hardcore fans see that fight as a poor mismatch.

“He was a legend in the sport. God bless his soul,” said Farmer about the recent passing of boxing great and former world champion Pernell Whitaker. “Boxing is a dangerous sport. I don’t think fans appreciate fighters. They give a lot of fighters hell. They don’t know what fighters are going through in training camps. We spar hundreds of rounds, and we get hurt in training too, and then come into a fight and box 12 rounds against fighters that hit very hard with eight-ounce gloves and no head gear. We can die in the ring, and I don’t feel like they appreciate us. So my motto is to go in there and do what’s best for you, and go home to your family. Those fans are going to be around when you’re dead or alive,” said Farmer.

Farmer fought in an even more safety first manner than he had in the past last Saturday. That’s why Farmer was booed loudly afterwards. His little speech about how fighters aren’t appreciated by the boxing fan didn’t go over well either. The fans want to see entertaining fighters, and Farmer played it safe against a guy with no power in Frenois.  If and when Farmer steps it up against Gervonta, Miguel Berchelt or Jamal Herring, he’s going to need to be a lot more aggressive if he wants to beat those types of fighters. Farmer isn’t going to be able beat them by decisions by fighting carefully like he did against Frenois.

“I had the WBA belt and I had the IBF belt,” said Davis. “Tevin Farmer fought tonight. I want Tevin. That’s a fight that can be made. Let’s get it on later this year.”

WBA super featherweight champion Davis (22-0, 21 KOs) called out Farmer after stopping Ricardo Nunez (21-3, 19 KOs) in the second round last Saturday night on Showtime World Championship Boxing at the Royal Farms Arena, in Baltimore, Maryland. Davis might have been wasting his time in calling out Farmer. Gervonta needs to talk to his promoters at Mayweather Promotions rather than waste time calling out a fighter that they have no intention of matching against. Davis needs to be on the same page as his promoters, because the guy that they want to match him against next is Yuriorkis Gamboa, not Farmer. To build interest in the Davis-Gamboa fight, Gervonta should have used his interview time with Showtime to tell the viewing audience he wants to fight Gamboa next.

“I thought he won comfortably,” said Matchroom Boxing promoter Eddie Hearn to IFL TV about Farmer. “It wasn’t the most entertaining fight in the world. I think Tevin needs a challenge now. He’s a true pro. He trained hard for this fight, but he had no choice but to take the fight as a mandatory. I think he needs to be tested. I think he’s going to be tough to beat, I really do. If it’s [Miguel] Berchelt, or even it’s [Gervonta] ‘Tank,’ they’re all top fighters, and he has the ability to take his game to another level, especially against an aggressive fighter. Frenois game to win, but he really didn’t stick it on him too much. He was a little bit out of his depth,” said Hearn.

You can tell from Matchroom promoter Eddie Hearn’s comments that he wasn’t too excited at the performance by Farmer.