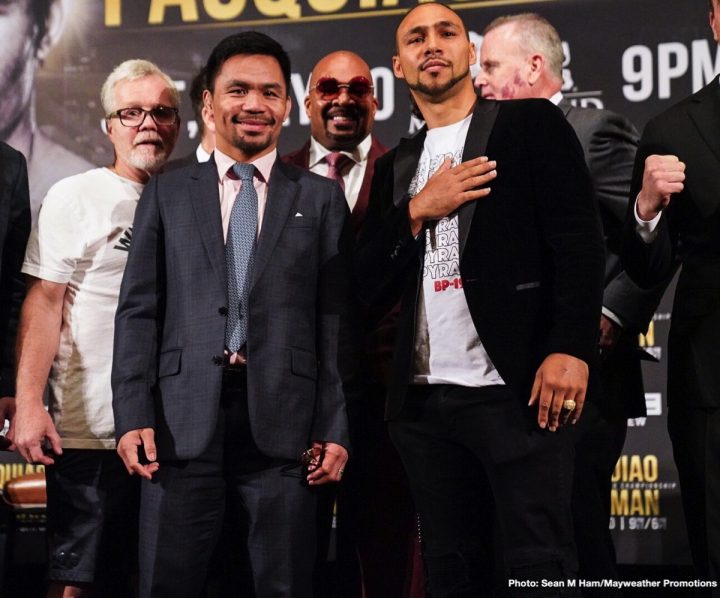 By Jeff Aranow: Trainer Freddie Roach says Keith Thurman’s inactivity over the last couple of years has hurt his game to the point where he’s going to lose against Manny Pacquiao in their fight in a little over two weeks from now on July 20.

Thurman not the same fighter he once was

There are more than a few boxing fans that feel that Thurman (29-0, 20 KOs) is nowhere near the same fighter he was three to four years ago. A combination of inactivity, injuries, and outside interests have taken a lot from his game. Roach sees the same deterioration in the 30-year-old Thurman that others have. Thurman fans believe that the only reason he looked bad in his last fight against Josesito Lopez last January was due to the two-year layoff that he had from 2017 to 2019, but there were signs of physical decline in Thurman that go far beyond just ring rust. One Time Thurman looks older than his chronological age of 30. Physically, Thurman resembles a fighter closer to 36 or 37 than he does 30, and that’s not good. He’s not going to be able to age backwards like Benjamin Button from the Brad Pitt movie.

“Thurman talks a good game but we’ll see if he can cut the mustard with Manny on July 20,” said Roach. Manny is 10 years Thurman’s senior and yet this will be Manny’s third world championship fight over the past 12 months. Activity keeps fighters sharp. The lack of activity explains why Thurman has looked worse and worse over his last three fights,” said Roach.

Pacquiao is in a good position to take advantage of the deterioration that Thurman is showing in his game, but he’s going to need a good set of wheels. Thurman is going to be using as much movement as possible to evade Pacquiao’s blistering fast shots, especially once he starts tasting his punches. When Thurman starts getting hit, his natural instinct will be to move away from Manny to keep him continuing to land his shots. Thurman’s last opponent Josesito Lopez had him hurt, and on verge of a knockout. But Thurman used his legs to get away from Lopez, and avoid him for the remaining five rounds of the fight. Pacquiao would need to stay on top of Thurman, and not let him escape the pressure.

Thurman is fighting as little as possible says Roach

“He just seems to be fighting as little as possible to keep his title,” said Roach about Thurman. “Manny will sizzle and Thurman will fizzle when they battle it out in the ring at the MGM Grand on July 20.”

Thurman already lost his WBC welterweight title due to inactivity from being out of the ring for 2 years. For some reason the World Boxing Association allowed Thurman to keep his 147 title during those two years. It’s unclear how man years the WBA allows their champions to stay inactive before they finally strip them of their titles. It obviously can’t be a good thing for the contenders in the WBA’s rankings. If you’ve got a fighter sitting outside of the ring for years and years, it freezes the careers of the contenders, who have to wait for the champion to return to the ring before they can get a shot at his belt.

The WBA gave Thurman a big break by not stripping him of his title after the first year of inactivity. Even six months would seem like long enough for a champion to be stripped of his title if he’s inactive. Two years is unheard of.  Thurman arguably shouldn’t be a belt holder at all unless you want to call him a ‘lineal welterweight champion.’ The whole lineal thing is a mess. It just causes more confusion and watering down of the weight classes with useless titles.