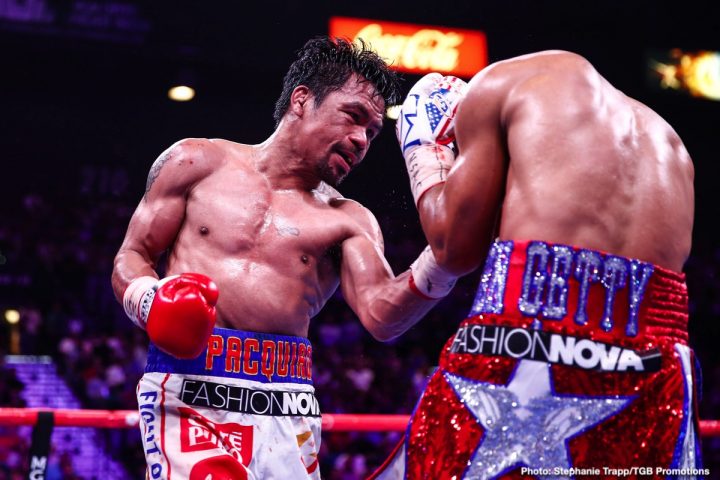 By Peter Axline: Freddie Roach say Manny Pacquiao’s target opponent for his next fight is a rematch with Floyd Mayweather Jr. He wants that fight, because he was embarrassed by losing to Mayweather four years ago in their ‘Fight of the Century’ in 2015. Pacquiao is coming off of an impressive 12 round split decision win over Keith ‘One Time’ Thurman last Saturday night in Las Vegas, Nevada.

Roach says Thurman (29-1, 21 KOs) fought well enough to deserve a rematch, but that’s not the fight that they want. Mayweather is the guy right now that Manny has in mind, but Roach wonders whether he scared Floyd off with his win over Thurman. Mayweather, 42, likely would have lost if he it had been him facing Thurman last Saturday.

The big right hands that Thurman was landing on Pacquiao would have done damage to Mayweather, who has been living a soft life of a multi-millionaire since retiring in 2015. Mayweather would likely have been hurt if he’d eaten as many right hands from Thurman that Pacquiao did.

Roach attributes that loss for Pacquiao on him fighting with an injured right shoulder that he hurt four weeks before the end of training camp. Due to the severity of the injury, Pacquiao couldn’t spar in the last four weeks of camp, and they were forced to send their sparring partners home. Mayweather was well aware of Pacquiao’s injury, as seemed to know what was going on during his training camp. There was a mole inside the camp that relaying information to Mayweather.

Freddie says he wanted Pacquiao to postpone the Mayweather fight rather than take it with the injury, but the match took place anyway. Given that Pacquiao needed surgery to fix his right shoulder, it would likely taken too much time to heal. Even after the surgery, Pacquiao’s right shoulder wasn’t back up to top form for several fights. He’s now punching with a lot of power with his right arm, but it’s four years later. Mayweather is nowhere to be seen. He’s now focused on fighting MMA fighters in boxing matches. It doesn’t seem to bother Mayweather that he’s not able to make the same kind of money he could make fighting Pacquiao. It all about making easy money.

“I’m not sure. Mayweather seems to be a little evasive,” said Roach when asked by PBC if they believe that a fight between Mayweather and Pacquiao can happen next. “He was real quiet. He didn’t stay at the [Pacquiao-Thurman] fight after the decision was announced and call anyone out like he usually does. I think Manny scared him a little with that performance. Money has nothing to do with it,” said Roach when asked if Pacquiao’s overriding desire in fighting Mayweather again is for the money.

It seemed odd that Mayweather slipped out of the MGM Grand Arena last Saturday night following Pacquiao’s victory over Thurman without agreeing to fight him. Mayweather was just there at the fight as a fan, and not try and setup a fight. That’s a sign of respect that Mayweather isn’t pushing for a rematch with Pacquiao, because he’s basically saying that the risk is so high that he’s willing to walk away from a $100 million+ payday. That tells you a lot about Mayweather. He obviously doesn’t fancy his chances of beating Pacquiao, because if he did, he would have likely jumped into the ring and challenged him.

Pacquiao was embarrassed that he lost to Mayweather

“He was embarrassed that he lost to Mayweather,” said Roach. “He can do do much better. We did have an injury going into that fight, and we thought that was going to be taken care of right. The injury is all better now, and Manny is getting back to where he once was. I just think he’s a much better fighter now than ever. The [shoulder] injury occurred four weeks before the [Mayweather] fight. He had to send all his sparring partners home. We couldn’t even spar at the end of training camp. My goal was to cancel the fight, but everyone else said we can’t,” said Roach.

Roach says Pacquiao was embarrassed by the loss to Mayweather, and that’s the overriding reason he wants to fight him again. The money obviously is the icing on the cake to make it even better. There aren’t any other big names for Pacquiao to fight right now. IBF welterweight champion Errol Spence Jr. and WBO champ Terence Crawford aren’t highly popular fighters despite having loads of talent. What made Thurman such a great opponent for Pacquiao was his showmanship. He’s easily the best trash talker in the 147 pound division, and he arguably is the most charismatic. If Pacquiao can’t get the rematch with Mayweather, he might be better off facing Thurman again. A second Thurman fight would still attract more interest than if Pacquiao were to fight Spence or Crawford.

Pacquiao vs. Mayweather rematch will be a different story

“I guarantee it,” said Roach when asked if the rematch between Pacquiao and Mayweather goes differently than the first fight. “I’m a trainer. As a trainer, I give Manny much better conditioning, and a much better place than the first fight. I do think that’s a fight [Mayweather] that he wants really badly. I told Manny, ‘if we fight this guy [Mayweather] one more time, beat him, and then retire,'” said Roach.

It goes without saying that a rematch between Pacquiao and Mayweather would be a different fight. It wouldn’t be easy, because Mayweather would still be smart, but without his hand speed, he would have problems against Pacquiao. Mayweather looked really slow in his last two fights against MMA fighters Tenshin Nasukawa and Conor McGregor. Floyd is no longer blazing fast, and that means he would be at the mercy of Pacquiao’s shots. It’s very likely that if Mayweather took the rematch with Pacquiao, he would end up like Sugar Ray Leonard when he came out of retirement and fought Hector Camacho.

“It was a great fight. He may deserve a rematch, because it was a great fight,” said Roach about Thurman deserving a rematch against Pacquiao. “I think Manny’s mind is on Mayweather right now. That’s the ultimate fight for us right now. At the post-fight press conference, I was a little worried about him, because he was having some trouble with his vision, and I wouldn’t to take him to the doctors,” said Roach about Pacquiao after his fight with Thurman. “He refused to go in. I was a little worried about the fight. I just wanted to make sure everything was okay. When I saw him the next morning, he was up shadow boxing. It was the old Manny. He was as sharp as a tack, talking very sensible. After the discussion with Manny, I was in a much better place,” said Roach.

Pacquiao can’t afford to wait too long for Mayweather before picking someone else out if Floyd doesn’t want to fight him. Manny wants to fight before the end of the year, and that means he needs to start looking at potential options right now. The winner of the Errol Spence Jr. vs. Shawn Porter is a possibility, and so is Danny Garcia or Mikey Garcia. Fighting one of the Garcia makes good business sense for Manny. Amir Khan is interested in fighting Pacquiao on November 8 in Saudi Arabia, and there might be good money to be made in that fight. There’s less cache for Pacquiao to get in fighting Khan than one of the other guys, but it’s potentially a good payday for Pacquiao. He would have to deal with Khan’s hand speed, which is still quite fast.

Pacquiao was pressured to take days off

“With this training camp we let him take off days,” said Roach. “We made him take days off, which we almost never did in the past. He would just never take one. He’d take a day off, and come to the gym and feel good. The off days really started to settle in with him. To get Manny Pacquiao to take days off was really difficult, but that worked really well in this training camp. I definitely wanted the off days, and Justine Fortune was pushing for it, the strength coach. Between the two of us, we didn’t have to tie Manny up or anything, but we got him a day off,” said Roach.

It’s a good thing Pacquiao didn’t wear himself out in this training camp, because he’s looked worn in some of his fights recently. Still pushing himself to training every day is the wrong approach at his age.

Roach was waiting for Pacquiao’s second wind to kick in

“I was just waiting for his second wind to catch in, because he did get a little fatigued in the middle rounds, and I was worried he was taking too many shots in those rounds,” said Roach about Pacquiao tiring. “He got hit with a couple of big right hands. He took them well, yes, but no one wants to take punches.

To go after him early; he had him [Thurman] hurt, and Manny’s killer instinct seems like it’s coming back. I’m so happy about that. The instructions were, ‘Let’s go.’ I expected him to be a little bit more aggressive . When the body shot came in the 10th round, that was a really good turning point too. I think he was closer to stopping him in that round, then he was in the first round. The middle rounds, Thurman did well,” said Roach.

Pacquiao’s performance was close to his best

“Pacquiao picked it up at the end. I thought the ending was good enough for Manny to win a unanimous decision,” said Roach. “But when the split decision came, it was something we had to live with. That judge is a very good judge. He has a very good background. I’m not a judge. I’m a bad judge actually. He’s had a lot of great performances,” said Roach about Pacquiao. “This one came at a good time though. He’s 40-years-old, and he was fighting an undefeated champion [Thurman] with no losses, and he beat him soundly. It was a great performance. It may not be the best performance he’s ever had, but it was very close,” said Roach about Pacquiao’s impressive win over Thurman. 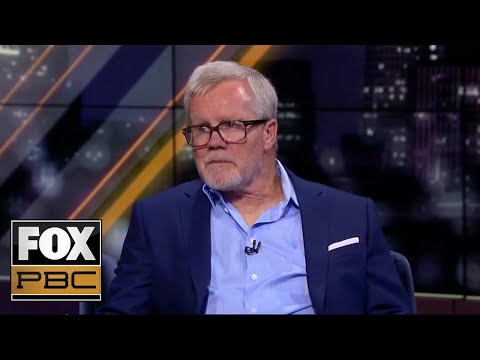