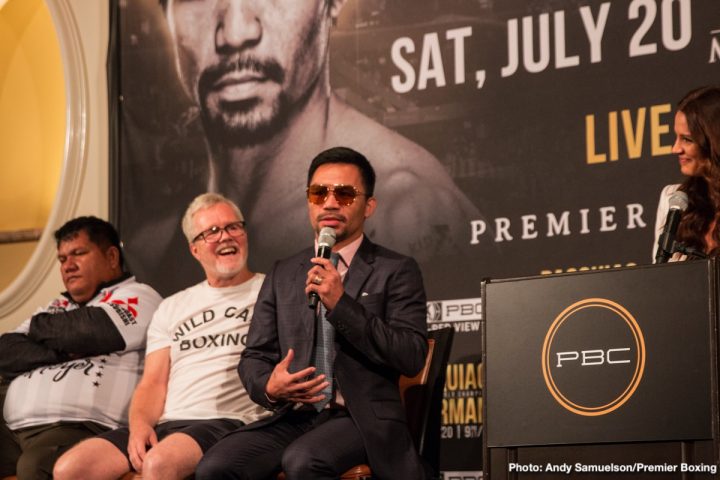 By Jim Dower: Leo Santa Cruz says Manny Pacquiao’s confidence isn’t the same since his knockout loss to Juan Manuel Marquez seven years ago, and he believes he’s going to lose to Keith ‘One Time’ Thurman on July 20. Santa Cruz thinks Pacquiao has lost his nerve. The courage isn’t there anymore for the former eight division world champion, and that’s bad news for him going up against the #1 welterweight in the division in ‘One Time’ Thurman.

Pacquiao has become cautious since Marquez knocked him out cold in the sixth round in December 2012. The loss effected Pacquiao (61-7-2, 39 KOs)  in way that it made him less aggressive, and unwilling to take risks like he used to do in the past.

What Santa Cruz fails to say is Pacquiao would have problems with Thurman’s punching power and size even if he fought with the same reckless abandon that he had in the distant past. Thurman is a much bigger fighter than Pacquiao, and his power makes this a really tough match-up for the Filipino star. It would be the same thing for Thurman if were to move up in weight to division where he’s smaller than all of his opponents. He would do well against some of the fighters, but he’d eventually run into a guy that would torpedo him with power shots.

“It’s a good fight, but I pick Thurman,” said Santa Cruz to Fighthub in picking ‘One Time’ to beat Pacquiao. “He’s stronger, and Pacquiao is getting old. Also, his confidence [isn’t the same]. Before he got knocked out by [Juan Manuel] Marquez, he used to fight like he wasn’t scared. He would go out and brawl. Now since he got knocked out, he’s more cautious. He doesn’t jump in as much. I don’t think he’s been the same since,” said Santa Cruz.

Thurman is the logical pick for anyone to make in this fight, because Pacquiao is so much older at 40-years-old, and he lacks the size to win. With the aggressiveness that Manny had a decade ago, he would have a fair shot at beating the undefeated WBA Super World welterweight champion Thurman (29-0, 22 KOs), but not now. The smart pick is to go with the 30-year-old Thurman, because he’s looking like a full-fledged middleweight right now in training camp.

Keith isn’t dropping weight either. He’s working on building even more size an strength to use against Manny on July 20 in their fight at the MGM Grand in Las Vegas, Nevada. Thurman will dehydrate the week of the fight, and then balloon up to over 160+ pounds on the night of the fight to crush Pacquiao with his size advantage. At best, Pacquiao will be around 147 pounds on the night of the fight. Thurman could have close to a 20 pound weight advantage over Manny on the night of the fight. Having a 20 pound weight advantage would be a lot even at heavyweight, but at welterweight, it’s a massive size advantage that Thurman will be enjoying over Pacquiao. Thurman’s metabolism has slowed down with his two years out of the ring, and he’s so huge right now for a welterweight.

“He’s still doing everything, but it’s not the same as before he got knocked out,” said Santa Cruz. “Thurman is really strong. I think if he lands a big punch, he can knock him out. Pacquiao is able to take a good punch. Marquez caught him right on the button, but I think he’s able to take a good punch. So I think he’s going to go the distance,” said Santa Cruz.

There’s no question that Thurman could do the same thing to Pacquiao that Juan Manuel Marquez did seven years ago. Thurman is a bigger puncher than Marquez was with either hand, and he’s facing an older Pacquiao now. This isn’t the same Manny that Marquez fought in 2012. He’s older now, and has a lot more ring wear on him.

News:
Thurman reacts to Fury being the FAVORITE over Wilder

Pacquiao does take a good shot, as Santa Cruz points out, but he’s not fought a big puncher since his fight with Miguel Cotto in 2009. Since then, Pacquiao has fought guys with average power like Adrien Broner, Jeff Horn, Jessie Vargas, Chris Algieri, Floyd Mayweather Jr., Antonio Margarito, Joshua Clottey, Brandon Rios, Marquez, and Shane Mosley. Those guys don’t have the same kind of punching power that Thurman possesses.

“I think it could be a great thing or a bad thing for Thurman,” said Josesito Lopez to esnewsreporting about his fight against Pacquiao. “He showed a lot. He showed his championship caliber, because to be able to survive after a round like that, you really have to have a championship mentality or you can see it the other way,” said Lopez about Thurman making it through the seventh round of their fight after being hurt. “He took a really hard punch. Most people won’t react the same way after that. We won’t know until we see, but I think it’s going to be a really great fight,” said Lopez.

Lopez hurt Thurman in the seventh round with a left hook to the head six months ago in January. Josesito points out that a lot of fighters aren’t the same after they get hurt the way Thurman was, and he wants to see if he can still take a good shot without going down. Lopez missed his opportunity to get Thurman out of there due the round ending before he could finish him off in the seventh. In the remainder of the fight, Thurman got on his bike, and stayed on the move to keep from getting clipped again.

“I’m leaning a little towards Pacquiao,” said Lopez. “Nothing against Thurman. He’s a really good fighter, but I think it’s going to be competitive. I just want to see how he reacts after getting hit by a couple of power punches by Pacquiao. He didn’t react too well when I fought him, but we’ll see when he comes against Pacquiao,” said Lopez.

Josesito is likely making his pick of Pacquiao based on how Thurman looked against him, but it’s going to be a different situation on July 20, Thurman has had his “get back” fight fight against Lopez after two years out of the ring, and he’ll probably be in a lot better form against Pacquiao. The tired looking Thurman that fought Josesito won’t be there for Pacquiao, because he’s got the ring rust off, and he’ll be ready to take the fight to the 40-year-old star. Pacquiao doesn’t have the punching power that Lopez had going for him when he fought Thurman, and that’ll make a big difference.

“I heard Adrien Broner is looking for an opponent, but I don’t think he wants that,” said Lopez. “I’m just staying in the gym and staying ready for the call.”

Broner vs. Josesito would be an excellent fight, but that match-up isn’t likely to happen. Adrien is going to be looking for a bigger name for his next fight, because there’s too much for him to lose in a bout against Josesito. Broner’s career won’t be hurt if he loses to a bigger name fighter. He can absorb losses to the top guys, but he can’t take a loss to a fringe level fighter like Lopez without it hurting his viability as a B-side player for the elite guys.

This fight isn’t likely to happen yet. Top Rank promoter Bob Arum said today that Kovalev is probably going to be defending his WBO light heavyweight belt against his mandatory Anthony Yarde on August 24. If a fight between Canelo and Kovalev is to take place, it’ll be in December.

“Good, he needs it,” said Lopez when told that Anthony Joshua is working on his head movement in preparation for a rematch against Andy Ruiz Jr. “Andy Ruiz, that’s a tough cookie. He boxed in the amateurs. He’s seen a lot. He’s seen all the styles. Size doesn’t matter, because at heavyweight…He’s always been the smaller one. He’s been the Josesito. I’ve always been the small guy going up against [bigger fighters]. I think it might be the same thing,” said Lopez in talking about the Joshua-Ruiz Jr. rematch. “As much as I like Joshua, it might be the same thing.”

It makes a lot of sense what Josesito says in discussing the rematch between former IBF/WBA/WBO heavyweight champion Anthony Joshua and Andy Ruiz Jr. Without a doubt, Joshua (22-1, 21 KOs) is going to make improvements in his game, but he’s so far behind where Ruiz Jr. is at right now in the boxing skills department that he’s probably going to lose to him again. AJ is risking his career in taking this rematch straightaway rather than waiting a while, but this is what he wants.