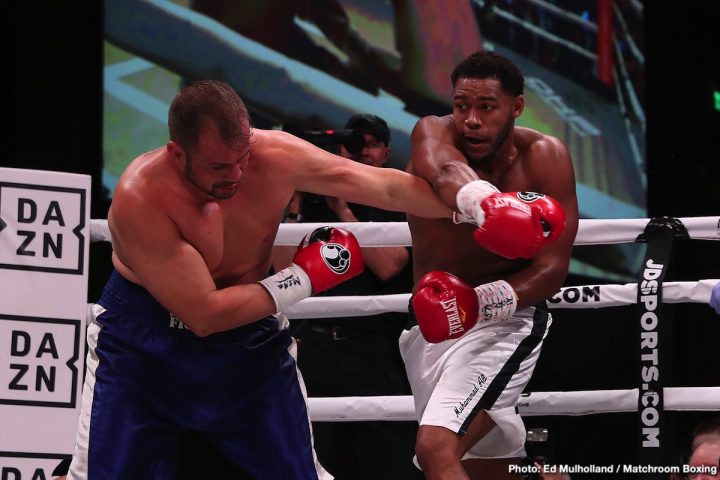 By Kenneth Friedman: 2012 Olympian Michael Hunter (17-1, 12 KOs) will be returning to the ring to face unbeaten heavyweight contender Sergey Kuzmin (15-0, 11 KOs) in September, according to Tass. There still isn’t a date yet for the Hunter-Kuzmin fight, but that should be announced soon.

The news of these two fine heavyweights facing each other next had already been revealed by VADA last week, but now it’s been confirmed. Kuzmin’s manager Vadim Kornilov has confirmed that he’ll be fighting Hunter next. This is a good crossroads fight for the two heavyweights. The winner moves on to bigger, and better things, while the loser will need to pick up the pieces and attempt to rebuild.

Hearn has a lot of options for Hunter in terms of fighters that he can match him against in his stable of heavyweight. Thus far, Hearn hasn’t shown interest in putting Hunter in with any of his gems in Anthony Joshua, Dillian Whyte or Filip Hrgovic. Some boxing fans believe Hunter is capable of beating those fighters. Hunter’s only career loss came against Oleksandr Usyk in 2017, and he game the 2012 Olympic gold medalist problems.

Kuzmin, 32, has looked good recently in beating David Price, Joey Dawejko, LaRon Mitchell and Jeremiah Karpency. Price was giving Kuzmin some things to think about in the first three rounds before having to bow out after the fourth round due to a torn biceps. There were more a few boxing fans that were less than enamored with Kuzmin’s performance against Price up to the point of the fight being stopped.

Sergey Kuzmin turned pro in 2013 after a fine amateur career in his native Russia. Although Kuzmin never made it to the Olympics for his country, he finished his amateur days with a 227-23 record.

Povetkin to fight on Lomachenko vs. Campbell undercard on August 31

Heavyweight Alexander Povetkin (34-2, 24 KOs) has been added to the undercard of next month’s fight between lightweights Vasiliy Lomachenko and Luke Campbell at the O2 Arena in London, England. There’s no word yet who Povetkin will be fighting on the card. Given that the fight date is one month away, it’s not likely that Povtetkin will be matched tough. It’ll likely be more of a stay busy fight for the 2004 Olympic gold medalist.

The fight card will be shown on Sky Sports Box Office in the UK, and on DAZN in the U.S.  Former WBA champion Povetkin, 39, last fought in September last year in losing to former IBF/WBA/WBO champion Anthony Joshua by a seventh round knockout.